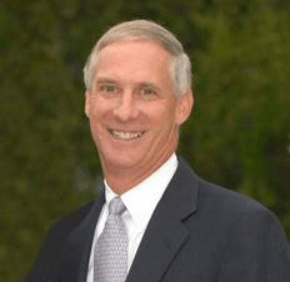 James B. Sellinger says it was his “wakeup call.”

While in New York working with a company taskforce nearly two decades ago, the 41-year-old IBM executive went into convulsions.

A clot in his left anterior descending coronary artery was the culprit, triggering a heart attack. His three children gathered in the basement of their Baltimore home, lit a candle and prayed the rosary for his survival.

“I should have been a dead man,” said Sellinger, who had been in charge of IBM’s Maryland-area operations. “God gave me a second chance. It was one of those defining moments that shape what you do with your life. It made me think, ‘Maybe I ought to think about what I can do to give back.’ ”

After a 35-year career with IBM that included service as head of its technical support for North America and running product sales in the Southeast, Sellinger is coming out of retirement to take on a new role that’s all about “giving back.”

The longtime parishioner of the Cathedral of Mary Our Queen in Homeland became the first-ever chancellor of education for the Archdiocese of Baltimore Aug. 1.

In the newly created position, Sellinger will be responsible for promoting the enrollment and fiscal health of approximately 50 Catholic schools. He will work closely with Dr. Barbara McGraw Edmondson, superintendent; and Frank Bramble Sr., newly appointed chairman of the archdiocese’s board of education.

Edmondson said she is “excited to partner” with Sellinger, viewing her colleague’s business and sales background as an asset to a collaborative team of administrators.

“The reality is that part of the schools system is about the business of schools – enrollment, finance, fundraising, facilities,” she said.

Sellinger offers “the gift of expertise and insight,” she said.

The new chancellor’s overall objective is “effective Catholic schools brand marketing that would help us drive a better coordination of public and private fundraising so we can stabilize tuition,” he said.

Born in Cincinnati and raised in St. Louis, Sellinger is the youngest of nine children. Francis J. Sellinger, his father, was a master brewer and chief executive officer of Schlitz Brewing Company.

Sellinger’s parents enrolled all their children in Catholic schools, and James Sellinger and his wife of 35 years, Francine, followed that tradition. All of their children attended School of the Cathedral of Mary Our Queen and the University of Notre Dame in South Bend, Ind., his alma mater. Two daughters went to Notre Dame Preparatory School in Towson and a son attended Loyola Blakefield in Towson.

“Catholic schools do a great job of building mind, body and spirit,” Sellinger said. “That’s the foundation for the future.”

The white-haired chancellor has special regard for his late uncle, Jesuit Father Joseph Sellinger, former president of what is now Loyola University Maryland in Baltimore. During his long tenure as college president, Father Sellinger worked with state lawmakers to establish funding for private universities. The funding stream is today known as the “Sellinger formula.”

As James Sellinger prepares to promote long-sought business tax credits benefiting public and nonpublic schools in Maryland, he looks to his uncle for inspiration.

“My uncle was a phenomenal visionary,” Sellinger said. “He did a really good job of building bridges – business, public, Catholic, Jewish – there was no fence that he didn’t jump over. I’m praying to him that he will give me the guidance to help me accomplish what he did.”

Sellinger said he was eager to visit schools, reach out to business leaders and meet educators. One of his guiding principles was already sitting on his desk three days into his job, where a small sign warned that the most dangerous words in the English language are, “That’s the way we’ve always done it.”