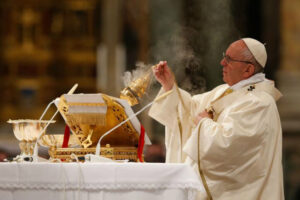 Q. On the feast of the Epiphany, I left Mass coughing and with a headache due to the large amount of incense used. I spoke to the celebrant after Mass, and he told me that the incense was part of the Mass and that I would just have to get used to it. I also talked to our pastor, but he offered no solution.

Again, at Easter Mass, I was not able to tolerate the incense. Because I am a volunteer accompanist with our music ministry, I entered the church only when I needed to play and spent the rest of the time in a community room where there was fresh air. Once again, I left with a cough and a headache which persisted for two days, and many other people complained about headaches and burning eyes.

So my questions are these: Which liturgies during the year require the use of incense, and wouldn’t it be appropriate for a parish to warn parishioners when incense is going to be used? (East Windsor, New Jersey)

A. The use of incense at worship services has a long history, dating back to the Old Testament. The smoke of the burning incense is seen as symbolizing the prayers of the faithful rising toward heaven, and the act of incensing pays honor to the object to which it is directed — whether the just-consecrated bread and wine at their elevation or the remains of the deceased at a funeral Mass.

Strictly speaking, though, there is no absolute requirement that incense be used at any particular Mass. Typically, parishes limit its use to Masses of particular solemnity, funerals and services that include eucharistic adoration and processions.

Given that a certain number of people have respiratory problems that can be exacerbated by the smell of incense, a reasonable balance should be struck. Perhaps a certain area of the church can be reserved where worshippers would be less affected. If the church is too small for that to work and the celebrant knows in advance that someone who is particularly vulnerable may attend, I see no problem with foregoing the use of incense at that particular Mass.

And yes, I do recommend letting parishioners know in advance when incense will be used. One Catholic parish in Connecticut, for example, notes on its website that “we will never use incense at the Sunday 8:00 a.m. Mass. … Incense will be used at the Sunday 10:15 a.m. Mass on the following feasts: the Epiphany of the Lord; Easter Sunday; Pentecost Sunday; the solemnity of the Body and Blood of Christ (Corpus Christi); the solemnity of Jesus Christ the King.”

Q. We live in an area where a number of homeless people routinely hold up signs on street corners asking motorists for cash. Up until now, I have been giving them money every so often, as long as they seemed harmless enough. But our city recently put up signs asking the public not to give them money and posting information on where the homeless can go for assistance.

So my question is: Should I continue to hand them money or stop doing so? I am in my 70s and am concerned about crime, and I also am aware that some of these people may just use the money for drugs and alcohol. But I feel guilty passing them by, as God has given me much and I do want to help. How can I tell whom to trust and who might not be so needy? (Hampton, Virginia)

A. It’s an excellent question, and there are compelling arguments for a wide range of answers. I fully understand the reasons for discouraging the practice. For one thing, stopping motorists on street corners can imperil traffic safety; even more, channeling the needy to a social services agency promises a solution far more permanent.

But speaking personally, I find it hard to pass a person by — and I regularly offer a few dollars. In doing so, I feel the backing of Pope Francis, who told an Italian journal in 2017 that helping someone in need “is always right,” — even allowing for the possibility that it might be spent on a glass of wine. It’s important, said the pope, to reach out “by looking them in the eyes and touching their hands.”

As for being able to distinguish between one who is legitimately needy and a “professional panhandler,” the answer is: You can’t always tell. But if I’m going to be wrong, I would rather be wrong on the side of kindness.