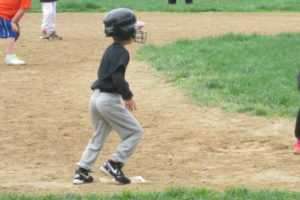 “Put on your shoes,” I told them. “We’re going to baseball practice.”

As an afterthought, I told Daniel’s big brother to bring his glove. The coach had mentioned we might have a scrimmage, and this late in the season—with a consolation game on the schedule for Saturday—there was a chance they could use another player for the practice.

I guessed right. The coach invited him to join the team for the night, and Leo was thrilled. He asked to play first base, got a hit at each at-bat, and slipped right into his role—even though he has never played little league before.

At one point Daniel came over to me and very kindly said with his sweet little smile, “You could play too, Mama, but you’d be super bad, and you don’t have a glove.”

He’s also right that I would be super bad. I play baseball in the backyard with our boys, and they know my abilities. I can sort of pitch to them, but only out of necessity. 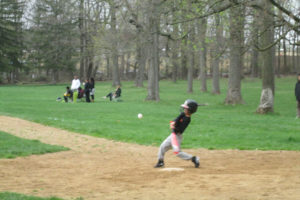 But as I looked at our 7-year-old smiling up at me, I knew he wasn’t trying to insult my athletic skills. And I wasn’t offended.

The truth is that there is a reason my softball career began and ended the same season, the year I played for the Green Hornets. I can’t recall what inspired me to sign up to play. But I spent most of the season in right field.

I don’t remember getting any hits, though I may have. I must have walked occasionally, right? What I do recall was that the last out for our team for the season was mine, as I struck out and stranded a few teammates on base. The game ended, our chance at moving on in the tournament vanished, and the season was over.

You might think that kind of experience would be devastating. And I do remember it vividly. But even in my memory of the moment, I recall thinking that maybe it was better that I was the one who struck out and not some super-talented, ambitious softball player who would have been more upset.

After all, someone has to lose. Someone has to fail. And it might as well be someone who never thought she had much of a softball career to begin with.

I gave up on softball. But I did discover that I loved being part of a team. In high school when a few friends decided to form a third squad basketball team, I happily joined and played.

Later, when the girls’ lacrosse team needed another team manager, I volunteered. I sat on the sidelines, keeping track of who scored which goal and who assisted and all the rest. That team, the 1994 Roland Park Country School lacrosse team, was extraordinary and went on to win the championship. And a few years after graduation, when the team was elected to our high school hall of fame, I was inducted into the hall of fame with them.

So you see, God has a sense of humor. And he knows you can be super bad at something and still serve a role He has carved out just for you.

You need to show up and smile and do what is asked of you. And you just might not need a glove.

Joining Theology Is a Verb, Reconciled to You, and other talented bloggers for Worth Revisiting Wednesday on June 28, 2017.