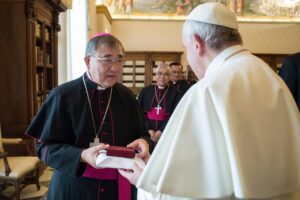 Editor’s note: Each day leading up to the Nov. 28 consistory in Rome that will create 13 new cardinals, the Catholic Review will offer a profile of one of the new cardinals. The profiles will appear in the order in which Pope Francis announced the appointments.

Asia’s cardinal-designate from Brunei said the church in his country is “the periphery within the periphery.”

“I believe that the institutional church in many large countries, to be honest, is not giving a good witness (to faith),” Cardinal-designate Sim told ucanews.com. “I don’t want to be judgmental, but it is always about controversies and conservative-liberal tensions that you read. It seems like the church is a joyless institution, and people do not live in any sense of vibrant attachment to the faith. We are all about arguments, beating one another, and trying to push antithetical views to one another. That’s not a very pleasant picture of the church.

“I believe the church lives in the peripheries, the faith is alive in the smaller countries,” he added. “I think Pope Francis acknowledges that. As part of the universal church, the church in Brunei contributes to building a peaceful society here. I think the pope recognizes these things.”

Cardinal-designate Sim and three priests take care of Catholics in one of the few absolute Muslim monarchies left in the world. They work in an apostolic vicariate, a church jurisdiction in mission regions where the Latin-rite Catholic hierarchy is not yet fully organized. The vicariate has about 21,000 Catholics, mostly migrants.

Father Arin Sugit, the bishop’s assistant at Our Lady of the Assumption Cathedral in the nation’s capital, explained to ucanews.com that about 70% of the diocese’s Catholics are migrant workers from the Philippines. Another 20% are from other countries such as Indonesia, India and Malaysia. Only about 10% are indigenous Bruneians, he said.

The cardinal-designate said migrants “are the life of the church.”

“For example, Filipinos are accustomed to music, dance and generally have a very contagious worship style. So, they add that to the church,” he said.

Cardinal-designate Sim, 69, chuckled when he told ucanews.com: “I cannot say my parents were extremely pious. But my mother always prayed a lot, always. My father was not very pious. We lived very near the church. But he would arrive for Mass when the Gospel is read and leave about the Communion time. However, they always impressed on us that we were Catholics.”

He has two engineering degrees — one earned in Kuala Lumpur and one in Scotland.

“When I left school, I also stopped practicing my faith,” he told ucanews.com. “For many years I didn’t practice my faith very well, until I was 30 years old.”

“After my father died in 1979, I began to appreciate … that life is not just about accumulating wealth. But it has to do with something more than what we see here. What happens when you go from here? These questions kept on bothering me until 1981.

“After spending a year in Europe working, I came back, and God sent a priest to see me and talk to me about these things. He brought me back to the church, and I started going to church and got involved in the parish council and youth ministry. In 1985, after five years of coming back to the church, I left my job mainly because, as an engineer, you ask many questions, and simple answers do not always satisfy you.”

He accepted an offer from his bishop to send him to study theology in the United States and graduated with a degree in theology from the Franciscan University of Steubenville, Ohio, in 1988.

In 2004, Cardinal-designate Sim was named bishop of Brunei. He noted the seven priorities in the vicariate: “Bible literacy, adult faith formation, youth, promotion of vocations, witnessing to Christ, social welfare for people, especially migrants, and focus on family.”

“It is really about building a strong Christian community around these principles,” he said.

Brunei is a country of about 2,200 square miles — slightly larger than the U.S. state of Delaware of the Canadian province of Prince Edward Island — located entirely on the island of Borneo, which is also home to parts of Malaysia and Indonesia.

One of the richest nations in the world, Brunei also has one of the lowest populations in Asia — just 429,000 people. Christians form some 10% of the population; half of them are Catholics. Malay is the official language, but English and Chinese are spoken widely.

The laws in Brunei allow Christians to practice their faith inside homes and churches, and the cardinal-designate said “there is not much ostentatious display outside of the church and outside of the home.”

“Our faith is not a private thing, but our faith is also not to be displayed inappropriately. We have to understand each other’s sensitivities; certain inappropriate displays and expressions may provoke reactions. We need to be sensitive.”

He said churches are packed on Sundays and feast days like Christmas, which is a public holiday.

“On Christmas Day, for example, many Masses are celebrated in packed churches, and carols are sung. These things are not controversial. You can ring your church bell, too, no problem. When the Mass is on, we can also use the public address system outside the church — of course, at a reasonable level. Being sensitive is important; always remember others also have their own faith.

“The real emphasis of evangelization is giving witness to Christ,” he added. “The best witness to Christ is to lead a life of simplicity with a commitment to Christ’s teachings. The love for our neighbors is the biggest evangelization tool available to us. We do not engage in public rallies and colorful processions. That is not our style. Our way is much quieter, the way of St. Francis of Assisi. He is our model.”