VATICAN CITY (CNS) — One by one 11 senior churchmen, including two U.S. citizens — Cardinals Wilton D. Gregory of Washington and Silvano M. Tomasi, a former Vatican diplomat — knelt before Pope Francis to receive their red hats, a cardinal’s ring and a scroll formally declaring their new status and assigning them a “titular” church in Rome.

But with the consistory Nov. 28 occurring during the COVID-19 pandemic, Pope Francis actually created 13 new cardinals.

Cardinals Jose F. Advincula of Capiz, Philippines, and Cornelius Sim, apostolic vicar of Brunei, did not attend the consistory because of COVID-19 travel restrictions; however, they are officially cardinals and will receive their birettas and rings at a later date, the Vatican said.

In his homily at the prayer service, Pope Francis told the new cardinals that “the scarlet of a cardinal’s robes, which is the color of blood, can, for a worldly spirit, become the color of a secular ’eminence,'” the traditional title of respect for a cardinal.

If that happens, he said, “you will no longer be a pastor close to your people. You will think of yourself only as ‘His Eminence.’ If you feel that, you are off the path.”

For the cardinals, the pope said, the red must symbolize a wholehearted following of Jesus, who willingly gave his life on the cross to save humanity.

The Gospel reading at the service, Mark 10:32-45, included the account of James and John asking Jesus for special honors. “Grant that in your glory we may sit one at your right and the other at your left,” they said. But Jesus reproaches them.

“We, too, pope and cardinals, must always see ourselves reflected in this word of truth,” Pope Francis said. “It is a sharpened sword; it cuts, it proves painful, but it also heals, liberates and converts us.”

According to canon law, cardinals are created when their names are made public “in the presence of the College of Cardinals.” While many Rome-based cardinals attended the consistory, more members of the college were “present” online.

The pandemic also meant the gathering was unusually small; each cardinal was accompanied by a priest-secretary and could invite a handful of guests, so there were only about 100 people in the congregation at the Altar of the Chair in St. Peter’s Basilica.

Also missing were the “courtesy visits,” a reception lasting several hours in the early evening when the general public was invited into the Vatican to greet the new cardinals.

In addition to some Rome-based cardinals, the congregation at the consistory included the pastors or rectors of the 13 Rome churches to which the new cardinals were associated. Cardinals are given a “titular” church in Rome, formally making them members of the Rome diocesan clergy, which is what the church’s first cardinals were.

In fact, the formula for the creation of cardinals, recited in Latin by Pope Francis, says, “It chiefly concerns the church of Rome, but it also affects the entire ecclesial community: We will call certain of our brethren to enter the College of Cardinals, so that they may be united to the Chair of Peter by a closer bond to our apostolic ministry.”

Cardinal Gregory’s titular church is Immaculate Conception parish on the ancient Via Flaminia in the Grottarossa neighborhood of northern Rome. The church was built in 1935 and became a titular church for cardinals in 1985.

Cardinal Tomasi’s titular church is the Basilica of St. Nicholas in Prison, a 12th-century church with a 16th-century facade built on the site of an earlier church that was constructed over the ruins of an ancient temple.

Mexican Cardinal Felipe Arizmendi Esquivel, retired bishop of San Cristobal de Las Casas, Mexico, told Vatican News Nov. 27 that the new cardinals are called to reconfirm their commitment to making Christ the center of their lives and “to collaborate with the pope in his ministry as bishop of Rome, and so we are assigned a parish in this city, as a sign of communion between that community and the one who presides over this local church, which is the pope.”

Maltese Cardinal Mario Grech, secretary-general of the Synod of Bishops, was the first mentioned by the pope Oct. 25 when he announced he was creating new cardinals. As such, it fell to Cardinal Grech to address the pope on behalf of the new cardinals.

“Convoked in consistory at such a serious time for all humanity because of the pandemic, we want to turn our thoughts to all our brothers and sisters enduring hardship,” the cardinal said. He prayed that people would react to the pandemic as an “opportunity to rethink our lifestyles, our relationships, the organization of our societies and, especially, the meaning of our lives.”

Cardinal Grech also led the others in the recitation of the Creed and of an oath of fidelity and obedience to Christ and his church and to Pope Francis and his successors.

Cardinal Gregory, like the other new cardinals coming from outside Europe, was tested for COVID-19 before flying to Rome and again upon arrival. Even after testing negative, he and the others were required to quarantine for 10 days and were tested again immediately before the consistory. Cardinal Gregory stayed at the Domus Sanctae Marthae, where Pope Francis lives, and his meals were left outside his door.

In an interview with Catholic News Service, the cardinal said he hopes Pope Francis will find him to be “supportive, encouraging and trustworthy” in his role as a cardinal, but his primary ministry is still to be the archbishop of Washington.

Of course, he said, he regrets that “my two sisters are not here, and the many people I know and love from Chicago and Belleville (Illinois) and Atlanta and Washington,” who were watching the livestream instead.

One of Cardinal Tomasi’s guests was the pastor of his boyhood parish, San Rocco in Casoni di Mussolente, a town of fewer than 8,000 people in northern Italy. In the past 80 years, the cardinal told CNS, the parish has produced more than 100 priests and religious sisters, “and now also a cardinal. I hope it will help to continue the flourishing of vocations from the parish.”

With the consistory the College of Cardinals now has 229 members, 128 of whom are under the age of 80 and eligible to enter a conclave to elect a new pope. Pope Francis has given the red hat to 57% of electors.

With Cardinals Gregory and Tomasi, who was born in Italy but is a U.S. citizen, the number of U.S. cardinals rose to 16; nine of them are cardinal electors.

Entering the college Nov. 28 were Cardinals:

— Marcello Semeraro, an Italian who is prefect of the Congregation for Saints’ Causes, 72.

— Mauro Gambetti, custos of the Sacred Convent of Assisi in Assisi, 55.

More on the 2020 Consistory 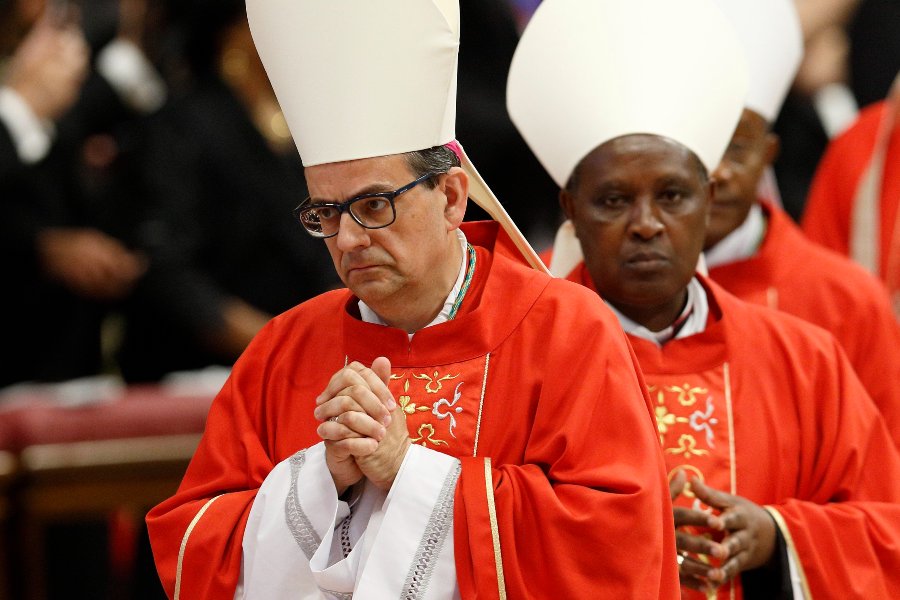 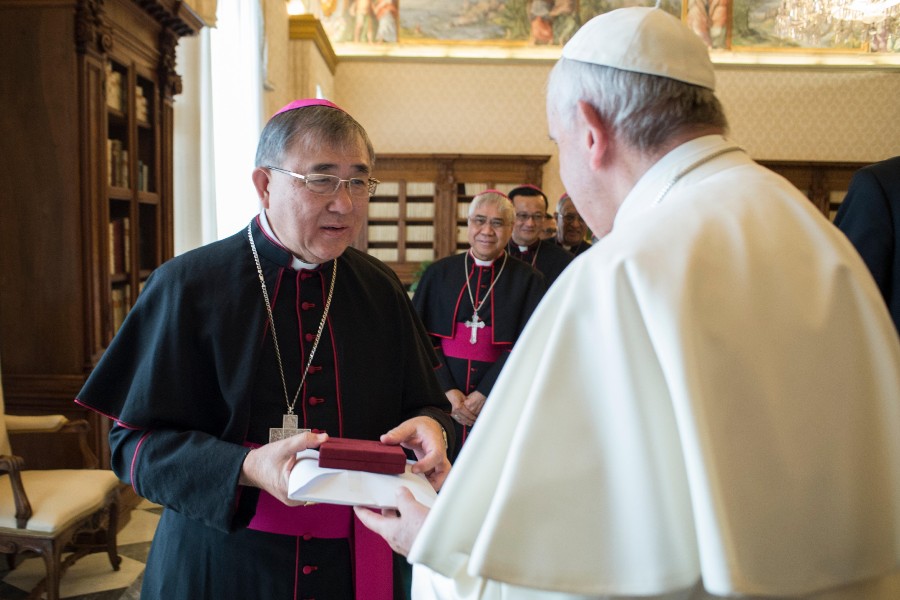 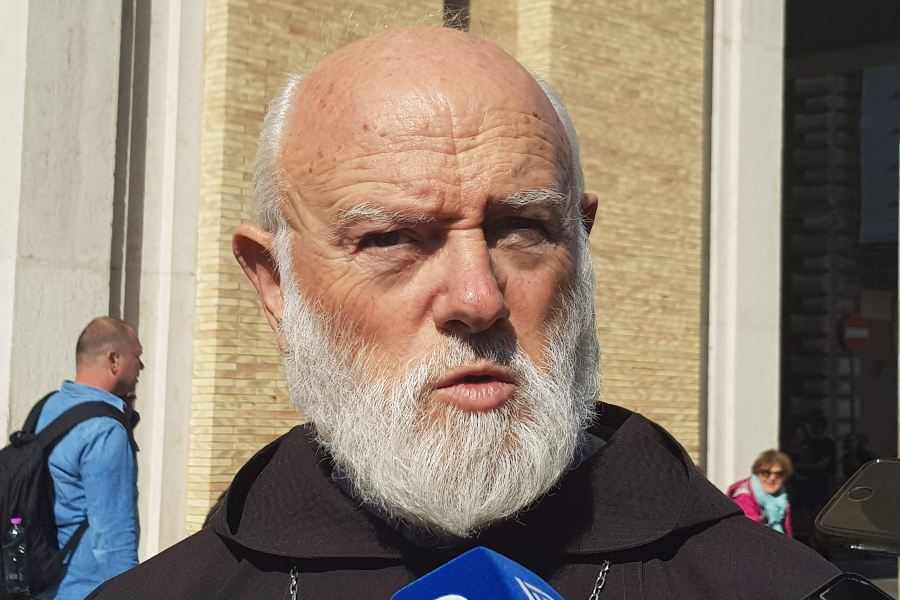 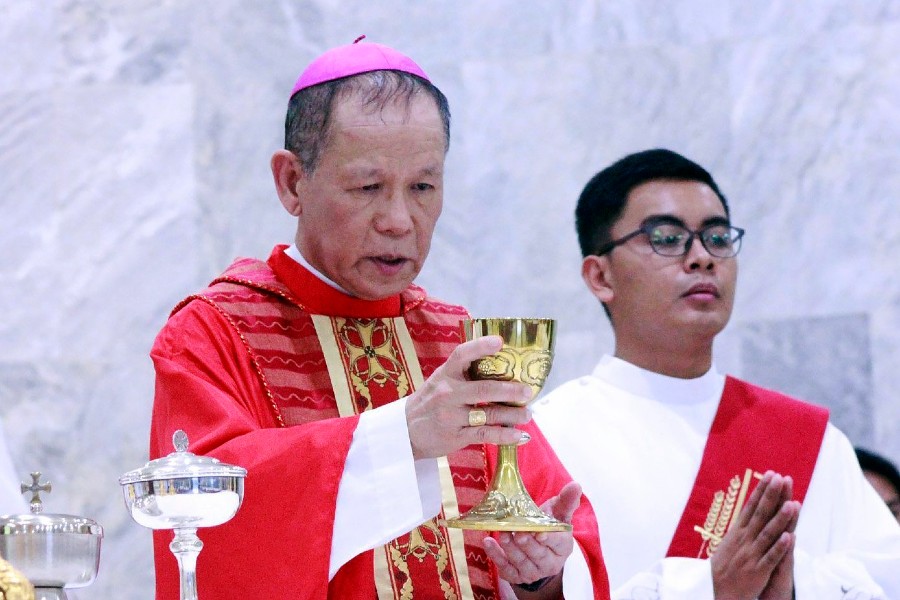 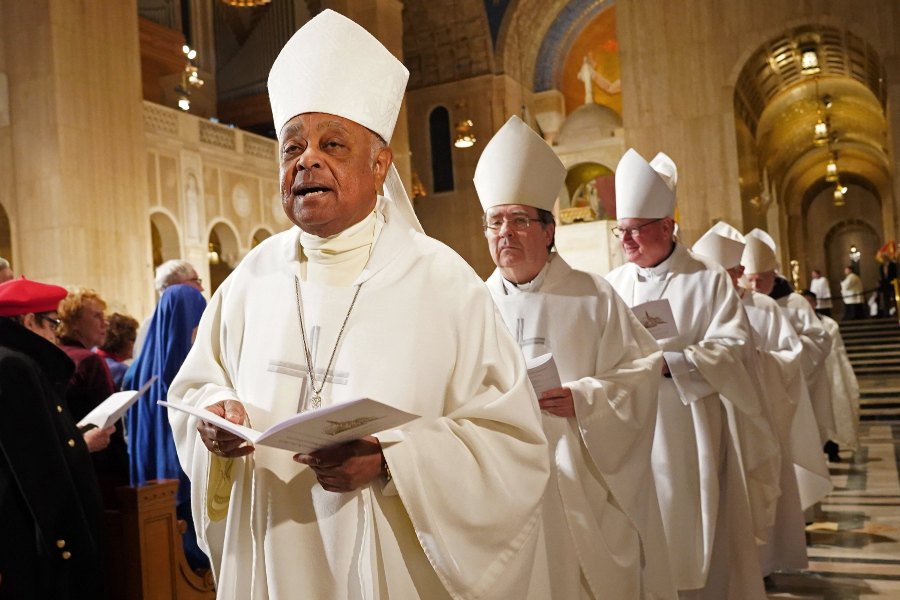 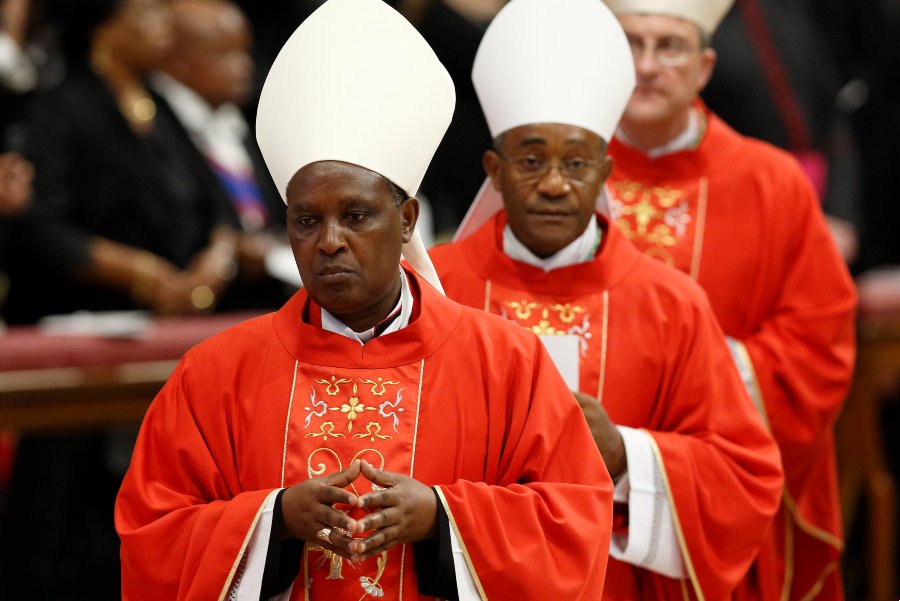 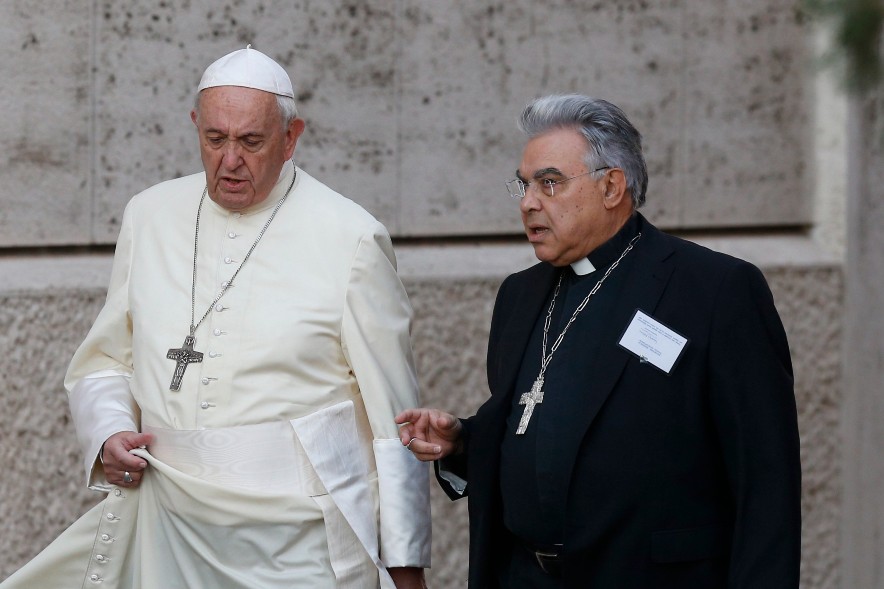 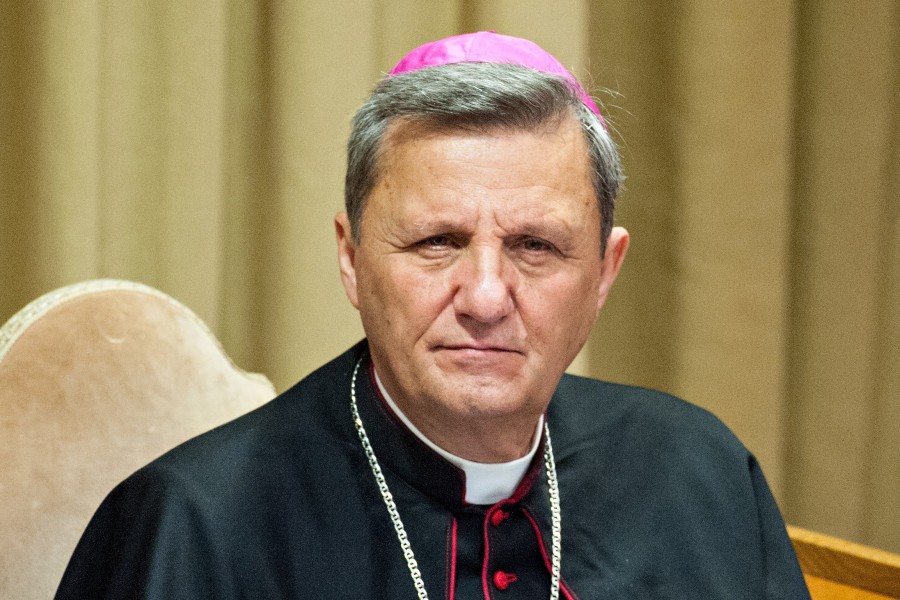 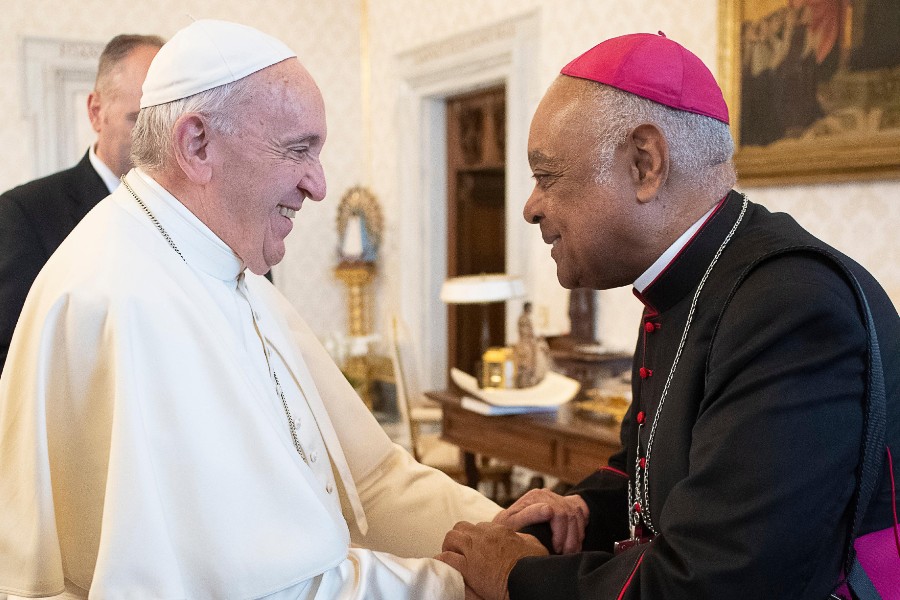 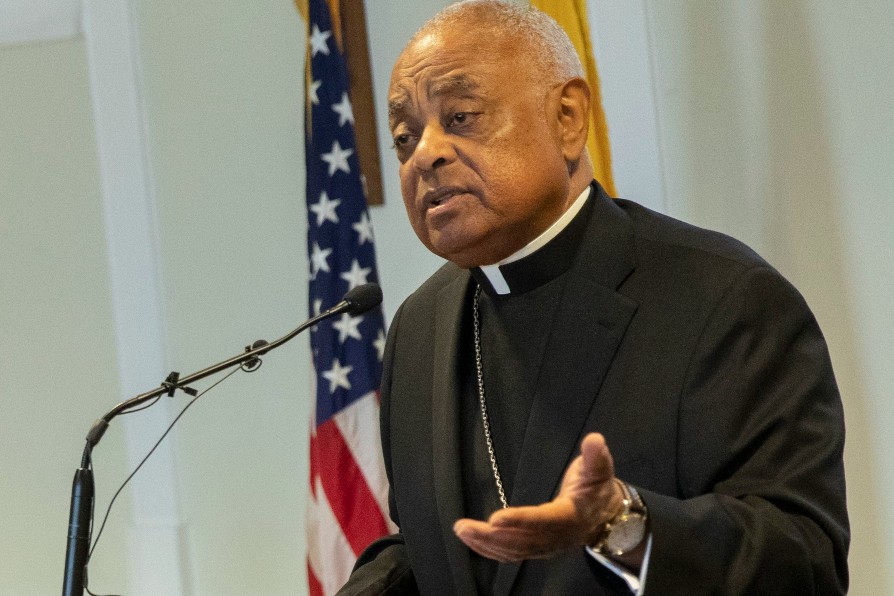