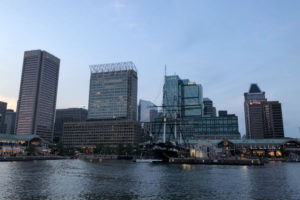 The last two months have been awash in chance encounters that only happen in Baltimore. (That, and acquaintances compound with advancing years.)

Start with the cover story in our March issue, which featured Chris Oswald depicting St. Patrick. I interviewed Oswald over the phone Feb. 1, the day of the IND-Mercy basketball game. Once an IND dad, always an IND dad, and Oswald said he would be at The Game; maybe we would bump into each other.

Sure enough, making the rounds on the concourse at Towson University’s SECU Arena that night, I spotted another IND dad, Roy Shaw, a cousin of my brother-in-law, Rich Wojciechowski. Shaw introduced me to Oswald as they said in unison “We were just talking about you.” Turns out Oswald joins the Ravens’ tailgates run by my brother-in-law. He promised to make the McMullen/Wojciechowski St. Patrick Day Party at the Patapsco State Park, and autograph the cover for me.

(Pertinent diversion: Wojo borrowed a truck to help Mary and I move into our first home, on Herring Run Park, in 1985. The box truck advertised the Shaw and Sons circus, and had a clown painted on the side. Mr. O’Keefe, a late, great Archbishop Curley High dad and neighbor, never let me forget that first impression: the circus really was in town.)

Our March issue also included a feature on a special needs prom at Our Lady of Perpetual Help Parish in Ellicott City.  The story idea was pitched by Michele Gilmore, the organizer of the event. It wasn’t until I was editing Emily Rosenthal’s article that I found that Michele is the mom of Camden Gilmore, a Loyola Blakefield senior who’s been the leader of the Dons’ recent run of MIAA cross country titles. Camden was first recognizable through his father, Mark, an equally strong runner for Westminster High in the 1980s and then the U.S. Naval Academy. Camden, incidentally, is headed to Georgetown University.

Editing our April issue, I was stopped at the fact box for Deacon Matt Himes, who will be ordained a priest in June. Under family, it listed “son of Tom and Betty Himes,” which led to the following email exchange with Deacon Matt.

By chance, does your dad work in the swimming business?

Yes, my dad is the head coach of NBAC! Do you know him??

Do I know him? I interviewed and wrote Deacon Matt’s father, when I was the Summer Olympic correspondent for The Sun. Some of Michael Phelps’ earliest successes with the North Baltimore Aquatic Club came under the coaching of Tom Himes. Know anyone else who has nurtutred a GOAT (greatest of all time) and a priest?

The April issue concluded with an Amen essay on Father Jeff Dauses, kidney donor.  Visiting Father Jeff at Johns Hopkins, he recalled all the nurses and surgeons he kept running into who were parishioners of St. Francis Xavier Parish in Hunt Valley, where he had ministered in the early 2000s. Father Jeff dropped the name of Dr. Pat Walsh, and emailed a talk from the pioneering Hopkins urologist. I emailed back a link to a 2017 article on prison ministry that featured the very same Dr. Walsh.

As for Cindy Edwards, the woman who got Father Jeff’s kidney, she is progressing nicely, well enough to join the crowd she grew up with at a St. Clement I Parish basketball reunion April 7.  Cindy is an old friend of Madalen McKenna Kight, whose father will be honored at the reunion. When Madalen forwarded a team photo that included her dad and two of the Grace brothers, my jaw dropped.

It was from 1969, at the Sweet 16 tournament at Mount St. Joseph High School. My St. Rose of Lima eighth-grade team didn’t just play in that very same tournament, we were in some of the same leagues that included St. Clement I, the Graces and McKennas.