Ninth in a Series

Every saint has a past, and every sinner a future.

In addition to the Bible, Father Collin Poston quotes Oscar Wilde in explaining the nature of prison ministry.

“All the people in Matthew 25 are in prison, or sick,” Father Poston said. “All the people that Jesus points out weren’t in the ‘club.’ Responding with mercy to the people the Gospel writers mention, that’s what we’re supposed to be about as Christians.”

Father Poston is the pastor of two parishes in northern Frederick County, but he supports a program for ex-offenders begun by one in Hagerstown and a budding ministry for former prisoners begun by a fellow priest of the Archdiocese of Baltimore.

Behind bars and post-release, men, women and juveniles receive spiritual guidance provided from those who heed the call of Bishop Denis J. Madden, who, in a 2015 column for America magazine, outlined the need to rehabilitate, redeem and reintegrate “those who have made poor choices.”

“Christ is teaching us one thing,” Bishop Madden told the Review. “People make mistakes, and that we have to be willing to forgive.” 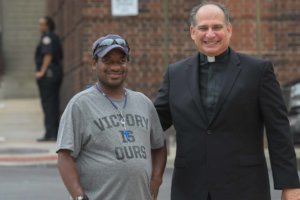 In the nearly 228-year history of The Premier See, it is unlikely that anyone has given more to prison ministry than Father Charles Canterna, in the field full time  since 1982.

Known as “Father Chuck,” he was inspired to consider the priesthood by the principal of his Catholic school in Freeport, Pa., who saw him constantly entering St. Mary Church.

“Some guys have told me they could not walk past a bank without stopping to rob it,” said Father Canterna, 69. “With me, I couldn’t walk past the church without wanting to pray, fourth through eighth grade. It was a powerful experience.”

Moved by the civil and social unrest of the late 1960s, he came to Baltimore to study at St. Mary’s Seminary and never left. Ordained in 1976, he began as a “street priest.”

“Work with the needy, the poor and the homeless, you’re going to end up (visiting them) in jail,” Father Canterna said. “They get arrested.”

He is a chaplain at the Maryland Penitentiary Complex, an alphabet soup of six facilities visible to commuters departing downtown Baltimore on the Jones Falls Expressway. His ministry has included those on death row.

Maryland abolished the death penalty in 2013. Wesley Baker, a convicted murderer, was the last person executed in the state, in December 2005. Father Canterna spent much of Baker’s final two months with him, in what turned out to be a rolling confessional.

Father Canterna’s day typically begins with 7 a.m. Mass for inmates. He shares the sacraments with Catholics, and noted that prison ministers “are not allowed to proselytize.” He listens to all and has fasted at Ramadan, in unity with those practicing Islam.

“I found Christ in these men, and they shared it with me. It didn’t matter whether they were Muslim, Hindu, Buddhist, there was a respect,” Father Canterna said. “The key is love. The key is your presence, your oneness with that person. You have to give of yourself, like Jesus did.”

The United States has the highest per capita rate of incarceration of any nation on the planet. Maryland’s prison population (those sentenced to 18 months or more) numbers nearly 21,000, at an annual estimated cost of almost $800 million.

The last two years have ended with the highest murder rates in the history of Baltimore, and 2017 is unfolding at a murder-a-day pace. With repeat offenders contributing to that bloodshed, wouldn’t the region be safer if they were locked up for good?

“Intellectually,” Bishop Madden said, “if anyone would take the time to look at it, our system makes no sense, with 70 percent of the people going back to prison. If you bought a car and 70 percent of the time it didn’t work, you’d say, maybe I shouldn’t buy another car from that dealer.”

Deacon Martin Wolf has done his part to reduce recidivism.

Ordained to the permanent diaconate in 2005, he was among the clergy serving prisons in the city until recently, when he began work in youth ministry at St. Margaret Parish in Bel Air.

“You enter with the attitude, ‘people in prison are bad,’ and you’re doing something good,” Deacon Wolf said. “It’s more about building relationships, than an ‘I will help you’ experience. Those guys had as much to do with my spiritual growth as I did with theirs.”

William Gaertner and Steven Allbright were among the men Deacon Wolf encountered at the Metropolitan Transition Center. Both of their lives had unraveled in addiction and convictions for domestic violence.

“Ninety percent of the time, it was me in a room, meditating by myself,” Allbright said. “Then Bill (Gaertner) and Marty (Deacon Wolf) invited me to join them. Marty introduced me to Thomas Merton. After reading Merton, I was not going to sit by myself on Monday nights.”

Father Poston also aided the recovery of both men.

Gaertner came to Baltimore 50 years ago, as a seminarian at St. Mary’s in Roland Park. Upon his release from prison in 2013, he relocated to Hagerstown. He attended daily Mass at St. Mary Church, where Father Poston was the pastor. With his support, in 2014 Gaertner founded Gatekeepers, which helps ex-offenders find education, employment, transportation and alcohol- and drug-free housing.

“We (Catholics) do a good job with the spiritual works of mercy,” Gaertner said. “Can we provide corporal works for returning citizens?”

Released in spring 2014, Allbright went to culinary school, found stable restaurant work and was the first hire of The Table Foundation. The newest ministry begun by Father Leo Patalinghug’s “faith, family and food” movement, it aims to offer employment and transitional housing to ex-offenders.

Father Poston serves on its board, as chaplain. Through Gaertner, they connected Allbright to Father Patalinghug, who hired him as culinary director/administrator.

“My biggest fear was letting him (Father Patalinghug) down,” Allbright said. “With my learning curve, most people would have gotten tired of me.”

Joseph F. Clocker, a parishioner of St. Francis Xavier in Hunt Valley, directs the Division of Parole and Probation for the Maryland Department of Public Safety and Correctional Services.

“Successful probation requires strong partners,” he said. “Prison ministry can build a sense of community, belonging. Too many, once they’re released, don’t continue that relationship. It’s important to continue the work that was started behind walls.”

Ray Kelly is the co-director of the No Boundaries Coalition, housed on the campus of St. Peter Claver Parish, where he is vice chairman of the executive committee.

A decade ago, when he was imprisoned for his knowledge of a murder conspiracy, he remained connected to Josephite Father Joseph Del Vecchio, an associate pastor at the church.

“He visited and sent words of inspiration,” Kelly said. “I was kept in the loop and felt part of the church. I had outside engagement that a lot of inmates don’t have. This church was also a big support when I came home.”

Deacon Seigfried Presberry, a convert to the faith and a former correctional officer, is director of prison ministry for the archdiocese. The effort includes not only religious, such as Sister of St. Joseph Kathy Clafin serving the women’s wing of the Baltimore City Detention Center, but also considerable lay involvement.

“We have more than 100 volunteers,” Deacon Presberry said. “Without them, the Office of Prison Ministry could not survive.”

Volunteers include members of the Order of Malta, such as Dr. Patrick Walsh. A distinguished professor of urology for Johns Hopkins, for 40 years he passed prisons on the way to his home in Baltimore County, where he is a parishioner of St. Francis Xavier.

After he stopped performing surgery, Walsh said, “I kept hearing Matthew 25, and finally said to myself, ‘Why don’t you get out of the car?’ Who was the last person Jesus spoke to? A prisoner (St. Dismas). When Jesus began his public life, the first thing he spoke about was freeing the prisoner.”

Walsh helps lead a Communion service every Tuesday night at the Maryland Reception and Diagnostic Classification Center. There are readings, a homily and discussion.

“People tell their stories,” Walsh said. “Everyone there is a sinner. They’ve all been convicted of a crime. They’ve got nothing to hide.”

The Least of These: Pro-life activism goes beyond sidewalk’s end

The Least of These: Welcoming the stranger

The Least of These: Helping victims of modern slavery become survivors

The Least of These: Stella Maris volunteers bring companionship, Communion to the dying

The Least of These: Despite stroke, Chris Conlon inspires church, family, friends