Sixth in a Series

Akosua Marfo-Sarbeng, a junior at Maryvale Preparatory School in Timonium, hopes to study neuroscience or biology in college.

Pepper aspires to be pediatric neurologist. Still a teen herself, she is motivated by a childhood that included, starting at age 8, caring for her parents and older siblings.

“I get to be a kid here, for once,” said Pepper, a pseudonym.

She spoke under a roof supplied by The Samaritan Women, a Christian nonprofit organization where the board leadership routinely includes a number of Catholics. Baltimore-based, it offers refuge and education for victims of human trafficking.

The control and movement of people for the purposes of sexual exploitation, forced labor, servitude or the removal of organs is considered one of the three most profitable criminal activities on the planet, alongside illicit drugs and weapons.

Victims are groomed in Bangkok, Belarus, Tijuana – and Towson.

“We’ve been educated about a (local) foot massage place that confiscates passports from its workers, but this isn’t just happening to people born overseas,” said Laura Marsico, who teamed with Marfo-Sarbeng to add the Araminta Freedom Initiative to the outreaches supported by Maryvale students. “This can happen to your daughter, or son, or a friend.

“That guy you think you know? He might be a potential pimp.”

“You can’t go through this by yourself,” she said.

While the English word “slave” is derived from the Slavic peoples who were captured and sold by ninth century Moors in Spain, the practice is mentioned in the Old and New Testaments, and Jesuits are making reparations for the use of slave revenue to open Georgetown University.

From “The Slave Next Door,” a 2007 book by Kevin Bales and Ron Soodalter: “Where antebellum masters took pride in the ownership of slaves as a sign of status, today’s human traffickers and slaveholders keep slaves hidden. … “

In Baltimore, identifying victims begins behind frosted glass in a section of the emergency department at Mercy Medical Center, which is sponsored by the Religious Sisters of Mercy.

Debra Holbrook heads its Forensic Nursing program, the only one in the city. It includes her and 34 other nurses whose jobs have grown from collecting evidence of sexual assault, domestic violence and other abuse, to identifying victims of human trafficking.

“Unless staff is trained in what to look for, they never make it to us,” Holbrook said, of victims. “We’re called in on these cases not because the patient has asked us to, but because staff has.

“It’s the same scenario you have with domestic violence. A patient in triage who doesn’t speak for themselves; a significant other, usually a male, doing all the talking for them.”

Holbrook described pimps supplying addictive drugs and telling victims that “their families will be killed” if they attempt to escape the prostitution that has been forced upon them.

“We’re looking for patients who are in somebody else’s control,” she said from her office, a few miles north of Interstate 95, the East Coast’s major corridor of illicit trade.

The Maryland Catholic Conference issued a joint statement from the state’s bishops April 3 regarding human trafficking, and announced a series of information sessions, in English and Spanish, at parishes from St. Joseph in Hagerstown to Salisbury on the Eastern Shore, where migrant workers are exploited.

“A lot of foreign nationals,” Holbrook said, “socialize within their cultural network, which is often centered around the Catholic Church.” 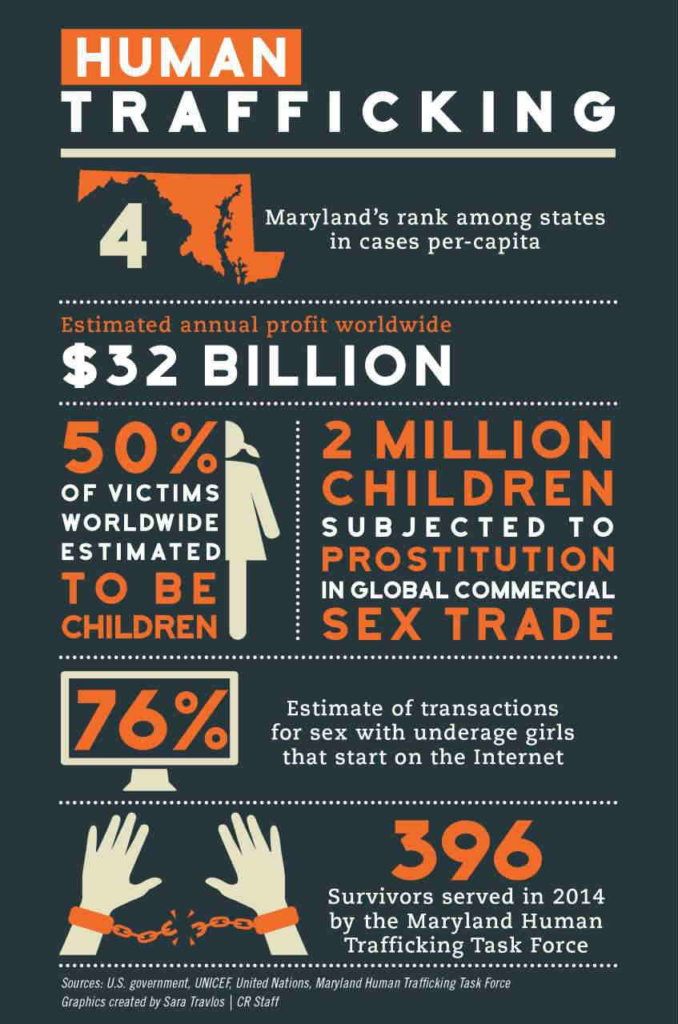 Priscila, 57, came to the U.S. in 2009 from the Philippines, ensnared in a scam that targeted teachers. Draining her life’s savings and borrowing from 14 lenders, she gave $30,000 to a recruiter, who had promised a classroom job in the U.S. Once here, she was forced into menial labor and threatened with deportation.

The Gabriela Network, which promotes “Philippine-U.S. mass solidarity,” pointed her to the Esperanza Center.

Over three months, Welsh helped Priscila and her husband pay hospital bills, get much-needed medical care and a T-visa, which allows victims of human trafficking to remain in the U.S.

“Without Maddie, I didn’t know we qualified,” Priscila said by telephone from her workplace in Washington, D.C.

Being adrift abets the grooming process, explained Jeanne Allert, executive director of The Samaritan Women, which has harbored Pepper and 59 other women from 19 states since 2011.

“A girl who’s recruited in Dundalk is not going to be trafficked there,” Allert said. “They’re going to take her to Detroit, then Des Moines. … Ninety-eight percent of our population (at The Samaritan Women) was molested as children. Returning home is rarely an immediate option.”

Several board members of The Samaritan Women are Catholic, among them John McKenna, a parishioner of Church of the Resurrection in Ellicott City.

“It still boggles the mind,” he said, “how some women get in a bad situation. If someone has control of your mind, emotionally, I don’t how you get out of that. The amazing thing is the good that comes out of evil.”

He was referring to the local response, which goes beyond the informational series offered by the Maryland Catholic Conference.

On May 11-13, The Samaritan Women held informational events for religious women and local Catholic parishioners.

A similar program was offered in April by the School Sisters of Notre Dame, who in March had announced an initiative to combat the trafficking of children in Haiti. In 2011, the School Sisters had been among eight orders of religious women who founded Asylee Women Enterprise in Baltimore.

On June 10, at 9 a.m., the Baltimore Guild of the Catholic Medical Association will sponsor a presentation at St. Louis in Clarksville, with insight from two staffers of Baltimore-based Araminta Freedom Initiative.

Its volunteers include Kristin DeVan, the campus minister at Maryvale. Her students created care packages for victims who lost all their possessions; under Marfo-Sarbeng and Marsico, that turned into a formal service group.

“We want to do more here, and educate our peers at other schools,” said Marfo-Sarbeng, a parishioner of Sacred Heart in Glyndon who last summer volunteered at two hospitals in Ghana, her father’s homeland. “People there are being denied basic health care, food and sanitation. Those are real Third World problems.”

Marsico, a parishioner of St. Joseph in Cockeysville, possesses a similar world view, derived from being born in Russia and adopted. On her own mission work one summer, she saw a subtle acknowledgement of the fact that the homeless are disproportionately affected by human trafficking.

“I worked with the younger kids at Camp St. Vincent,” she said, of an outreach to homeless children sponsored by the Society of St. Vincent de Paul. “No photos were to be taken of the children. Before I became aware of the issue, I would have never thought about that.”

Holbrook, the Mercy Medical Center forensic nurse, continues to educate adults and students from high schools such as Mercy High on the issue.

“Sex trafficking happens where there’s a market for it, so the brave person has to be educating truck drivers. Labor trafficking isn’t seen in waiters and waitresses, but in the help in the kitchen.”

She preaches socializing in groups.

Panda might apply herself as a tattoo artist, disguising the gang brands placed on people against their will.

Do the survivors have any advice for those seeking to help?

“Some people think we chose this, but it wasn’t like we planned it,” said Cherry, originally from North Carolina. “Don’t judge. I was on the street a couple of times. I could’ve left, but I chose to eat.”