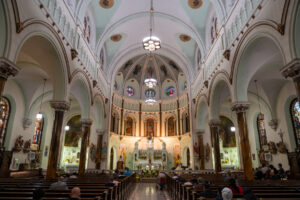 Knowing how desperately many members of their community needed food during the coronavirus pandemic, parishioners of St. Wenceslaus in East Baltimore made it a priority to keep their long-running food pantry going throughout the pandemic.

The pantry, open twice a week, typically serves about 20 families. That number skyrocketed to about 60 families at the outset of the pandemic, reaching 200 at its height.

“COVID was causing untold hardships on the people in this community,” remembered Josephite Father Xavier Edet, pastor. “We had high demand, and we’re very glad the pantry was there to help.”

Alicia Champlin, a longtime parishioner and director of the pantry, noted that the people served at the pantry are mostly non-parishioners, individuals who live in the neighborhoods surrounding St. Wenceslaus.

“Our program is for the whole community,” she said. “That’s the kind of church we are.”

St. Wenceslaus has been a welcoming presence in East Baltimore for 150 years.

Initially founded to serve Czech immigrants, many of whom worked in Baltimore’s can factories, the faith community evolved over the decades to become a multicultural parish. Today, St. Wenceslaus is a largely African-American faith community with a growing Hispanic population.

The parish is home to the Gift of Hope AIDS hospice operated by the Missionaries of Charity, whose founder, St. Teresa of Kolkata, twice visited St. Wenceslaus. The hospice is located in the convent that had previously been home to the School Sisters of Notre Dame who operated the now-closed parish school.

Father Edet, a Nigerian-born priest who also leads nearby St. Ann and St. Francis Xavier as part of a three-parish pastorate, noted that the Missionaries of Charity worship with the parish community and assist with faith formation and summer Bible camps for children.

St. Wenceslaus offers one Mass each Sunday that attracts approximately 60 to 70 people – more than 90 percent of whom travel to the parish from other parts of the city, according to Father Edet.

“People drive seven miles or more to be here because of their loyalty to the church,” the pastor said. “Their faith is rooted in word and sacrament, but also in action.”

Located in the shadow of The Johns Hopkins Hospital, St. Wenceslaus welcomes visitors who come to pray in the church while they or their loved ones are in Baltimore receiving treatment at the internationally-known medical center.

“We will pray for you right on the spot,” he said. “We have people ask for prayer all the time. We believe the church is the community, and we’re meant to be there for one another.”

Dorothy Stokes-Wallace, a 79-year-old parish leader who said she was the first African American baptized at St. Wenceslaus when she converted to Catholicism in 1952, said open-hearted hospitality has always been a hallmark of the parish.

“Everyone accepted me from day one,” Stokes-Wallace said.

Parishioners take pride in meticulously caring for their Roman-Byzantine church building (the third in the parish’s history), dedicated in 1915. Reflecting its Bohemian heritage, the church features a shrine to the Infant of Prague, a statue and relic of St. Wenceslaus, and a double statue of Ss. Cyril and Methodius, missionaries who brought Christianity to Eastern Europe.

The church also includes an image of Our Lady of Africa, patroness of the African-American community, and a statue of St. Martin de Porres, who ministered to African slaves in South America.

For most of its history, St. Wenceslaus was served by Redemptorist priests and brothers. Third Order Regular Franciscans took over leadership in 1999, with Conventual Franciscans and Josephites serving in more recent years.

Father Edet acknowledged that the parish faces significant challenges. The large, historic church building is expensive to maintain, and the neighborhoods surrounding the parish are subject to the problems of crime and violence that afflict many parts of the city. But St. Wenceslaus remains a beacon of hope.

“We exist by the mercy of God,” he said. “God owns the church and he takes care of his family. We are his instrument.”