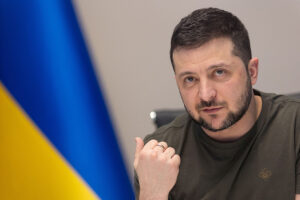 NEW YORK (CNS) — Before he started teaching the world how to stand up to a murderous bully, Volodymyr Zelenskyy was an actor and comedian. And before he became a president in real life, he played one on TV.

His vehicle for doing so was the series “Servant of the People,” which first aired in Ukraine over three seasons, beginning in 2015. While the show, with English subtitles, had previously come and gone on Netflix, the streaming platform recently made it available again — in light of current events and in response to popular demand.

How well, though, does Ukrainian political and social satire translate? Happily, the answer is, quite successfully.

Zelenskyy plays dedicated history teacher Vasiliy Petrovich Goloborodko. After one of his students secretly records an obscenity-laden but heartfelt rant against corruption to which Vasiliy gives vent, the video goes viral and launches the instructor on an unlikely path to his country’s highest office.

All of that is shown in flashbacks since the program basically opens with Vasiliy receiving the astounding news that he has won the election. This is preceded by a glimpse into the shadowy machinations of the group of oligarchs who have previously manipulated the nation’s ostensible democracy to their own ends and by an introduction to the working-class life of Vasiliy’s family.

The humor that follows plays on the greed and luxurious lifestyles of the more usual run of politician, Vasiliy’s fish-out-of-water response to his altered surroundings and the sudden transformation in the way he’s treated by colleagues and relatives. Stanislav Boklan deadpans delightfully as the unflappable prime minister whose task is to guide Vasily in his new role.

The show is not, however, suitable for young people. In addition to the vulgar language with which Vasily’s life-altering tirade is laden, the opening episode contains numerous other crude expressions. The amount of problematic vocabulary is dramatically reduced in the following two installments, but not entirely eliminated.

The quality of the comedy also varies, with the second episode registering as less entertaining than the two by which it’s bookended. Yet, as Vasily’s inauguration approaches, the sense of verve returns, and some appealing sentiment is added to the mix, partly through an imaginary conversation Vasily has with Abraham Lincoln.

While Ukraine now has more pressing problems to confront than dishonesty in high places, viewers can continue to garner laughs from this send-up of post-Soviet pilfering and duplicity. On a more serious note, the fact that the series propelled Zelenskyy onto the world stage is likely to make it a cultural artifact of enduring significance.