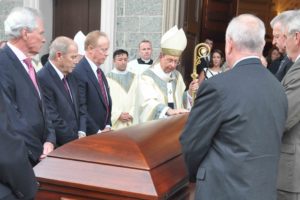 In a final sendoff marked with heartfelt displays of raw emotion, hundreds of people from across the Archdiocese of Baltimore packed the Basilica of the National Shrine of the Assumption of the Blessed Virgin Mary Sept. 10 to say goodbye to Monsignor Arthur F. Valenzano.

The basilica’s 24th rector, whose previous assignments included appointments as pastor of St. John in Westminster and St. William of York in Baltimore, died Sept. 5 at age 66 after a nearly decade-long battle with acute myeloid leukemia.

As they had the day before the funeral, a stream of mourners filed past Monsignor Valenzano’s open casket prior to the start of a two-hour funeral Mass as white-gloved members of the Knights of Columbus and the Knights of the Holy Sepulcher of Jerusalem took turns standing at attention.

Some reached out to touch the priest’s rosary-clad hands and others dabbed tears at the sight of the priest dressed in his vestments.

Father Brian Nolan, director of campus ministry at Mount St. Mary’s University in Emmitsburg and a former associate pastor under Monsignor Valenzano at St. John, knelt beside his friend as he paid his respects, gently resting a hand near the priest’s body.

“He looked for the good in every person,” Monsignor Tewes said, noting that his friend had a beautiful smile that captured people. “He never spoke negatively of people. He was comfortable with people of all ages and made them feel comfortable also.”

Monsignor Tewes said his friend showed great generosity from his earliest years. He recalled that when Monsignor Valenzano was a teen at St. Charles Minor Seminary in Catonsville, some of his classmates who worked with him for the Little Sisters of the Poor had saved up money for a trip to Florida. When they invited him to go with them, he couldn’t.

“They said, ‘What did you do with your money from the Little Sisters?’“ Monsignor Tewes recounted. “And he said, ‘I gave it back to them.’”

When Monsignor Valenzano first fell ill during a stay in Rome, he spent 40 days in Gemelli Hospital. Monsignor Tewes remembered that a nurse once asked Monsignor Valenzano who he was. When he responded, “an ordinary parish priest,” she dismissed the claim, noting that Cardinal James Stafford, a former auxiliary bishop of Baltimore, had visited him every week since he arrived at the hospital.

Monsignor Tewes said his friend relished all his assignments in his 40 years of priesthood, which included serving as associate pastor of St. Ambrose in Park Heights and St. Mary of the Assumption in Govans, and administrator of the Monsignor O’Dwyer Retreat House.

Monsignor Tewes said his beloved friend died as the archbishop and several others stood at his bedside praying the eighth Hail Mary of the Mystery of the Resurrection in the rosary.

Overcome with emotion at the conclusion of his homily, Monsignor Tewes bent down and embraced his friend’s pall-draped casket as tears streamed down his face.

Archbishop Lori, who had often celebrated Mass beside Monsignor Valenzano as he was in hospice care at the basilica, said Monsignor Valenzano offered his suffering for evangelization, religious vocations and the healing of the city. He touched the lives of thousands of people personally, the archbishop said.

On a normal weekend, Archbishop Lori said, the basilica’s Facebook page might have 300 or 400 hits. Since Monsignor Valenzano’s death, he said, that number has surpassed 30,000 – a sign of how beloved he was.

“I don’t think we will ever say the ‘Our Father’ the same again,” Archbishop Lori said. “I’d invite you to pull out three little words, totally out of context: ‘Art in heaven.’”

The archbishop read from a letter sent by Cardinal Edwin F. O’Brien, grand master of the Equestrian Order of the Holy Sepulcher of Jerusalem and Archbishop Lori’s predecessor in Baltimore.

“Arthur was the prototypical man without guile, totally sincere and honest, ever available to his people and to his archbishop,” Cardinal O’Brien wrote.

Although Monsignor Valenzano was never on the faculty of a seminary, Cardinal O’Brien said, he “ever remained a priest-formator for the clergy and seminarians of Baltimore and only the Lord knows the effect that his gentle, but principled guidance has had on so many of our clergy, invariable behind the scenes.”

Archbishop Lori drew laughter and applause when he made reference to Monsignor Valenzano’s love for the Baltimore Orioles and Cardinal O’Brien’s love for the Yankees.

“Let it be known that since Art went home to God,” Archbishop Lori said, “the Orioles beat the Yankees twice.”’

Kathy Wandishin, who was Monsignor Valenzano’s assistant at the basilica for several years, devoted herself to caring for the priest as his illness progressed. She had lost a son to leukemia and knew what to expect.

“I felt it was a blessing for me to be able to walk someone else home to God,” she told the Catholic Review.

Wandishin said Monsignor Valenzano saw everyone as a child of God. He carried a wad of dollars during his walks around the basilica, she said, giving them out to homeless people on the street.

“He looked past their issues and just saw the good,” she said. “He saw people as Jesus saw them.”

Jordan Tippett, director of religious education at St. John in Westminster, said a busload of parishioners traveled to the basilica for their former pastor’s funeral. He had overseen construction of a new church at the parish, converted the previous church into a reception hall, opened a perpetual adoration chapel and was known for always being present to those in need.

“I think his charism was just being in the moment with people,” she said. “When you had time with him, he was completely with you and he made you feel like there was no one else in the world.”

Tippett said she and her family would not have converted to Catholicism had it not been for Monsignor Valenzano. Tippett’s mother, Sarah Torbeck, visited St. John and saw Monsignor Valenzano praying at the back of the church several years ago. She was inspired by his prayerful example and joined the Catholic Church, bringing her entire family with her.

As pallbearers slowly led Monsignor Valenzano’s wooden casket down the basilica’s center aisle at the end of the funeral Mass, applause rippled through the old cathedral.

“He meant so much to all of us,” Tippett said. “He loved everyone.”

Monsignor Valenzano, basilica rector who touched the lives of thousands, succumbs to cancer