When a doctor told Treasa and me two years ago that our unborn baby likely wouldn’t live for more than a day or two after his birth, one of the first people I called was Monsignor Arthur Valenzano. I had written a cover story for the Catholic Review in 2007 about how the much-loved pastor, then stationed at St. John in Westminster, had successfully undergone a bone-marrow transplant in his fight with acute myeloid leukemia.

Throughout his ordeal, which included punishing rounds of chemotherapy and radiation treatments, the priest had maintained a remarkably positive outlook – always diverting attention from himself as he encouraged others.

My wife suggested that we look to Monsignor Valenzano for inspiration. If Treasa and I could emulate just a small portion of our friend’s boundless courage, humility and faith, we knew our cross would be more bearable.

I’ll never forget how Monsignor Valenzano graciously ushered us into his small office at the Basilica of the National Shrine of the Assumption of the Blessed Virgin Mary in Baltimore, where he was rector.

Greeting us with a warm smile, his eyes seemed filled with the compassion of someone who instinctively knew how to carry the anguish of others.

At that time, Monsignor Valenzano was still feeling well, but his cancer was back and within a few months he would have to go through more grueling treatments and yet another bone-marrow transplant.

During our meeting, the priest read a passage from Jeremiah, reminding us that God knew us before he created us in our mother’s womb. He told us that out of all the people in the world who could have been the parents of our child, God picked us.

Monsignor Valenzano then closed his eyes and prayed with us.

I don’t remember what words he uttered, but I do remember feeling the presence of the Holy Spirit as the cleric’s soft, gentle voice washed over us.

Treasa and I left our meeting feeling more ready to face whatever would come our way.

The very next day, Monsignor Valenzano called me on my cell phone. It was a quick five-minute call. The Western Maryland native just wanted to check and see how Treasa and I were holding up. He would do whatever he could to support us, he promised.

True to his word, Monsignor Valenzano was with us throughout our difficult pregnancy.

He blessed our baby – George Paul Matysek III – in Treasa’s womb using a new rite prepared by the U.S. Conference of Catholic Bishops. He encouraged us when doctors held out hope they could save Georgie’s life by performing heart surgery after his birth. And, when we didn’t make it that far, the priest arrived at Johns Hopkins to pray with us on the day our son’s heart stopped beating six weeks before his due date. When Georgie was born two days later, Monsignor Valenzano returned to the hospital to be with us yet again.

As I held my son’s motionless body in my arms and family members gathered on the Feast of All Souls, Monsignor Valenzano prayed with us and offered a blessing. Although it was a sad moment, there was also a sense of joy in being united in faith.

The man who had been a concelebrant at our wedding later buried our little one and offered a memorial Mass at the basilica. He repeatedly assured us that Georgie was our advocate in heaven.

Not long after we lost Georgie, God blessed us with another baby.

Monsignor Valenzano was with us yet again – sharing in our excitement and blessing our daughter in the womb. Even though his health was rapidly declining and he was no longer doing baptisms, Monsignor Valenzano made an exception for us and baptized our little girl at the basilica in November 2014. His voice was weak and sometimes trailed off that day, but his holiness was as radiant as ever.

When Monsignor Valenzano touched our daughter’s lips as part of the baptism rite, the infant instinctively tried to nibble his finger.

“God love you,” the priest said with a laugh as he smiled at the baby.

Monsignor Valenzano’s presence at the baptism was a tremendously generous and selfless gift – one that our family will forever cherish. 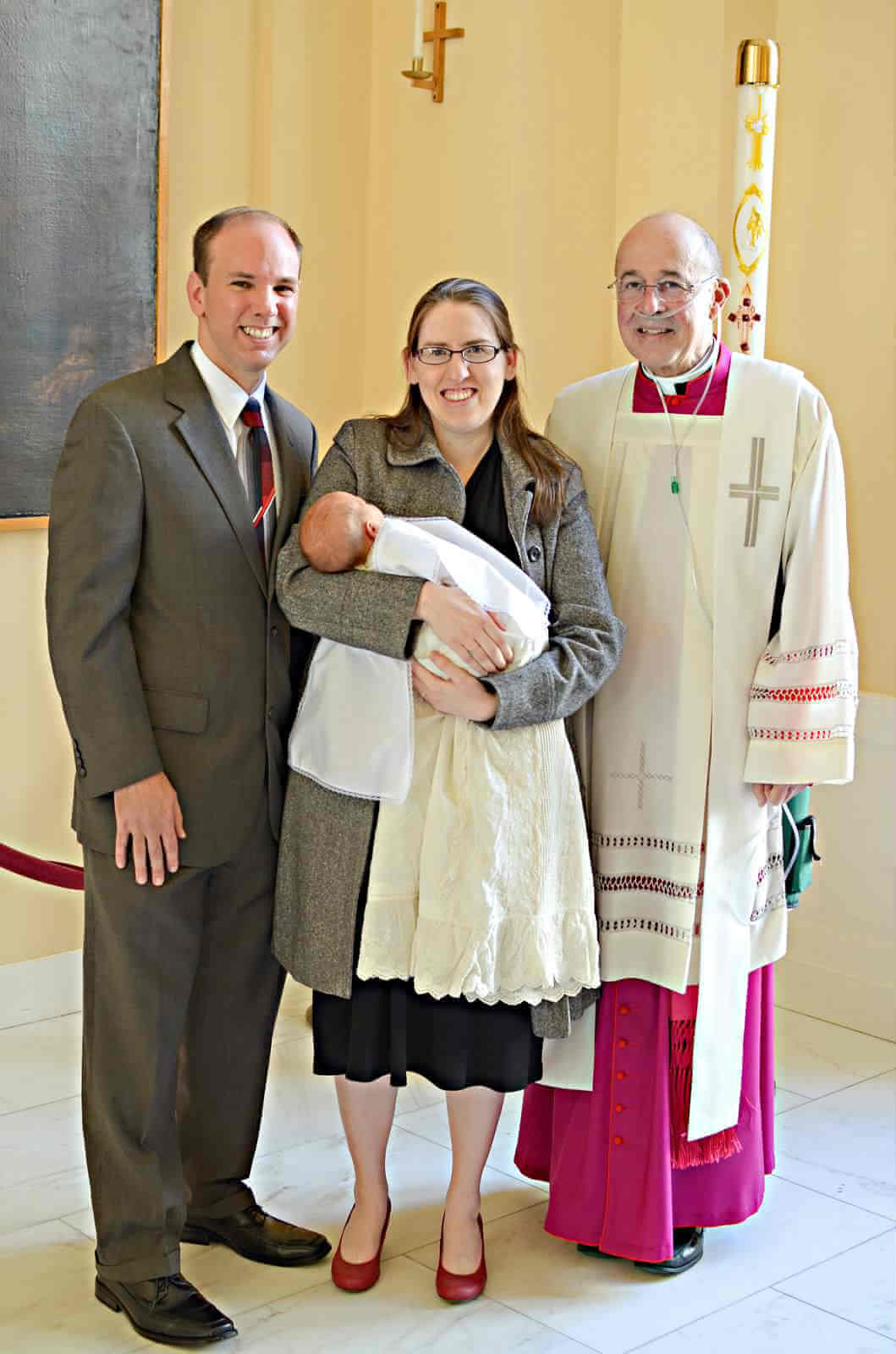 The last time I spoke with Monsignor Valenzano was at the special May celebration marking the 40th anniversary of his ordination to the priesthood. At the end of the day, I shook his hand and congratulated him on his milestone.

I was more than happy to accommodate Monsignor Valenzano’s request.

Now, as the good and faithful servant has been welcomed into his Father’s house Sept. 5, I know that Georgie is embracing him – as are the countless others whose lives had been touched on Earth by the actions of this humble priest.

Thank you, Father Art, for showing the world what it means to be a true follower of Christ. Throughout your priesthood, you often exclaimed “Praise Jesus!” Today, all of the Archdiocese of Baltimore and beyond praises Jesus for the gift of your priesthood. May we learn from your example and make this world better for others.

My sister-in-law shares her memories of Monsignor Valenzano here.

Monsignor Valenzano, basilica rector who touched the lives of thousands, succumbs to cancer

Georgie’s Story: Choosing life when the prognosis is death