Included in this month’s Names and Numbers are some major milestones and anniversaries. 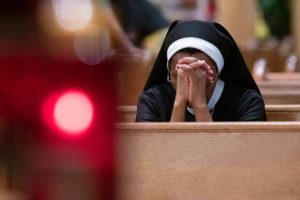 The amount of grants to assist aging Catholic sisters, brothers and priests in religious orders from SOAR! – Support Our Aging Religious – including support for two communities with a presence in the Archdiocese of Baltimore, the Mission Helpers of the Sacred Heart and the Oblate Sisters of Providence. Their grants will go toward the purchase an accessible van so that sisters, many of whom are in wheelchairs or use walkers, can safely travel to appointments and outings.

All told, 74 religious congregations were on the receiving end of the highest level of annual grants ever given by SOAR.

As of July 22, the total donated by parishioners in the archdiocese to the Mill Closure Fund, which will provide assistance to families affected by the closing of the Luke Paper Mill. The paper mill in Luke, in southwestern Allegany County, recently closed after 131 years of operation, resulting in the loss of 675 jobs.

The Allegany County Department of Social Services will coordinate assistance provided through the fund. Call 1-301-784-7000 and request a member of the Resource Management Team.

Donations to the fund, which was established by Divine Mercy Parish in western Allegany and eastern Garrett counties, can be made by visiting divinemercymd.org and clicking on “Stewardship.” 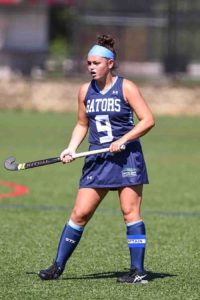 The year Megan Morales, who was nominated for the NCAA Woman of the Year Award by Notre Dame of Maryland University, graduated from The Catholic High School of Baltimore. Morales earned Colonial States Athletics Conference awards for her accomplishments in field hockey and lacrosse, maintained a 3.8 grade point average, and recently graduated with a degree in Marketing Communications.

Her sister, Sara, graduated from Catholic High in May and will follow her to Notre Dame of Maryland University. Both attended St. Michael the Archangel School in Overlea.

The combined years of ministry among 26 jubilarians honored by the Sisters of St. Francis of Philadelphia in June, including 15 who served in the archdiocese, several with Baltimore roots.

Shown in picture at top of page, from left, in the front row, are Sister Sharon Robinson (70 years), who served as assistant principal of St. Elizabeth School; Sister Eleanor Horneman (70), who taught at Towson Catholic High School and served as the western regional consultant for the archdiocese of Baltimore when she was based at St. Joseph Parish in Midland; Sister Corda Marie Bergbauer (70), who taught at both St. Stephen School in Bradshaw and at The Catholic High School of Baltimore; Sister Margaret Mary Lewis (70), who served at St. Joseph Hospital in Towson, Shrine of the Little Flower School, and Catholic High; and Sister Agnes Borkowski (70), who served at Our Lady of Mt. Carmel High School in Essex and St. Elizabeth School, and continues to volunteer at University of Maryland St. Joseph Medical Center.

In the back row, from left, are Sister Michele Therese Kriczky (50), who served at St. Elizabeth of Hungary Parish and Stella Maris, and has been ministering at the Cardinal Shehan Center for Aging in Towson since 1990; Sister Barbara Harold (50), who taught previously at St. Clement Mary Hofbauer School in Rosedale;

Sister Elizabeth Howe (50), who ministered previously at what is now University of Maryland St. Joseph Medical Center in Towson; and Sister Helen Jacobson, (50) who taught at Immaculate Conception School in Towson and Catholic High. 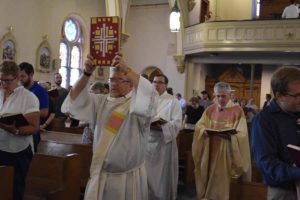 Years since the laying of the cornerstone of Our Lady of Good Counsel in Locust Point, an anniversary the church acknowledged June 23. In addition to being the exact date in 1889 when the cornerstone was laid, the Feast of Corpus Christi served as a re-opening of the church, which had been closed since mid-March for renovations that included a new floor, and a farewell to Father Patrick Carrion, who had been pastor of the Catholic Community of South Baltimore before being assigned to St. Bernadette in Severn. He is shown in the opening procession of 11 a.m. Mass that day following, from left, Deacons Kevin Reid and Mark Cohagan. 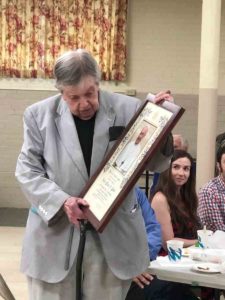 Years as a priest for Monsignor William F. Burke, pastor of St. Francis of Assisi in Mayfield, which acknowledged that milestone with a June 9 Mass and reception, which included an apostolic blessing from Pope Francis. In addition to being pastor there since the 1970s, Monsignor Burke is the longtime archdiocesan director of the Catholic Campaign for Human Development. 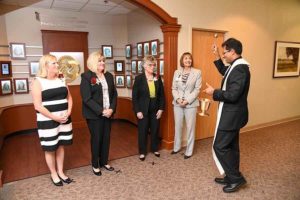 Health care professionals at University of Maryland St. Joseph Medical Center in Towson inducted into the hospital’s Class of 2019 Healing Hands Guild & Profiles of Compassion Society. The honor is bestowed annually on those who demonstrate “an unflagging and wholehearted commitment to the hospital’s mission to provide loving service and compassionate care.” 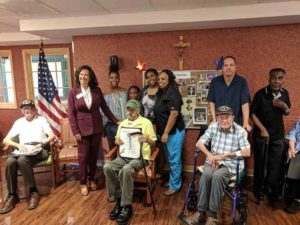 Veterans of World War II honored at Stella Maris Senior Day Center in Timonium July 12. The observance included the help of the Hereford Community Theater Group, which sang the National Anthem, and Dr. Michelle Guyton, a member of the Maryland House of Delegates. Sponsored by the Sisters of Mercy, Stella Maris offers programs for the sick, the elderly and the dying. 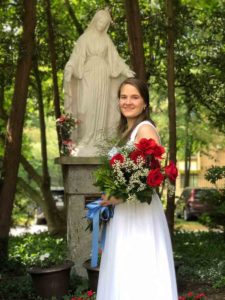 Weighted grade point average for Theresa Balick, valedictorian at Mount de Sales Academy in Catonsville. A parishioner of St. Louis, Clarksville, where she remains active in the youth choir, Balick is headed to Franciscan University of Steubenville, Ohio. At Mount de Sales, she was a member of the National Honor Society, as well as national honor societies for History, Math, English, Science and French.