TOWSON – Students and parents of Immaculate Heart of Mary School were greeted during their Nov. 20 dismissal to a different kind of rooftop visitor than the one usually talked about this time of year.

Father Jeffrey S. Dauses, pastor of Immaculate Heart of Mary in Baynesville, made good on his idea as the “Fool on the School” to raise $2,500 for a new, life-size statue of the Blessed Virgin Mary and garden refurbishment for the school entrance, all to be dedicated to a beloved former principal, Wilma Short.

Last spring, the IHM school board began discussions on the project, which was brought to a standstill by the COVID-19 pandemic.

Shortly before 3 p.m. Nov. 20, Father Dauses climbed a ladder onto a one-story-high roof. Within the hour, the fundraising goal was easily met, and as of the morning of Nov. 21, Father Dauses reported that the effort had raised $12,737.

The pastor, who arrived at the parish July 1 following the sudden passing of former pastor Father Michael W. Carrion last fall, pledged to stay on the roof into the dawn hours of Saturday.

“This is the first time I’ve ever climbed up on a roof,” said Father Dauses, who admitted he is “petrified of heights.” His uneasiness was apparent, as he kept his distance from the roof’s edge when he lowered by rope – or most of the time, tossed – a blue bucket into which children and parents could place their donations.

After a dozen or so drops, the plastic bucket broke from hitting the concrete. A sturdier and more flexible bucket from the school’s housekeeping staff was quickly placed into service.

Students dismissed from school waved, laughed, cheered and raced to drop off whatever change they had or what their parents gave them before exiting the parking lot. Father Dauses called the kids’ contribution a “widow’s pence that adds up.”

Adults and parents, some of whom represented multi-generational families at the school and parish, placed envelopes in the bucket with more significant gifts, of which one in particular pushed school over its goal before dinner.
Not long into the roof fundraiser, an envelope marked from the Class of 1979 was dropped in the bucket with the instructions not to open until 11:20 p.m. Nov. 20. That gift alone was $400.

“The excitement is about Father (Dauses) being on the roof,” said Sister Susan Louise Eder, principal of the school and an Oblate Sister of Saint Francis de Sales. “The statue of the Blessed Mother in front of the school is showing some wear and we also want something a little bit bigger and nicer, as a school dedicated to the Blessed Mother.”

Sister Susan Louise added that the project would cost approximately $5,000.

Each time a donation was made, no matter how small, Father Dauses rang a bell in celebration. When the $500 mark was achieved, he performed the “Hokey Pokey” celebration dance with students. At $1,500 he was supposed to be coated with Silly String. At $2,000 sing a song. And at $2,500 get a pie in the face.

Since the goal was achieved so quickly, Father Dauses, being the good sport that he is, climbed down from the roof for a time so students could partake in the fun.

While IHM seventh-grader Dylan Mellendick gave Father Dauses a pie in the face once the fundraising goal was achieved, Avia Love stole the show when the kindergarten student was offered a second opportunity to do the same.

Not understanding the concept, Avia gave herself a pie in the face sending Father Daucies to the ground laughing along with others in attendance.

Marianne Kozlowski, assistant principal of IHM School was impressed with Father Dausess, in street clothes and available to IHM students. She said he’s done a wonderful job connecting with them in so many ways since arriving as their pastor.

A steady flow of donors, students and their families continued stopping by to make a donation as the skies darkened.

“I’m going to be up here all night,” Father Dauses told everyone from on high. “I have everything I need … a blanket, chair, phone, SpaghettiOs and a spoon.”

“My mother always said the Lord looked out for idiots and Irishmen,” Father Dauses said with a smile as he talked with local media. “I’m not an Irishman. I fall into the idiot category, so he looks out for me once in a while.

“I think they (the students) will look back and have a great happy memory. I want to thank the parents and students for their great support.”

Immaculate Heart of Mary, established nearly 70 years ago, has 290 students, according to Sister Susan Louise. 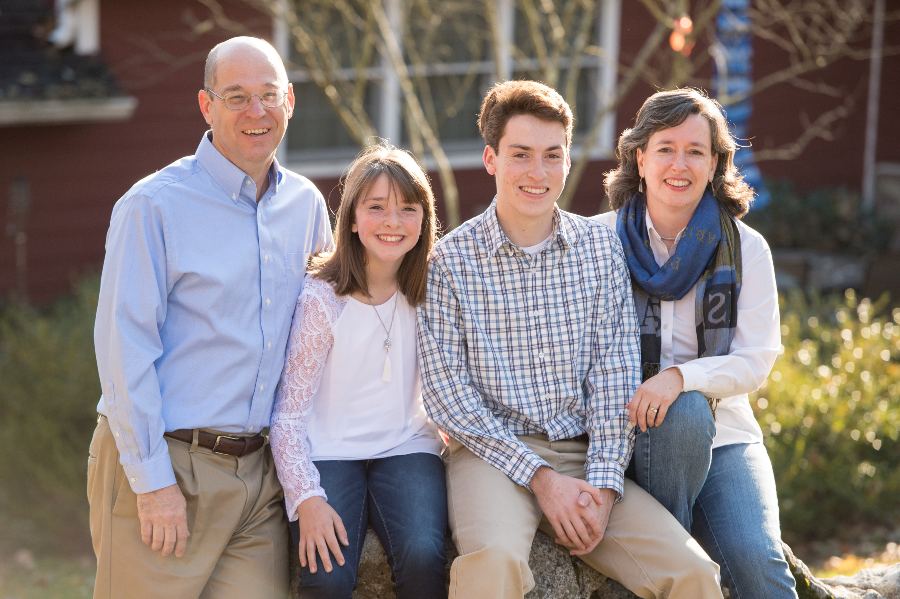 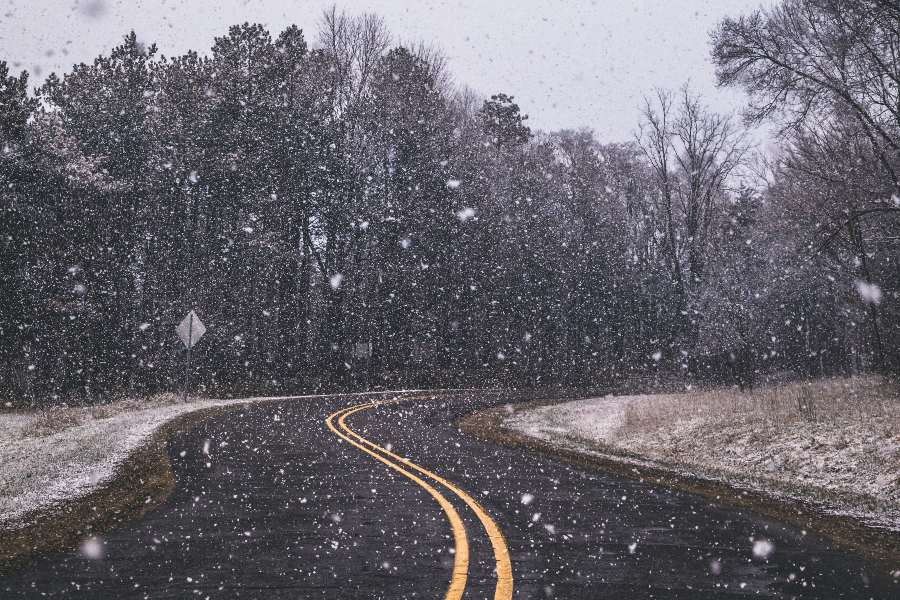 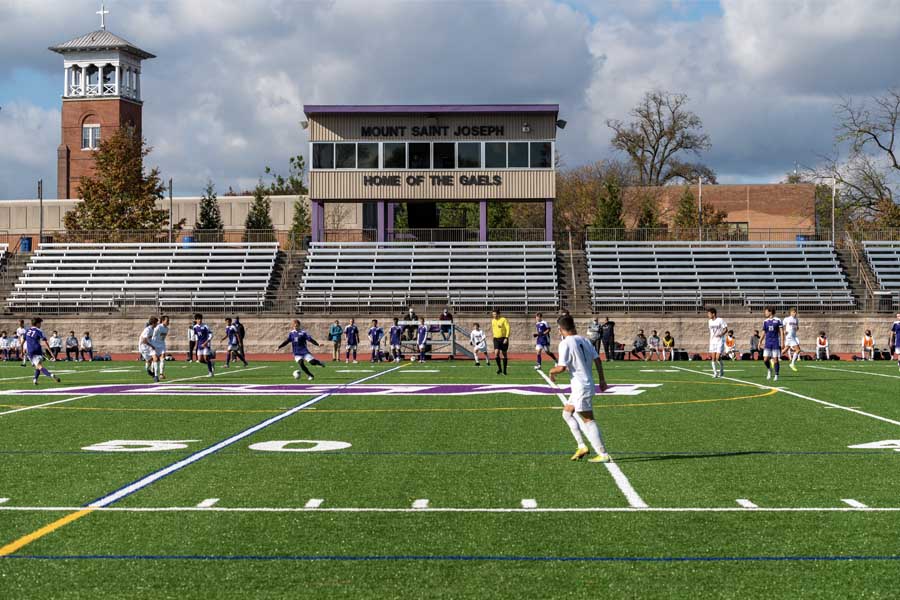 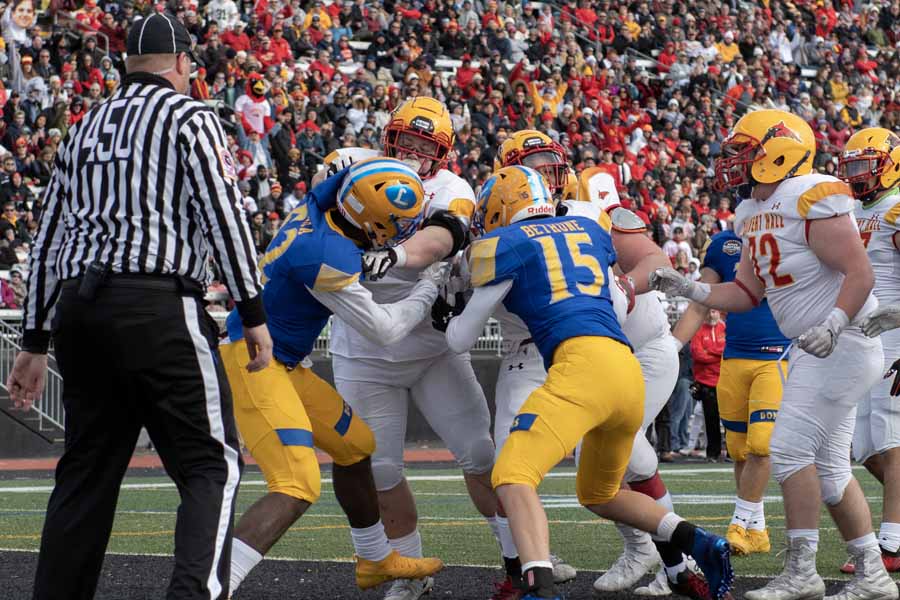