This installment of Names & Numbers, timed for Catholic Schools Week, highlights notable scholastic achievements in the Archdiocese of Baltimore.

Grant awarded to Our Lady of Mount Carmel School in Essex by Gov. Larry Hogan through the National Revitalization Program’s Community Legacy program. The school will use the funds toward the construction of a multi-purpose athletic field, a project which had already received $125,000 in pledges.

Donation to Bishop Walsh School from the Knights of Columbus Pope John XXIII Council #4550. The council opened at St. Ambrose in Cresaptown in 1968, but closed as the church prepares to do the same. According to Ray Kiddy, principal of the school in Cumberland, it was one of the largest gifts in its history. The monies will be used for tuition assistance. 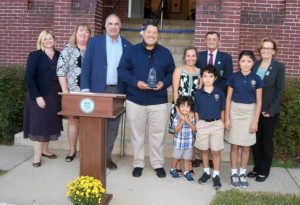 The year St. Thomas More Academy opened in Frederick County. The pre-K-3-8 school marked its 20th anniversary with a dedication and reception Sept. 20 on its Middletown campus. Former teachers, alumni, community partners, board members and current families were in attendance. Wayne Matthews, who runs the school’s bingo fundraising program, received a “Making a Difference” Lifetime Volunteer Appreciation award. A parishioner of St. John the Evangelist, Frederick, Matthews is pictured at right holding his award. To his left are his wife, Ana, and their three children, Ian, fourth-grader Wayne and sixth-grader Mia.

The year Ken Kazmarek graduated from Mount St. Joseph High School. Kazmarek recently retired as athletic director at Broadneck High School, where the basketball court was named for him Jan. 3, in recognition of his coaching that sport to 296 victores over 19 seasons. After he retired from coaching, Kazmarek became an official in the Baltimore Catholic League.

Raised for the science program at Trinity School in Ellicott City Nov. 8, when meteorologist Justin Berk made presentations to students in grades K-8 to discuss weather patterns and the science and math behind them. 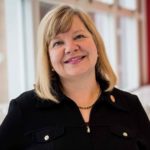 School leaders from around the world selected for this year’s Klingenstein Heads of Schools Program at Columbia University’s Teachers College, among them Mary Beth Lennon, the president of Mercy High School. Lennon is in her sixth year as president of her scholastic alma mater. The Klingenstein fellowship brings together heads of independent schools to consider educational philosophy, leadership, and strategic innovation.

The win streak for the Institute of Notre Dame over Mercy High School in “The Game.” Their basketball showcase will be played for the 54th time Jan. 31, at Towson’s SECU Arena. The Penguins rolled to a 69-27 victory last year, but this season they’re struggling to compete in the Interscholastic Athletic Association of Maryland A Conference, while the Magic are much improved in the B Conference. They got coach Mary Ella Marion the 400th win of her career Dec. 22.