The latest installment of Names & Numbers includes jubilees for religious men and women, national handwriting honors for a pair of elementary school students, and a major scholarship for a medical research standout.

Elementary school age students who entered the 2019 Zaner-Bloser National Handwriting Contest, among them Joseph Robuck, the grand national champion among eighth-graders and a recent graduate of School of the Incarnation in Gambrills. Joseph will attend Archbishop Spalding High School in Severn with Presidential, music and Knott scholarships. 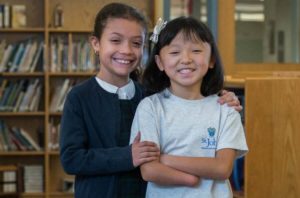 Sara Hinesley, a rising fourth-grader at St. John Regional Catholic School in Frederick, received Zaner-Bloser’s Nicholas Maxim Award, which honors students with special needs who have demonstrated excellence in handwriting. Hinesley, who was born without hands, was featured on the February 2018 cover of the Catholic Review. 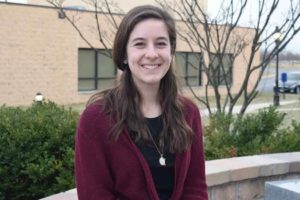 College students in the U.S. awarded a Barry M. Goldwater Scholarship for the 2019-20 school year, among them Veronica Balick, a rising senior at Mount St. Mary’s University in Emmitsburg. Named in honor of the late U.S. senator from Arizona, the $7,500 scholarship goes to elite students pursuing research careers in natural science, mathematics and engineering. A double major in biochemistry and biology, Balick is a parishioner of St. Louis, Clarksville, and 2016 graduate of Mount de Sales Academy in Catonsville. In March 2018, she was featured in the Archdiocese of Baltimore’s Faces of Faith series.

Years as Sinsinawa Dominicans for Sister Mary Ann Miller and Sister Patricia Bauch, who are celebrating those jubilees in June. Both taught at the former St. Rose of Lima School in Brooklyn, the former from 1963 to ’66, the latter, 1972-74. Now retired in her hometown of Omaha, Neb., Sister Mary Ann, whose religious name was Sister Mary Mancini, also served as a teacher and/or principal in Illinois, Iowa and Nebraska.

Sister Patricia, whose religious name was Sister Romanus, also served as a principal and/or teacher in Illinois, Wisconsin and South Dakota. In the Archdiocese of Washington, she ministered as the Elizabeth Ann Seton chair in Catholic education while serving as assistant professor and research fellow at The Catholic University of America, 1983-1990. She also taught at the University of Alabama and Seattle University. She lives at the motherhouse in Sinsinawa, Wis.

Years in the priesthood for Father Michael J. Ruane, whose jubilee was acknowledged with a Mass of thanksgiving May 17 at St. Michael, Poplar Springs, in Mount Airy (see photo at top of page). A Baltimore native, Father Ruane became pastor there in December 1988, after serving St. Agnes, Catonsville, and Our Lady of Hope, Dundalk. The Mass included several fellow priests, and an honor guard from the parish’s Knights of Columbus Council, #10525. It was followed by a sit-down reception that included more than 200 parishioners past and present, a blessing from Pope Francis and a congratulatory proclamation from Gov. Larry Hogan. 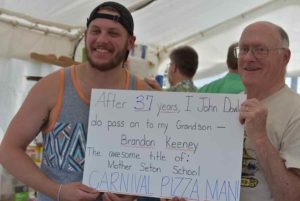 Years that John Dowling was known as “The Pizza Man” to the Mother Seton School in Emmitsburg community. After nearly four decades of providing sustenance at the school carnival, a major fundraiser, he passed his apron down to a grandson, Brandon Keeney, after working the ovens one last time in May. Dowling, a parishioner of Our Lady of Mount Carmel, Thurmont, received the school’s Seton Values Award last October. 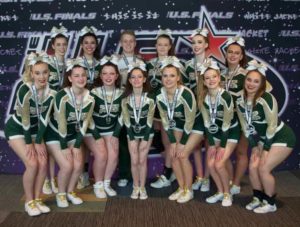 Members of the Competition Cheer team at St. John’s Catholic Prep in Buckeystown, which took first place among novice high school teams at the U.S. Finals in Virginia Beach, Va., in May. Mary Coajou and Michelle Ennis coached a team that consisted of three seniors, three juniors, four sophomores and three freshman. 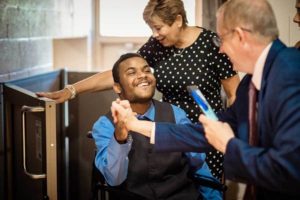 Graduates celebrated by St. Elizabeth School in Baltimore June 11, among them Leon Billups, who received the title of “Best Advocate” in recognition of his efforts to help raise awareness and funding for the school’s Disability-Accessible Building Project. The school, which was founded by the Franciscan Sisters in 1961, serves children and young adults ages 6-21 who are challenged with intellectual, physical, and/or emotional disabilities.

Years of charity dinners for Nothing’s Wasted, an outreach that was inspired by the late Jesuit Father Frank McGauley and undertaken by the parishioners of St. Francis Xavier, Hunt Valley, and St. Joseph, Cockeysville, through the Catholic Men’s Fellowship. More than 100 attended the March 30 fundraiser at Loyola Blakefield, helping to provide clean, safe water in villages in India, near when Father McGauley served during his 35 years there. The outreach has built 94 wells in 87 villages. 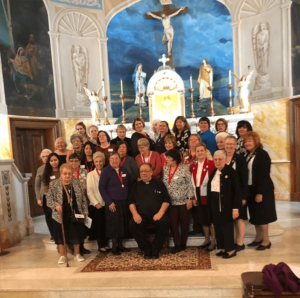 Circle of the Daughters of Isabella in Maryland, with the establishment of Annunciation Circle #1448 at St. Leo the Great, Little Italy. The organization, which welcomes Catholic women 16 and older, was founded in 1897 as an auxiliary to the Knights of Columbus. Asked what distinguishes them from ladies auxiliaries of the Knights, Carmella Walsh, regent, said that the Daughters “work with the Knights on projects and are closely aligned, yet separate and distinct.” She was one of the officers installed April 6 for the circle, which has 30 charter members.