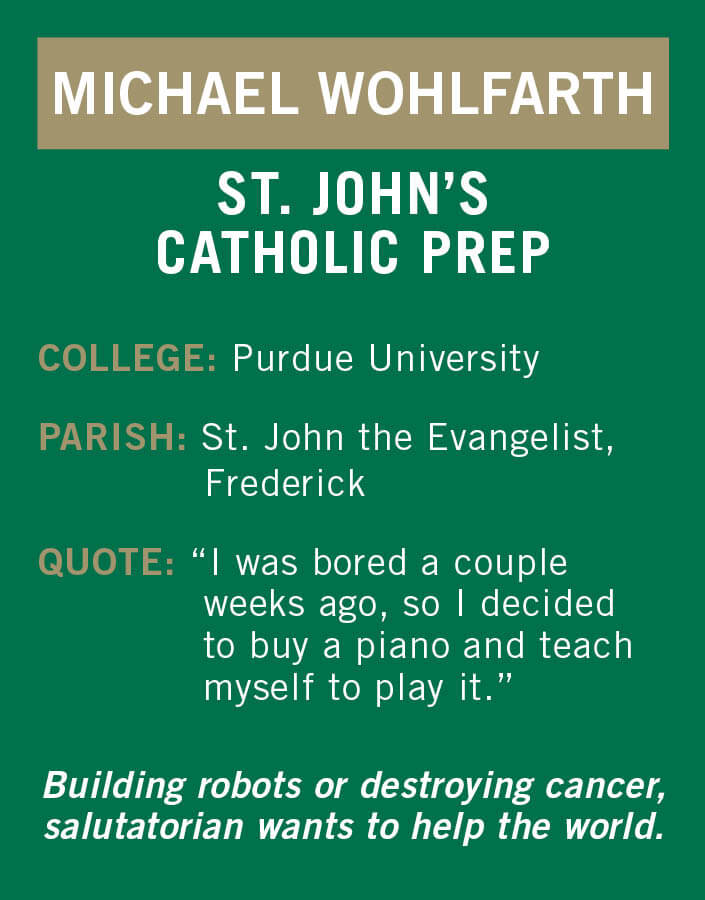 BUCKEYSTOWN – “My favorite classes,” said Michael Wohlfarth, salutatorian at St. John’s Catholic Prep, “were the ones that gave me a taste of what I might want to do with my life.”

His preferences – calculus and biology – are among those most likely to inspire that classic question: “When are we going to use this in real life?”

Wohlfarth has already applied the apex of his academic pyramid to “real life” – building and flying quad helicopters or programming a robot arm to take direction from a PlayStation controller, for example. He’ll build on those  experiences as he tackles biomedical engineering at Purdue University in Indiana, and, later, the world’s problems.

“It’s a pretty great place, but there are some flaws and things we need to work on,” he said. “I don’t want to be in the hospital removing a tumor that has developed; I want to be the guy that prevented the tumor from developing.”

Thomas Powell, president of St. John’s and president emeritus of Mount St. Mary’s University in Emmitsburg, doesn’t doubt that it could happen, saying, “The kid is like Superman. He is the product of wonderful parenting, and I would be shocked if we don’t see him in a leadership position.”

An Eagle Scout and vice president of St. John’s chapter of the National Honor Society, Wohlfarth said, “The most important thing to me in my life is helping others.”

A parishioner of St. John the Evangelist in Frederick and peer minister at the Prep, he has nourished himself on “all the religion classes I’ve taken.”

“Peer ministry for me is helping younger kids develop in their faith, as well as about service,” he said. “I would much rather have had the faith aspect than not – it has helped me in my education and formed me in who I am.”

Wohlfarth participated in cross country, indoor and outdoor track, lacrosse and soccer. He played drums in the liturgy band and occasionally at St. Peter the Apostle Parish in Libertytown.

After-school activities helped him appreciate the “sense of community” at St. John’s, which he will miss the most.

“We’re all here that much longer than the school day, and we’re all bonding that much more,” Wohlfarth said.