By the time Father James D. Proffitt finally put his feet up Nov. 10, he’d presided at a funeral and a wedding, baptized three babies, heard confessions for an hour, presided at the Saturday vigil Mass and administered the anointing of the sick.

“It’s not like I do that every Saturday,” said Father Proffitt, pastor of 7,500 families at St. John the Evangelist Parish in Severna Park.

Father Michael Rubeling, associate pastor, and Deacon Nick Pitocco share duties on a normal Saturday, but neither was available on this one.

A morning funeral for Jackie Chang, a longtime parishioner, was added to a calendar that already included the noon baptisms and the 2 p.m. wedding of Brian Hoofer and Kimberly Truman.

After the bride and groom processed down the aisle, Father Proffitt  headed for the confessional, where it usually takes two priests 30 minutes to an hour on a typical Saturday.

“There was a line of them,” said Father Proffitt, who didn’t have time to hear every confession before his preparation for the vigil Mass.

His day still wasn’t done. A parishioner called requesting the anointing of the sick, so he jumped in his red Toyota RAV4 to go pray with the family.

The opportunity to spend time with parishioners during milestone moments is cherished.

The Brutram and Fernandes baptisms enabled Father Proffitt to spend time with couples at whose weddings he officiated. As she received the anointing of the sick, Julia O’Shaughnessy was able to speak with him.

“That was really a blessing,” Father Proffitt said, noting that often the sacrament is given when a person is near death. “There’s grace in the sacraments. There’s a connection in every one of those events.” 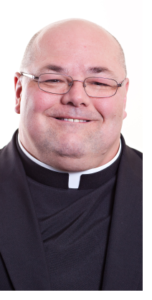 On days such as Nov. 10, Father Proffitt said, “Having a good lay staff and volunteers is critical.”

The Arimetheans, a lay group at the parish, handled logistics for the funeral, where the funeral choir sang. Mentor parents in the Belonging group helped young parents prepare for baptism. The newlyweds had their own mentor couple accompanying their vocation. Music director JoAnne Ibex helped coordinate all the liturgies.

At day’s end, Father Proffitt finally got to eat, a Chick-Fil-A sandwich followed by a pint of Ben and Jerry’s ice cream.

“It was a banner weekend,” Father Proffitt said with a laugh.