Archbishop William E. Lori of Baltimore said he expects the U.S. bishops to set aside most of their regular agenda for the annual fall meeting here Nov. 12-14.

Instead, he thinks the bishops will open their meeting with extended prayer.

“I think it’s the most foundational step. We have to take a day of reparation and penance,” the archbishop told the Catholic Review a month before the meeting.

He said the bishops “will focus mostly on taking a few practical steps, which serve as a beginning of a longer process of restoring trust.”

Those would include putting into place a national third-party reporting system for allegations against bishops and development of a code of conduct for bishops, he said.

The goal of those two steps is to ensure that any allegation against bishops would be treated in the same way as an allegation against a priest or an employee, putting bishops and other church employees on a “level playing field.”

Archbishop Lori said the bishops want to move ahead with a thorough investigation “on this side of the Atlantic” of the case of Archbishop Theodore McCarrick, former archbishop of Washington, who resigned from the College of Cardinals in July amid allegations of sexual misconduct and abuse.

Archbishop Lori said, “We’re very hopeful that the investigation at the Vatican will also proceed in a timely and thorough fashion.”

The Vatican press office Oct. 6 published a statement saying Pope Francis has decided that as the Congregation for the Doctrine of the Faith continues its investigations into the sex abuse allegations against Cardinal McCarrick, “a further thorough study of the entire documentation present in the archives of the dicasteries and offices of the Holy See regarding the former Cardinal McCarrick” will take place.

The goal of the study, the statement said, is “to ascertain all the relevant facts, to place them in their historical context and to evaluate them objectively.” 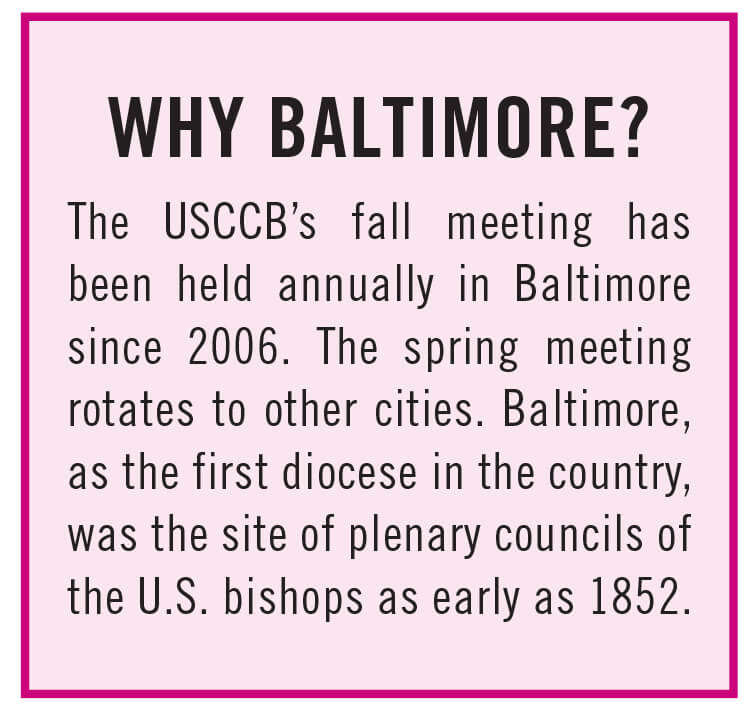 The bishops’ meeting also comes a month after Pope Francis accepted Oct. 12 the resignation of Cardinal Donald W. Wuerl as archbishop of Washington. The Archdiocese of Washington announced the pope has named Cardinal Wuerl as apostolic administrator to oversee the archdiocese until a successor is named.

Cardinal Wuerl had been facing pressure to resign after an Aug. 14 grand jury report detailing sexual abuse claims in six Pennsylvania dioceses painted a mixed picture of how he handled some of the cases when he was bishop in Pittsburgh from 1988 until 2006.

The 77-year-old cardinal had submitted his resignation, as is mandatory, to the pope when he turned 75, but it had not been accepted until now.

Archbishop Lori said that as he has been going around the Archdiocese of Baltimore for Masses and listening sessions, he hears a number of common themes.

One is a call for greater transparency on the part of the church in general and the Archdiocese of Baltimore in particular. People are also looking for a spirit of genuine repentance and reform on the part of bishops.

“That’s not simply in terms of words, but actions, I think. I’m hearing the need for concrete steps to address the failure of bishops to deal candidly and fairly with allegations of abuse, whether in the past or in the present,” he said.

He also hears a call for greater involvement of the laity, especially women, and concern about seminary formation. Another common concern is the need to continually renew policies to keep children safe.

“I’m also hearing much appreciation for pastors across the archdiocese and the way that they have accompanied their people through this very difficult time and the difficult times to come,” the archbishop said.

In addition to regional listening sessions, the archdiocese opened up “virtual town halls” via email and smartphone apps, which have generated more than 6,000 comments since late September.

Archbishop Lori said he will bring these concerns to the bishops’ meeting in formal sessions as well as informal ways. The archbishop is also a member of the USCCB Committee on Priorities and Plans, so he is able to bring forward in that venue the concerns of the faithful – as he pledged to those at the sessions that he would do.

He said other bishops are getting feedback from their flocks, albeit a little differently in each place.

“The important thing that’s underway vigorously at the moment is the formation of an Archdiocesan Pastoral Council that will be the recipient of not only the information regarding the current crisis but also – on a go-forward basis – other pastoral priorities,” Archbishop Lori said. “I think this has really opened up an avenue for communication and collaboration.”

Although the bishops are tabling most of the regular agenda, the archbishop said he thinks the bishops will vote on a national pastoral letter about racism. He has served as a consultant to the bishops’ Committee Against Racism, and wrote a pastoral reflection earlier this year to commemorate the principles of nonviolence preached by the Rev. Dr. Martin Luther King Jr.

He said the bishops’ pastoral has been through an extensive preparation process, making it continually stronger.

“It is a pastoral that recognizes the history of the church with regard for racism in the United States. I think it takes us to the biblical roots, both of the sins of racism and what a converted attitude ought to look like,” Archbishop Lori said. “It provides numbers of steps that local communities in dioceses can take to address racism.”

He said there more than an element of racism in some of the “longstanding, heartbreaking structural problems that beset our city. … I think that this provides us an opportunity to shine the light on many of these problems which are certainly part of a very bad truth of racism.”

Catholic News Service contributed to this story from Rome and Washington.