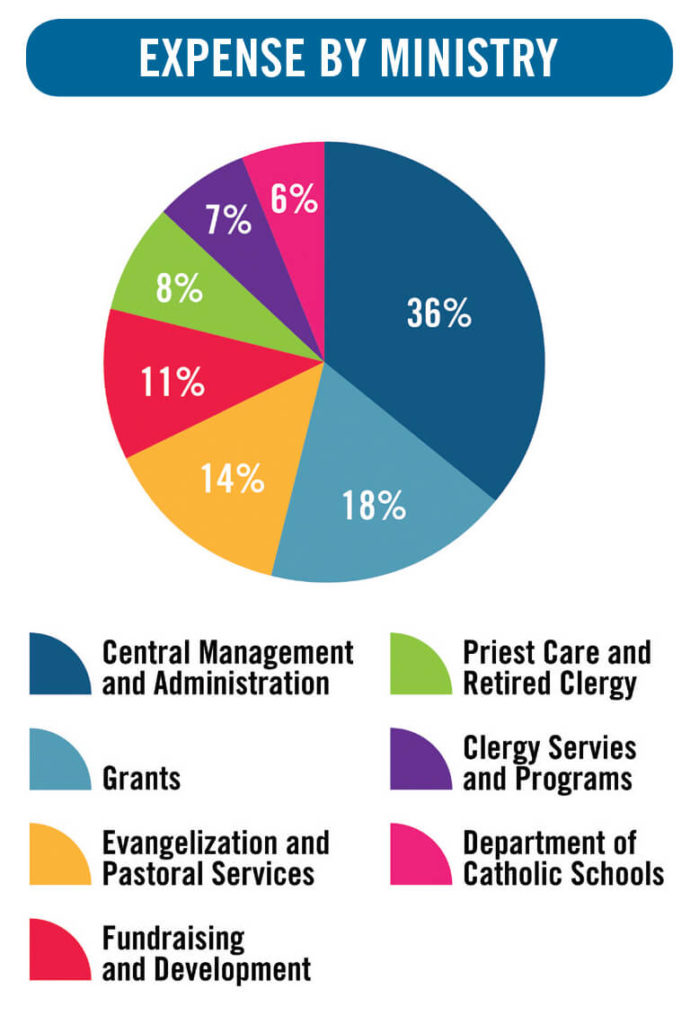 The Archdiocese of Baltimore saw an operating surplus in its Central Services of $36,813 in fiscal year 2019, as compared with an operating loss of $2.7 million in the prior fiscal year.

John Matera, CFO and executive director of management services for the archdiocese, said market conditions, however, contributed to an overall net loss of $9.2 million in FY19, as opposed to a gain in fiscal 2018 of $18.9 million.

Both of those swings on the balance sheet can be attributed to changes in market rates, specifically interest rates on archdiocesan liabilities in the lay pension fund and interest-rate protection agreements. The archdiocesan fiscal year runs July 1-June 30.

Part of the concerns for FY19 were costs for education and support of seminarians, which was higher than anticipated with more men studying for the priesthood.

“That’s a good problem to have,” Matera said, noting that the archdiocese reallocated resources in the current budget to cover an even higher number of seminarians.

Support for seminarians and vocations – totaling more than $2.1 million in FY19 – comes from several sources, including the Central Services budget, the Annual Appeal for Catholic Ministries and a direct appeal for seminary support.

Matera said parish offertory collections – on which the archdiocese relies for the cathedraticum, a percentage of the parish plate collection that supports the work of the archdiocese – were affected by a number of factors.

A volatile stock market and changes in charitable tax deductions for tax year 2018 also had an impact.

Matera noted that many nonprofits across the country indicated contributions were down 4 to 5 percent.

The impact on the cathedraticum from the decrease in plate offerings was mitigated by parish programs to enhance their offertory and encourage electronic giving.

Matera noted that the finance report reflects the last few parish drives for the archdiocesan Embracing Our Mission capital campaign, a significant portion of which was dedicated to educational facilities and endowments. One example of that was the ability to move St. Maria Goretti High School in Hagerstown from its site in a flood plain to a new campus about a mile away, instead of closing. With funds from Embracing Our Mission, the school now has a 21st-century facility. “We absolutely could not have done that without this campaign,” Matera said.

The archdiocese has significant controls in place to ensure fiscal integrity, he said.

Incoming donations to the annual appeal are counted and recorded in a secure-access room at the Catholic Center. The finance department also segregates staff duties to guard against fraud and recently installed drop-safes, among other security measures.

The archdiocesan finance council, the Board of Financial Administration (BOFA), meets regularly to oversee budgets, audits and fiscal policy.

Matera cited examples of how BOFA committees provided value to parishes and schools. In one case, a parish was offered a donation of a plot of land worth as much as $1 million. However, an evaluation by BOFA’s Facilities and Real Estate Commission showed the property would be difficult to develop and would effectively be a negative value to the parish.

Mercy Sister Helen Amos, executive chairwoman of the Board of Trustees of Mercy Health Services, serves as vice chairwoman of BOFA. Though the finance council is required by Canon Law to have at least three lay people who are skilled in financial affairs and civil law, she said the Baltimore group has a majority of lay people.

“For the most part, the council’s role is consultative, but there are specific matters where the size of a proposed transaction requires the archbishop to have the consent of BOFA in order to act,” she said in an email interview.

In fiscal 2019, BOFA also had a specific role in the selection of Matera, who had been longtime controller of the archdiocese, when the CFO position was vacant.

“Fortunately, John was well known to all the BOFA members … (who) were able to speak to his suitability for this important role,” she said.

Sister Helen said she welcomes the opportunity to provide advice based on her experience as a health care administrator and a woman religious “in regard to sound business and management practices – making prudent judgments, planning ahead, anticipating consequences (good or bad) of actions under consideration.”

Serving on BOFA allows her to contribute to the transparency and accountability of the archbishop and his management staff, she said.

BOFA’s advice can also help the archdiocese’s Central Service with respect to the financial management of parishes and schools. “An example is the Energy Cooperative, which enables parishes and schools to manage their energy needs cooperatively,” Sister Amos said. “It’s a great program, not only for managing costs but also as a means of focusing on our collective carbon footprint, promoting green energy, etc.”

For more on fiscal accountability in the Archdiocese of Baltimore, click here.