Editor’s note: A recorded video livestream of the anniversary Mass is available for viewing at the bottom of this story.

Neither Archbishop John Carroll, the first Catholic bishop in the United States, who started the project to build America’s first cathedral, nor Archbishop Ambrose Maréchal, the third archbishop of Baltimore, who brought it to completion, could have predicted its impact over the centuries, the current archbishop said.

Archbishop William E. Lori, 16th archbishop of Baltimore, celebrated a Mass May 31 to mark the 200th anniversary of the dedication of the Basilica of the National Shrine of the Assumption of the Blessed Virgin Mary. Immediately after the Mass, he dedicated a chapel in the basilica’s undercroft for perpetual eucharistic adoration, making the spiritual practice available for the first time ever in the city, as far as parish leaders and researchers can determine.

Archbishop Lori noted in his homily that Archbishop Maréchal had announced in a pastoral letter released at the time of the dedication in 1821 that the Gospel would be proclaimed from the pulpit, sins would be forgiven through the sacraments of baptism and penance, and the faithful would receive “courage in their temptations; comforts in their afflictions and infirmities; light in their doubts; and all the graces necessary to persevere in the service and love of God” and that those suffering from spiritual infirmities would be made whole.

Archbishop Lori said, “These most fundamental purposes of this basilica continue in our times, and today, we give thanks for the torrent of graces communicated and received in this sacred space.”

The Baltimore Basilica – now one of two co-cathedrals for the archdiocese – has witnessed the consecration of more bishops than any other structure in the United States, he said. It was also the site of seven provincial and three plenary councils of Baltimore, “meetings in which the nation’s bishops laid the foundations of the Catholic Church in the United States and gave it its institutional shape.”

The Catholic education system in the U.S. was developed in those councils as was the Baltimore Catechism, which laid the groundwork for millions who grew up in the Catholic faith.

“There are, to be sure, bigger and grander cathedrals and churches across our land,” Archbishop Lori said, “but none is so venerable as this haven of tranquility amid the chaos of modern life, none so noble as this house of prayer where reigns the peace of Christ in troubled times.”

The archbishop noted that Archbishop Carroll retained Benjamin Henry Latrobe, architect of the U.S. Capitol, to provide a neoclassical structure “to be filled with light, so as to reflect the light of faith and the light of reason, and yes, the sunlight of authentic freedom.”

He encouraged the more than 400 people in attendance to look up at the main dome of the basilica, whose oculus includes an image of the Holy Spirit, and imagine the solid foundations of the building. In fact, he noted, upon visiting the church’s undercroft, one can see the inverted arches that support and sustain the dome.

“Yet, the foundations of this basilica are far more solid and deep than that” – Jesus Christ, Son of God and Son of Mary, he said. “This cathedral finds in its patroness, the Blessed ever-Virgin Mary, an even more sublime model and pattern for its form, its prayer and its mission.”

The day of the dedication in 1821 was the feast of Pentecost, the archbishop noted after the Mass. In 2021, it was the feast of the Visitation of the Blessed Virgin Mary to her cousin Elizabeth, a change to the calendar that came about in 1969.

“In the radiant light of this basilica, we feel the maternal warmth of Mary’s love, as here we listen to the voice of Christ proclaimed in the Scriptures, re-enact sacramentally the death and resurrection of her divine son, receive his body, blood, soul and divinity, and, like Mary’s cousin Elizabeth, adore him in the Blessed Sacrament reserved.”

He likened Mary to a tabernacle and noted that her cousin Elizabeth was the first to adore and profess the divinity of Jesus at such a shrine.

“And like Mary, having received our Lord into our hearts, we too become temples, as it were, ‘tabernacles,’ who are called to bring Christ outward, no longer to the hill country of Judea but now to the streets of Baltimore and beyond, streets where we meet ‘Jesus in his distressing disguises’ as St. Teresa of Kolkata often said, whether in the poor and homeless or in those who are spiritually impoverished,” Archbishop Lori said.

A 2-year-old ministry at the basilica parish, founded by its current rector, Father James Boric, engages lay ministers who commit to spending time in prayer before going into the streets of the city to meet those experiencing homelessness. The Source of All Hope ministry, started in 2019, has expanded during the pandemic. The urban ministers, grounded in participation at daily Mass and adoration of the Blessed Sacrament, circulate through downtown a few days a week, checking on those they have befriended and handing out socks, bottles of water and lunches.

Colin Miller and Abby Steele, co-directors of the ministry, were among the first adorers when the archbishop dedicated the newly renovated chapel in the basilica undercroft to begin perpetual adoration.

Maria Murillo, a parishioner of the basilica, was the first “official” adorer signed up for the first hour. She said she made the commitment because “God is part of my life and I just want to grow in faith and do his holy will.” She said she would pray for world peace in her time before the Eucharist.

Ana Farias, who coordinates the perpetual adoration schedule, said the basilica has at least one person committed for each of the 168 hours in the week. Some hours have more than one person, and visitors are welcome during the basilica’s regular hours, through the main church. Those who are approved as regular adorers will have an access code that allows them to visit the Blessed Sacrament at any time. The chapel has seats for four people, plus a kneeler directly in front of the tabernacle that also serves as a monstrance.

A keypad allows access to a side gate near the undercroft chapel entrance, and another protects the door into the basilica itself. Security personnel are available to escort adorers to and from their vehicles, if desired.

Adorers are coming not only from the basilica parish but from Harford County, Anne Arundel County and other places, Farias said.

During the chapel dedication, Archbishop Lori blessed the tabernacle with incense, before Father Boric and Deacon Robert Shephard placed the Eucharist into an interior door in the tabernacle in which a luna – a round receptacle holding the sacred host – allows the Eucharist to be visible for adoration.

The new chapel is dedicated to St. John Paul II, who visited the basilica in 1995. The gleaming metallic tabernacle stands on a base inscribed with the saint’s motto, “Totus Tuus” (“All yours”).

After the Mass and dedication, Father Boric said, “It is amazing to finally have perpetual adoration in the city. “All we can do is what God asks of us, and say ‘yes’ at the time. … It’s got to be his work, and this is.”

The rector said that now that the tabernacle is open and the Eucharist is on view, the hope is to never have to close it, because there will always be someone praying before the Blessed Sacrament.

Archbishop Lori said he believes untold blessings will come from having perpetual adoration at the basilica, including vocations, evangelization and peace. He said the basilica parish is already producing vocations to the priesthood and religious life, and he hopes this will inspire more.

Basilica parishioners Katie and Chris Marquette attended the Mass with their 2-month-old daughter Josie, who sported a onesie that said, “G is for Gregorian chant.” The Mass featured most of its music in chant and polyphony.

They said the young adults’ group at the parish, of which they are members, is important because its members are excited and ready to spread the word of God. They noted that many young families like their own are growing in the parish.

The Marquettes are converts who came into the Catholic church with the help of Father Boric.

“We’re excited by what Father James has done,” Katie said. “We love the basilica and everything it stands for.”

Click play below to watch a recorded livestream of the Mass and adoration chapel dedication. 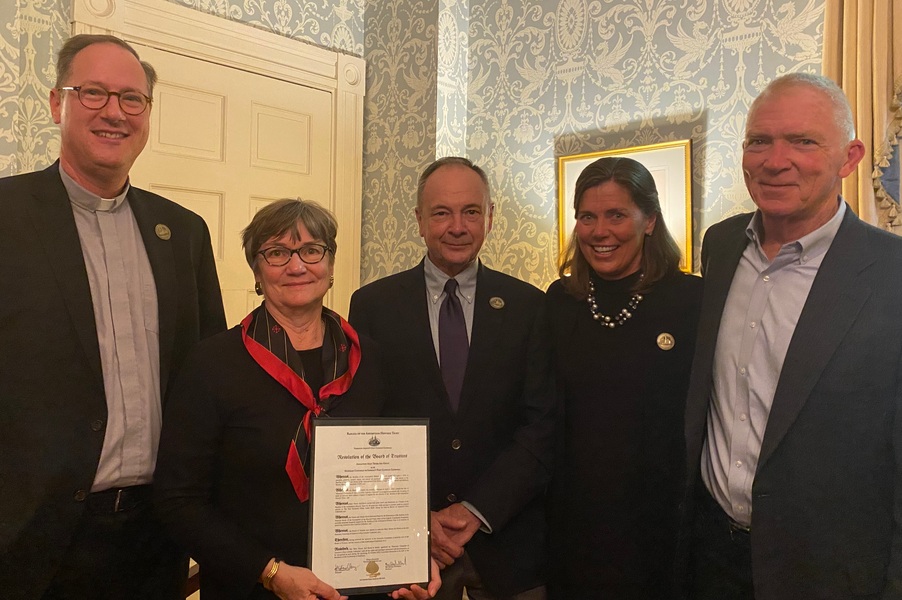 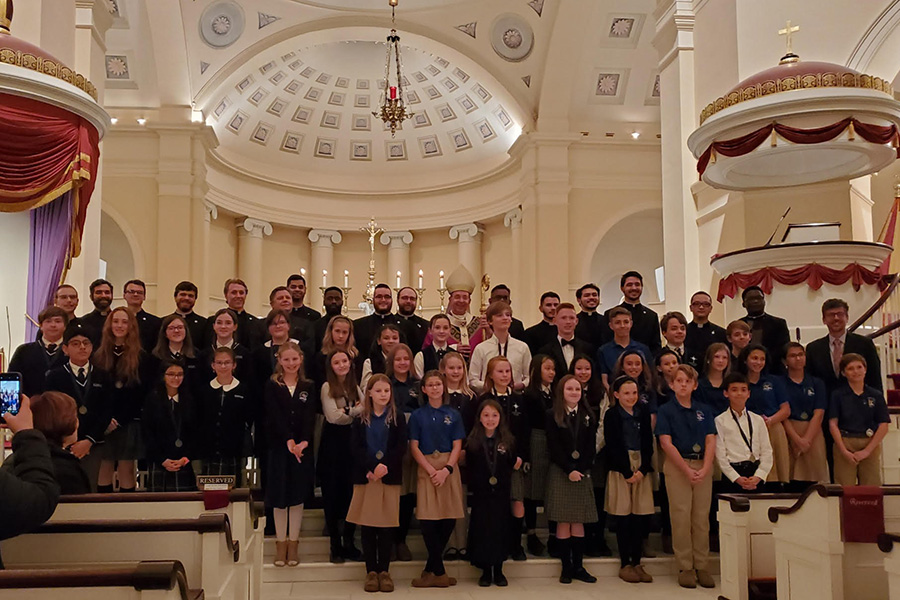