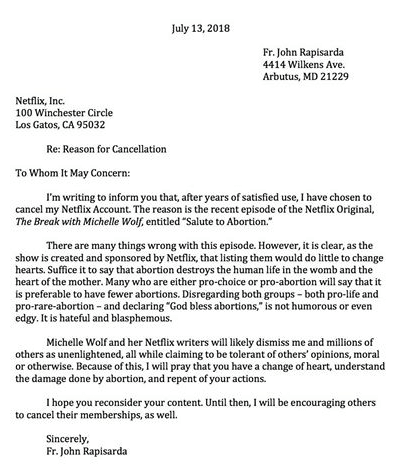 Eleven days after the pastor of Our Lady of Victory in Arbutus shared the letter July 13, the original post has been shared 618 times, and has garnered nearly 450 reactions.

In his letter, Father Rapisarda notes that he cancelled his subscription “after years of satisfied use” due a recent episode of the Netflix original “The Break with Michelle Wolf.” The episode was titled “Salute to Abortion.”

“There are many things wrong with this episode,” he said in the letter. “Suffice it to say that abortion destroys the human life in the womb and the heart of the mother. Many who are either pro-choice or pro-abortion will say that it is preferable to have fewer abortions. Disregarding both groups – both pro-life and pro-rare-abortion – and declaring ‘God bless abortions,’ is not humorous or edgy. It is hateful and blasphemous.”

The priest noted that “Michelle Wolf and her Netflix writers will likely dismiss me and millions of others as unenlightened, all while claiming to be tolerant of others’ opinions, moral or otherwise.”

“Because of this,” he wrote, “I will pray that you have a change of heart, understand the damage done by abortion, and repent of your actions.”

He concluded by saying he hopes Netflix will reconsider its content, but until then, will encourage others to cancel their memberships.

Father Rapisarda was on retreat and unavailable for comment when the Catholic Review tried to contact him about his letter.