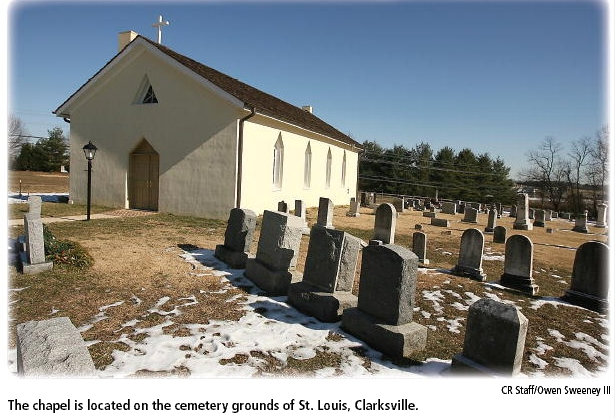 CLARKSVILLE – Only a few years ago, the quaint little chapel that served as the first church of St. Louis in Clarksville was on the verge of ruin. After decades of neglect, the historic house of worship was in a terrible state of disrepair, suffering structural weaknesses and cracked walls. At some point, a gaping hole had even been carved out of a wall to make room for tractors and lawn-care equipment that rested atop the chapel’s dirt floor.

After a recently completed $700,000 restoration, the small chapel has been stabilized, a new roof added, the exterior made over and the interior returned to the elegant simplicity that characterized the structure at the time it was erected in 1855.

Located on the grounds of the parish cemetery, the old church now serves as a “cemetery chapel” where people may visit for private devotions and where internment services can be held in inclement weather.

Located in an area of Howard County that is bustling with the construction of new homes, shopping centers and businesses, the restored chapel serves as a link to a bygone era.

St. Louis traces its roots to a private chapel built by Charles Carroll at his home, Doughoregan Manor. The only Catholic signer of the Declaration of Independence allowed area Catholics to worship there privately at a time when it was illegal for Catholics to worship in public. As the community grew, the 1855 chapel was built, serving as the main church for St. Louis until a larger church was built in 1889. Two more churches would follow as the community continued growing.

“It’s almost like going back into time,” said Monsignor Luca, standing inside the 1855 chapel and peering through clear-glass windows at tombstones marked with dates that stretch back more than 150 years.

“You look out there, and they would have seen the same thing,” he said.

Symbolic of the Holy Trinity, the interior features triangles in the sanctuary, above the doors and windows. The oak floor was installed in the style of the era, using two different lengths of wood planks, Monsignor Luca said.

“This was a poor farming community, and they couldn’t afford many embellishments,” the pastor said.

During the restoration process, church workers discovered one of the original kerosene lamps that hung from the ceiling. Using it as a model, exact replicas were reproduced and wired for electricity. A replica of the cross that stood above the entrance was also hung, and an altar, altar rail, Stations of the Cross, sanctuary lamp and statues were acquired from churches built around 1849. Pews were installed from St. Louis’ 1889 church.

Mike Bochniewicz and his son, Michael Bochniewicz, parishioners of St. Louis, worked together to restore the altar.

“It had four different colors of paint on it,” remembered Mike Bochniewicz. “We had to take it down to bare wood and refinish it.”

While faithful to the architectural integrity of the original, the restored chapel includes one very modern convenience: it can be locked and unlocked electronically from the main St. Louis campus about a mile away.