Baltimore’s Italian community will launch its 128th Columbus Day Commemoration & Parade Sunday, Oct. 7 – an event deemed the longest-running Columbus Day celebration in the United States.It happens purposefully in October, not only because of Columbus Day itself, but since October is Italian Heritage Month. 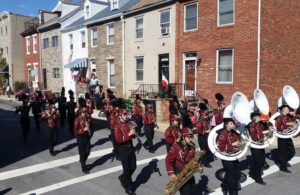 In spite of the continuing debate about the character of Christopher Columbus, let’s peek at how our city’s warmhearted Italian community celebrates this part of their red, white and green heritage. We shall leave the naysayers to negate the chronicle of Christopher Columbus and the story’s centuries-old details, and chuckle that some are the same people willing to accept Monday as a holiday. (Really now, if they feel that strongly, enough to deface Christopher’s local statues, why are they honoring Columbus by not attending school or showing up at the office?)

So then, without delving into all of that no-win debauchery or addressing their hideous graffiti crimes, let’s chat about the celebratory Mass at St. Leo the Great in historic Little Italy. The 9:30 a.m. liturgy, presided by Pallottine Father Bernie Carman, pastor, will kick off Sunday’s festivities, usually with a packed church.

It’s worth attending if only to see the plumed colorful regalia worn by the Knights of Columbus Saint Vincent Pallotti Council – an integral part of the parish – and the poker-face pomp and circumstance of their lineup inside and outside of the church. It is marvelous – one of my favorite parts about every event surrounding my parish in “The Neighborhood.” 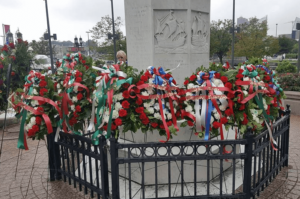 Post-Mass, the clergy, parishioners, and visitors walk several blocks through Little Italy to Columbus Piazza on President Street. There the annual wreath-laying ceremony happens, which will involve Italian community dignitaries; an invocation by Father Bernie; words by Maryland State Senate rep, James Rosapepe; and the laying of floral wreaths at the base of the Columbus statue by 17 representatives from various organizations and civic groups (most Italian-related).

Cristoforo Colombo himself will be on site: Don Castronova, a parishioner of Our Lady of Pompeii, Highlandtown, and an active member of the Little Italy community, has been portraying Columbus in costume since 1970!

And finally, the most exciting part of the day … oh, doesn’t everyone love the happy festivity of a parade?! I do! This year’s parade begins at Oriole Park’s Lot C; after the marching groups wind through city streets, the parade ends in Little Italy in front of the viewing stand on S. Exeter Street near the church. Grand Marshalls will be James Rosapepe and Don Castronova.

The guts of the parade consist of five high school marching bands from Baltimore City and Baltimore and Harford counties; numerous Italian-themed floats and decorated props by various Sons & Daughters of Italy lodges; sparkling vintage and new cars; and a 150-member group of performers from the Latino community dancing their way into the hearts of onlookers, as 30 horses prance around them.

“We hope you join us in Baltimore to support our celebration of Columbus,” said Al Massa, parade coordinator, who has assisted John Pica, parade chair. “Our commemoration always has involved St. Leo’s Church and the Italian community at large.”

As the parade ends, note there will be a bocce tournament in play on Stiles Street on Little Italy’s bocce courts; and various restaurants will offer al fresco dining along most of S. High Street.

The schedule of activities is as follows:

Street closure in Little Italy will be approximately 10 am to 6 pm along S. High Street between Trinity and Stiles Streets. To view previous years’ parade and wreath-laying photos, click here.