Father Michael Orchik was raised in New Kensington, Pa., northeast of Pittsburgh. He attended college there and then seminary in Washington, D.C., so how is it that he came to give nearly five decades of his life to the Archdiocese of Baltimore?

The influences in that journey include an Army ROTC scholarship to Duquesne University, serving his country as a company commander at Edgewood Arsenal, teaching in the Harford County public school system, and a pastor in Bel Air.

“Baltimore is a real down-to-earth town and it just suits me, suits my personality,” Father Orchik said.

He will retire as pastor of Shrine of the Little Flower in the Belair-Edison neighborhood of Baltimore July 1. That provides another bit of irony, as Father Orchik finished civilian life working at one of the most rural high schools in the Baltimore metropolitan area, then spent his entire priesthood in Baltimore City.

He was discharged from active Army duty as a first lieutenant in 1966, and began a three-year stint at North Harford High School, where he taught English, coached basketball and began both its track and field and cross country programs. That job offer came as he was back home, serving as the best man in a friend’s wedding, and considering a local position with a pharmaceutical company.

“When the offer to teach came, I still remember, it was like the weight of the world was lifted off my shoulders,” Father Orchik said. “After the wedding, I remember driving back into the Baltimore area, with a feeling of relief. It just seems like I was meant to be here.”

Worshipping at St. Margaret in Bel Air and observing the fulfillment of the parish and Father Alphonse Rose, the pastor, Father Orchik reconsidered the priesthood.

“I had that tug for a long time,” Father Orchik said. “I grew up in a family that was very faithful to the church. I like watching what priests do. When you’re in the Army and you’re thinking about your future, you consider all kinds of things. The chaplain told me to pray on it. Then, at St. Margaret, Father Al Rose became a mentor to me and remained one until he died.”

It was Father Rose who drove him to Baltimore to meet Cardinal Lawrence Shehan in 1969. The archbishop of Baltimore approved his candidacy for the priesthood and gave him the option of four seminaries.

Father Orchik’s choice of the Theological College at The Catholic University of America helps explain what became his affinity for older, urban parishes. His four years there included two as an intern at the Cathedral of St. Matthew the Apostle, a few blocks north of the White House.

“It’s the cathedral from which Jack Kennedy was buried,” Father Orchik said. “It’s a very traditional place, and I’m very traditional. I grew to like city life. By the time I went to the personnel board to see what my first assignment would be, I requested a city assignment. If I had gone back to Harford County, I couldn’t have slept at night; it’s too quiet. I love the city.”

He began at St. Patrick, in Fells Point, before it was gentrified; served at Sacred Heart of Mary in Graceland Park when it was a General Motors, rather than an Amazon neighborhood, and its polka dances appealed to “a Polish kid from Pittsburgh”; moved on to St. Rose of Lima in Brooklyn as the families who populated its once-burgeoning parish school moved out to Anne Arundel County; and experienced more of the same at Little Flower.

Its beautiful church sits on Belair Road. Less than a mile to the west, on Harford Road, is St. Francis of Assisi, where Monsignor William F. Burke has been not just pastor, but an official leader of several social justice programs.

“I’m not an astute guy, like Bill Burke, when it comes to community organizing,” Father Orchik said. “I attend ministry meetings of the Northeast Catholic Community, but I’m more of a hands-on guy.

“There are a lot of people around here who have either no income or very little. They have jobs, but they don’t pay very much and they need a lot of help. People come to the door, and we help them with their rent and other bills, pay for their medicine, get food. That’s been the dominant activity of my time here for years, working with the poor.”

For years, the staff answering those callers has consisted of Father Orchik and Jeannie Erdbrink, the secretary.

“I would describe it as an open door here,” he said. “Somebody is in need. They knock on the door. There’s going to be a response.”

Father Orchik is famous, when necessary, for accessing the offertory and going into his own funds to fill that need.

“He’s still going into his own pocket,” said Garry Brown, the corporator and business manager for Little Flower. “His duty, to the parish and the community, knows no end. The little things he does, no one knows about. He’s a very quiet hero, but like John Wayne, at the end of the movie, you know he’s going to show up and make things right.”

Brown also serves as president of the alumni association of Little Flower School, which closed in 2005. In the 1950s it enrolled more than 1,700 students. Its annual bull roast, Oct. 10 this year, serves as a parish reunion.

Click play below to listen to a radio interview with Father Orchik about the spirituality of St. Thérèse of Lisieux. Story continues beneath.

CatholicReview · May 23, 2021 | The Spirituality of the Little Way/Parents of a Saint

“I admire how the alumni continue to support us and get together with each other regularly,” Father Orchik said. “The people who went to school here maintain friendships throughout their lives. As I often say to them, a friendship made at Little Flower lasts forever.

“Also, there is a traditional piety here that suits me. The prayer life of people is traditional. I think we’ve had good music here.”

Father Orchik continues to take great satisfaction in sharing the sacraments. That includes offering the funeral Masses for both of his parents, Mary and Michael, in their home parish – but with a bus of Little Flower people among the faithful.

Father Orchik, who turned 81 May 14, said he was not ready to retire. He will remain active as chaplain to the St. Martin’s Home for the Aged in Catonsville, which is sponsored and run by the Little Sisters of the Poor.

Father Orchik will celebrate his final Sunday Mass as pastor of Little Flower June 27, at 11 a.m. The liturgy will include the choir, organ and brass, under the direction of Sean O’Connor and Michael Britt. Overflow seating will be available in the lower chapel, where the Mass will be livestreamed.

On helping the poor: “There are a lot of people around here who have either no income or very little. They have jobs, but they don’t pay very much and they need a lot of help. People come to the door, and we help them with their rent and other bills, pay for their medicine, get food.” 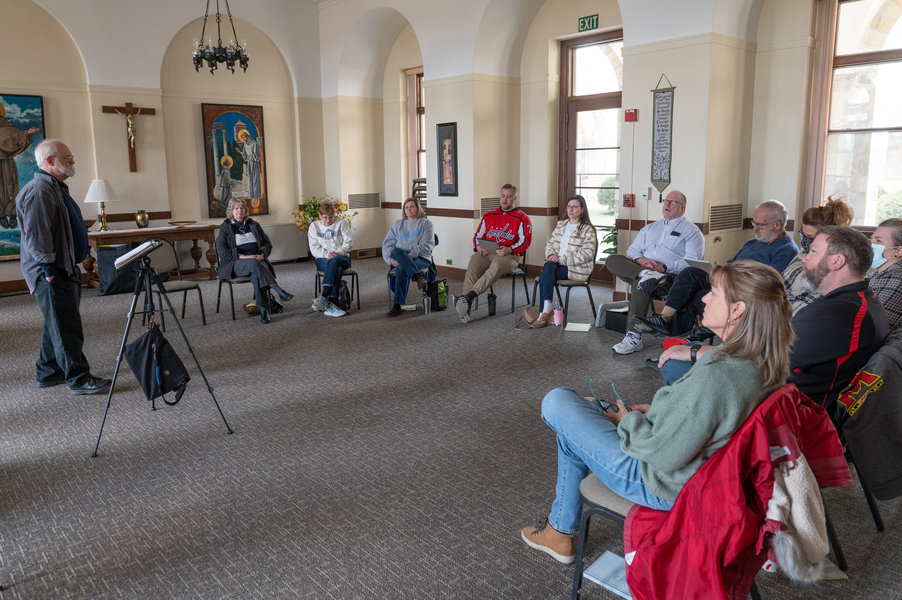