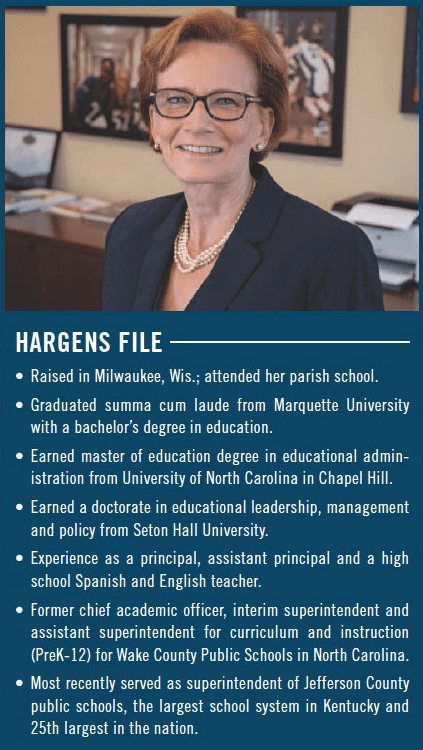 Encouraging students to reach out to others through community service has always been a critical part of Catholic education. This year, however, helping others is getting even more attention as the Archdiocese of Baltimore has declared the 2018-19 school year a “Year of Service.”

Dr. Donna Hargens, the newly appointed superintendent of Catholic schools for the archdiocese who began her new job July 2, said the designation is a way of highlighting missionary discipleship in the schools in a concentrated way.

“This is a chance to get really active and help improve the community,” said Hargens, who most recently served as superintendent of Jefferson County Public Schools in Louisville, Ky. “There certainly are a lot of needs.”

The projects developed by teachers and students will be closely tied to classroom learning, Hargens said. That might mean writing essays about service experiences or conducting scientific investigations into an environmental project.

“It’s not just service projects that stand isolated from the regular learning the school is undertaking,” she said.

Through an online system, the archdiocese will track and quantify service efforts. That will culminate in an end-of-the-year celebration, Hargens said.

“It’s all obviously related to the Catholic faith,” she said. “I think people are going to get really creative. It’s going to get a little competitive to see who can do the most good – and that’s a good thing.”

Hargens believes Catholic schools help students meet their potential, and  recalled being a second-grader at St. Helen School in Milwaukee when her teacher, a religious sister, wrote her a note saying she could one day be valedictorian.

“I worked to be that,” she said. “I was my high school valedictorian because of the expectations and the foundation and the community of learners and going to Mass.”

In the new academic year, schools throughout the archdiocese will continue to develop curriculum mapping, a digital system begun several years ago that keeps precise measure of what’s happening in the classroom. At the end of each class or at the end of the week, teachers enter information about everything they actually covered in their teaching sessions, not just what they planned to cover.

A benefit is that new teachers are more easily able to learn from experienced teachers and have access to the same resources, the superintendent said.

Because students have different learning needs, the archdiocese will also look at ways of providing “differentiated support,” Hargens said.

“We need to know what the schools need and make sure we’re providing that support,” she said.

As the archdiocese moves forward with plans for building a new K-8 school in West Baltimore, Hargens said it will be important to make sure the school is “state-of-the art” and “excellent in every aspect of it.”

“It’s the opportunity to build a community around what you want this school to be and to engage community members and students in building this vision for the new school,” she said.

Hargens has already met numerous Catholic school educators and parish priests across the archdiocese. She intends to meet more as she learns about a system made up of 44 archdiocesan schools in nine jurisdictions.

“There’s so much good work going on and so many good people doing that work,” she said. “I’m excited to be here.”

Listen to a Catholic Baltimore radio interview with Dr. Donna Hargens below.