HYDES – Like Isaac Newton and Bernard of Chartres before him, Monsignor Richard E. Cramblitt acknowledges many influences, among them religious men and women who, in his view, remain giants on whose shoulders he was able to see far.

Monsignor Cramblitt, 71, completed his active priesthood the weekend of Nov. 25-26, and was to formally retire Dec. 1 as pastor of St. John the Evangelist, Long Green Valley.

“I’ve been a priest for 45 years,” Monsignor Cramblitt told the Review. “When I look at how growth has happened in my life – emotionally, spiritually, personally – I step back in amazement and can’t help but the see the grace of God there.”

He begins with his boyhood at Immaculate Conception Parish in Towson, where the pastor was the since-deceased Monsignor Joseph Nelligan.

“I just admired him as much as you can,” Monsignor Cramblitt said, of the priest who vested him at his 1972 ordination. “He was a very skilled, polished, professional man. He clearly gave that parish good direction. He knew how to move things forward, and had the parish with him.”

The clergy there also included Father Francis A. Morrison, who died in 1974. 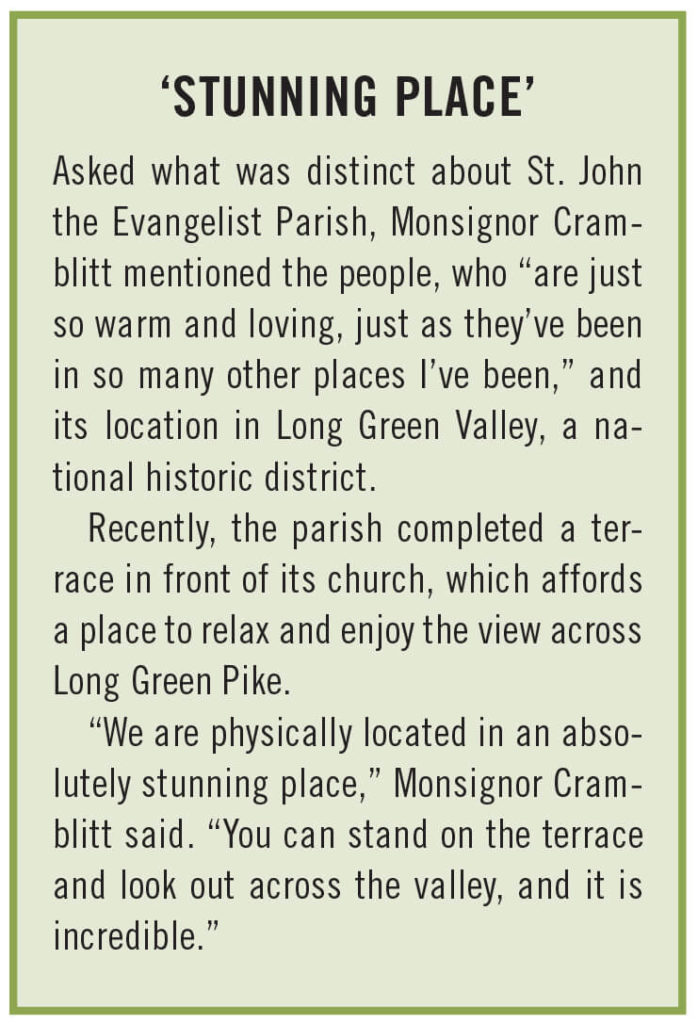 “His nature and his demeanor made the vocation appealing,” Monsignor Cramblitt said. “He was the most joyful man. When I was serving at the altar and he walked into the sacristy, I was happy.”

While he began thinking about the priesthood as early as fifth grade, Father Morrison advised Monsignor Cramblitt not to enter minor seminary, which meant instead attending high school at the former Towson Catholic, which was part of the parish. A highly-regarded homilist, he traces that skill back to his public speaking coach at TC, Sister Theodore Klingseisen, of the Sisters of St. Francis of Philadelphia.

At what was then Loyola College, there were required philosophy courses and Jesuit priests who further broadened his education, including Father James L. Connor, who taught Scripture and was described as “brilliant” by Monsignor Cramblitt.

St. Mary’s Seminary in Baltimore and seven trips to the Holy Land added to a perspective that took Monsignor Cramblitt to six parishes, including four where he was pastor, starting with St. Ann in Hagerstown. He went there as an associate in June 1984 and became pastor 17 months later.

“I thought it was the end of the earth,” he said, of the assignment. “I drove out there not wearing a (clerical) collar, and walked Main Street. People on the street would say, ‘Hi, how are you?’ I thought, ‘This is different.’ I came to love Hagerstown, the beauty of the place, the people and the church.”

Monsignor Cramblitt spent four years, 1991-95, leading St. Joseph in Fullerton, where he was impressed by an active school community and a strong corps of volunteers.

His longest tenure, 1995-2010, was at Shrine of the Sacred Heart in Mount Washington, where what he described as “superior music ministers” created a “unique liturgical program.”

He was saddened when its school was among those closed by the Archdiocese of Baltimore in 2010, which made St. John the Evangelist School’s recognition in late September as a National Blue Ribbon School of Excellence all the sweeter.

“I am so proud of them,” Monsignor Cramblitt said. “It is a superb school, on every level. The science is especially good. … Nobody falls through the cracks. Every student gets into the high school of their first choice.”

Christine Blake, the principal, cites the pastor’s role in the school’s success.

“He’s been instrumental in mentoring me,” Blake said. “He’s a wealth of knowledge and information, in addition to being a kind, funny, wonderful gentleman. Everything he does is through the lens of evangelization.”

Monsignor Cramblitt underwent spinal surgery in 2016, an ordeal that exhausted him and hastened his retirement. It will not end his involvement with the Knights of Malta, which has included at least 14 – he’s lost count – trips to Lourdes with “malades,” in French, sick people.

“It’s a whole lot easier to identify with them,” Monsignor Cramblitt said, of his own health issues. “I can see where they (malades) are and realize this isn’t just a medical problem that you treat with surgery or a pill. You have to extend empathy and compassion.”