A funeral Mass for School Sister of Notre Dame Marion Agnes Jerzak was offered Nov. 27 at Villa Assumpta in Baltimore. Sister Marion, who served six schools in the Archdiocese of Baltimore, died Nov. 15; she was 88. 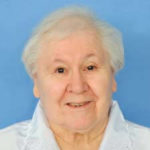 Born in Pennsylvania and raised in Rochester, N.Y., Sister Marion was taught by the School Sisters of Notre Dame at Most Holy Redeemer School. She spent part of her candidature on a mission to St. Patrick School in Cumberland. A School Sister of Notre Dame for 66 years, she professed her first vows in 1951.

Later, she ministered at Villa Assumpta in community service and as a chauffeur.

According to an obituary prepared by her order, she was described as one of “the best kept secrets of the School Sisters of Notre Dame.” Sister Marion was a special person of gentleness and unassuming gratefulness. She had a firm, yet gentle teaching style with the young children with whom she spent so many years.

She was also remembered for a great sense of humor and a fun disposition that attracted others. She also liked to entertain by playing music with her ukulele.