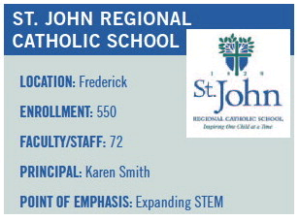 FREDERICK – St. John Regional Catholic School (SJRCS) didn’t rest on its laurels after being named a National Blue Ribbon School of Excellence in 2009.

The pre-K-8 school in Frederick County kept up-to-date with the latest advancements in STEM (science, technology, engineering and math).

Karen Smith, principal, described her students as “technology natives.” With I-270, a technology corridor, connecting Frederick to the nation’s capital, many have parents who work in STEM fields.

“We need to make sure that we’re keeping up with what they (students) need to know,” Smith said.

The newer technologies at SJRCS, which receives support from seven parishes in the county, include 3D printers, iPads, touch-screen computers and electronic programs.

Assisting with the incorporation of the advancements is Kim Hanner, technology coordinator and math teacher. Her goal is to not overwhelm students, but to enhance their education with technology.

Liz Brigham, a retired educator who was taught at St. Louis School by the Sisters of Divine Providence of Kentucky in

“They’ve got the world at their fingertips,” said Hanner, who compares the integration of technology to taking a field trip without  leaving school.

Seventh- and eighth-graders have a 1-to-1 Google ChromeBook program. Younger students have access to computer and iPad carts, and each classroom has a “Tech Tub” containing iPads. A Knott Grant of $89,500 assisted in funding many of the updates.

Through the Quest Program, students can participate in enrichment before, during and after school, and on weekends. Rosanna Rensberger, a middle school foreign language teacher and enrichment coordinator, encourages students’ learning in unique ways, focusing on individual talents and interests.

SJRCS offers learning lunches, where students engage in a subject of interest; special sessions, for both those who are excelling and those who need a boost; and extracurricular activities, including LEGO Robotics, academic quiz bowl, and stock market, geography and history clubs.

Teachers can reserve time in the school’s Maker Space, where students  design and create projects using a variety of media.

Seventh- and eighth-graders make use of a science lab, where middle school science teacher Susan Lakomy involves her students in integrated experiments.

Lakomy’s seventh-graders are involved with Trout in the Classroom, which saw them receive 150-200 trout eggs last fall to raise until their release during a field trip in the spring. Students are trained to work in groups to care for the fish and the environment.

“(Lakomy) inspired me to go into STEM,” said Renata Farrell, a parishioner of St. Peter the Apostle in Libertytown who had her in seventh and eighth grades. “Not only has she taught me about science, but she has taught me about leadership and that girls can have strong STEM leadership roles.”

Lakomy attributes the school’s cutting-edge technology to a very supportive principal and well-trained faculty. She said the environment and technology at SJRCS is: “definitely not stagnant.”

About half of all SJRCS graduates continue on to Catholic high schools; many are accepted into competitive STEM programs.

Farrell was an active STEM participant at SJRCS, taking home first place every year in which she participated in the annual STEM fair. Now a freshman at Linganore High School, she is studying in Project Lead the Way, which integrates engineering into her curriculum.

“I was very prepared for high school and beyond,” Farrell said of SJRCS.

A record four Catholic schools in the Archdiocese of Baltimore received the National Blue Ribbon School of Excellence Award from the U.S. Department of Education, the highest academic honor bestowed upon a school by the U.S. government, last September.

St. John the Evangelist School in Long Green Valley and St. Mary Catholic School in Hagerstown received the distinction for the first time.