Nearly 15 years ago I was selected by Dr. Rodrigue Mortel to go to Haiti for a week and play with kindergarten students. I was 18. Ever since, I can remember I have been highly interested in travel and other cultures; as a young child I learned to read on comic books that were essentially National Geographic for children. So when my mother told me of an opportunity to apply to go to Haiti, there was no way I was not going to try. Haiti is the poorest country in the Western Hemisphere. While a few adults questioned my intent, I was over the moon when I was accepted.

I always knew I wanted a life of being immersed in other cultures, and one week in Haiti only completely confirmed this. The differences between every single child I had the pleasure of meeting in Dr. Mortel’s school, and many of their (born-unto-advantage) counterparts, was something that could not go unnoticed. This would be an observation, and a life lesson, that did far more good for myself than whatever good I did in seven days of playing with these students. 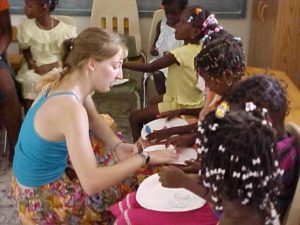 One of the best things I think any parent can teach their child, is what these five-year-old children in Haiti, without even realizing, demonstrated so strongly for me. These kids truly appreciated everything they had, they did not take anything for granted, and were utterly thrilled with the most simple and simultaneously the most beautiful aspects of life; working together, and sharing, and making connections with others.

I have read that if you have running water and electricity, you are the richest 85 percent of the world. How immensely rich are you, if on top of that, you have the ability to have a comfortable home, go to school and university, have a car, take trips, and have access to health and dental care? How many people are unaware that they have been born, sitting on a pot of gold, and yet sit with such apathy? How many even have the audacity to complain? 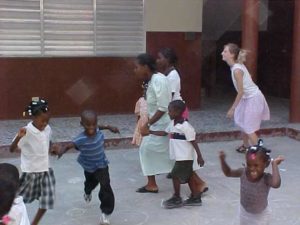 Many people who were born with their basic needs easily met, are living in another sort of poverty. They lack appreciation for what they have, they have too much apathy for what they could do with their lives or for others, and lack community and connection. I suppose you could call this kind of poverty, isolation and depression. In that case, many in developing nations could be far more rich in spirit, and this is what I saw in Haiti. Given the chance for education, a key to open positive and proactive doors for the future, will not go without unparalleled enthusiasm.

I sponsored a student named Tamara soon after experiencing Haiti. She would have been in kindergarten when I was graduating high school. I went to University, finished in four years, and after that I spent five continuous years slowly travelling between four continents. This included more types of experiences in which I saw firsthand poverty, such as a four-year-old, sleeping on cardboard on the street. Seeing these sorts of terrible, gut-wrenching things once again, confirmed to me that once I had experienced firsthand culture shock of poverty in Haiti at 18, that it would stay with me forever. You realize how much improvement is needed in the world, and that you can be of meaningful assistance, to at least part of it. Apathy becomes not an option.

I enjoyed receiving each yearly picture of Tamara as she progressed through school. (I noticed on her report cards that she did quite well, I might add). It is now gratifying and surprisingly weird to realize that Tamara is about to graduate high school and is the same age I was when I first sponsored her.

It is without a doubt, that Tamara will take advantage of her diploma from Dr. Mortel’s school, and will be one of the next strong, positive, contributions to Haiti. This was Dr Mortel’s goal in creating such a school, and he has the blessing of being able to see his hard work come to fruition, with the success of each graduating class, spreading like branches of a tree in which to give back to Haiti. No act of kindness goes unnoticed.

This commentary originally appeared on High Hopes for Haiti.

Abby Taylor participated in a 2003 mission trip to Haiti.