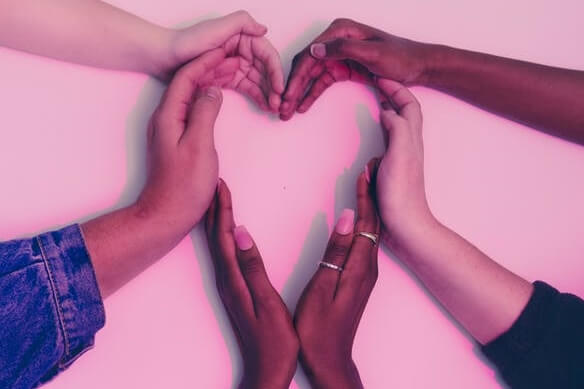 I am a white mamma of four bi-racial children.

One looks white. One looks “in-between.” And two have darker skin like many African Americans.

As my children grew up, there were a few minor racial-related issues here and there involving others, yet nothing major (thank God). I remember in public people occasionally asked me, “Are they your children?” I found that rude. I remember our youngest son in Catholic school being called a word I will not type here. (We addressed it with the principal and smoothed it over with the other family – apologies were said.)

And, brace yourself, this one is bad. In 1996 my then-best friend said to me after our daughter was born with lighter rather than darker skin color, “I’m glad she came out white.”

My now 23-year-old daughter has shared with me how deeply upsetting this ongoing racial injustice is for her. She’s horrified over it, has donated money to one of the related nonprofits to support the cause, and has searched for peaceful protests to attend (she’s in California).

“I worry about Dad, my brothers, my uncle and cousins every day because of stuff like this,” she said. “There are bad people everywhere – black and white.”

She told me she has felt judged many times in her life because of her complexion. She does not like it when people ask, “What are you exactly?”

I’ve heard of many incidents from my black husband as well. He says judgments have been aimed at him during his entire 73 years. A few years ago, he was waiting in the car for our adult kids and me outside an ice cream shop in Florida. A policeman knocked on his driver’s side window to ask him what he was doing there. It was a small parking lot clearly attached to the ice cream shop – what did the police officer actually think??? My husband takes offense to that type of scenario.

One of those judgments aimed at him came from my white Italian parents. How do you think it went over when I began dating a man in 1990 of a different race, culture and religion? (I would need a much longer column to explain that distressing story.) Although it ended happily, and my husband enjoys a great relationship with my 86-year-old mamma (as he did with my late papà), it did not begin well and almost tore us apart. I remember my father asking me, “Can’t you just wait for an Italian!?” I am shocked to this day my husband never held a grudge against my parents for their immoral attitude and disapproval of our courtship – yet he did not. We’ve been married for 29 years.

My papà, God rest his soul, grew up in Highlandtown in Baltimore City. He was a very good man. He had an enormous golden heart. And he was a fantastic father. I am not aware of what he may have experienced, or remember him sharing much about his childhood and young adulthood – but something made him a racist. Growing up, my siblings and I heard his racial slurs. One time he forbade my black friend, Harold, from coming into our house to pick me up as were heading out with other high school friends. He was an Archie Bunker.

Was my dad a product of his era, having been born in 1929 when racism was more appalling than it is today? What exactly did he see and hear between the different races trying to work and cohabitate together in the city? What made him feel and think that way? Did his immigrant parents teach him? I do not know, I will never know, and I wish he was here to discuss it.

Then why didn’t I grow up a racist? We had no black children in our neighborhood; but in high school and college, I had black friends. I had many black friends when I began my career in the corporate world. And then I married a black man. That came with a black mother- and father-in-law, a black brother-in-law, and black aunts, uncles, and cousins. I loved (love) them all. They never judged me for being white and joining their black family. We were (are) one big accepting family.

Each generation learns new ways, new causes, new social scenes, new perspectives. Yet generations also can learn from the ones before them. Thankfully, I looked past what Papà saw and thought.

I did not consciously seek a person of another color, it just happened. Now I think, hmmm, was it a subconscious act against my father’s ethnic opinions? I did not see the color of my husband’s skin when we first met – I saw him. I was attracted to his friendly personality and handsomeness. Our children are gorgeous – four fine adults. I do not think of them as black or white; I affectionately call them “my little brown babies.”

My husband says I will never understand what it is like to be the only black person in a room, that I will never understand what it is like when strangers look at him a certain way – he’s absolutely right. I cannot place myself inside of his skin, nor of our children. In public, people definitely stare at us. Why is that? Is it because he’s a large black man at 6-foot-4-inches and I’m tall as well? Is it because we are a mixed couple with mixed children? Or is it because he’s a local sports celebrity? We simply do not know what is inside people’s heads. Merely because I am the white wife of a black man or have raised four bi-racial children does not make me an expert on “how it feels” to be a minority. I do not know.

Want to hear something almost shake-your-head comical? This has happened many times. When I’m with friends and one is telling a story, and someone in the story (a neighbor, stranger, friend, coworker) is black, they whisper the word. I kid you not. “He’s black,” they’ll say in a hushed tone. I call them out on it – why are you whispering that word??? I can hear you, you know. You do realize I know my husband is African American? I fail to understand why people whisper the word? Is it for my benefit, his benefit, or do they merely have trouble saying it?

I didn’t think to ask my daughter or our sons how they feel about what’s going on currently. She told me it upset her that I hadn’t. I hadn’t because I am white – and it didn’t occur to me that even one of my kids was upset over the issue. I regret that.

When she told my husband and me if she and her boyfriend found a peaceful protest, they would certainly attend. I kind of freaked out. No! Please do not put yourself in danger, dear daughter!

And both my husband and I said, “Sometimes you can’t get out!” (Such awful scenes we’ve seen on the news over the years.) She went and didn’t tell me. I learned of it the next day. Who am I to stand in the way of her belief against black injustice?

Now, it’s ironic the places the universe will lead us to give us a lesson or a new perspective. Last Sunday, my husband and I drove over to sit outdoors with my mamma, who lives in an assisted living center. On the road leading to the building, scores of people were lined up in a peaceful demonstration, holding various colorful handmade signs. We drove past blocks and blocks of protestors. Police were present, too, monitoring the intersection and the crowd. After we parked at Mamma’s building, she hadn’t come downstairs yet, so I said to my husband, “C’mon, let’s join them.” And we did.

We stood quietly along the road, wearing masks, looking around, waving at beeping cars passing by. The event was a representation of a white neighborhood fighting for black people. People of all ages participated. I scanned the line of people, I read their signs, and wished I had one to hold up:

“White silence is not an option.”

“Love is the people’s power.”

“Hate has no home here.”

That’s what I felt. It was moving and emotional. I was thankful to be standing there – with my husband – and understanding our daughter much more.

“I’m glad you found that protest,” she said later. “It is very powerful to be a part of something like this, and I felt that when I marched. We are changing the world.”