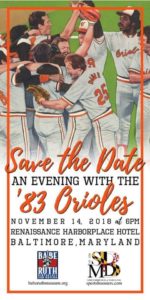 During An Evening With the ’83 Orioles Nov. 14 at the Renaissance Hotel in Baltimore, I was seated next to a man whose face was familiar, yet I could not place. A comical notion coursed through my subconsciousness: “Is that Mr. Bean?”I thought the man resembled the talented British actor and comedian, Rowan Atkinson, of the famed and very funny “Mr. Bean” character.

It wasn’t until we exchanged business cards when I realized my tablemate was Mr. George Weigel, a fellow writer, a Catholic theologian, and one of America’s leading public intellectuals, whose face I remembered from my 2005-2009 tenure at the Catholic Review newspaper – he as a syndicated columnist and I as a staff reporter. I was thrilled to remember Mr. Weigel’s face from his small square headshot next to his byline week after week. (I knew he wasn’t actually Mr. Bean; I often play a little game comparing people’s faces to celebrities.)

In this week’s mail, I opened a large envelope containing an autographed book, which the renowned writer thought nicely to gift us. It was signed to “Suzanne & Ken Singleton with best wishes” and a “thanks ever so much for your good company at dinner. It was an honor to meet you both.” In his Lessons in Hope: My Unexpected Life with St. John Paul II, Mr. Weigel tells the story of his unique friendship with the late pope.

I suppose in whatever career we enjoy, at times we can feel inferior to another human in a similar career. It is natural to make more than celebrity face comparisons.

For instance, we both may be writers, yet Mr. Weigel is the author of more than 20 highly intellectual books. I wrote seven, my best being about the history of Little Italy and my worst discussing 200 Halloween costume ideas.

He is the recipient of 19 honorary doctorates in various fields I can hardly pronounce. My one bachelor of science degree from a local university hangs in a wooden frame in my home office. It’s likely that’s as far as I will get academically.

He impressively has been awarded a Papal Cross. The only cross I own is on an 18k gold chain purchased in Italy.

He was awarded the Gloria Artis Gold Medal by the Republic of Poland. I am not even sure what that is.

His column is syndicated in 60 newspapers around the country; he’s been a contributor to Newsweek, a Vatican analyst for NBC News, and a New York times best selling author. My inspirational weekly e-column has a modest following of 600 readers; my books have sold painstakingly slow, one by one and never in large quantities; and the largest magazine in which I’ve been published was Baltimore Magazine. (And between you and me – I’ve always dreamed of being a syndicated columnist.)

I’ve been to Italy eight times, but I have never met a pope or rubbed elbows with one, let alone the eminent St. John Paul II. And here is Mr. Weigel sitting next to me who penned a 341-page book based on his personal relationship with the man developed over dinner conversations at the Vatican?! (Did you know the pope had a sweet tooth?)

My personal relationship is being married to a former baseball player – Ken Singleton likes sweets, too. As an inspirational speaker, I may not have a list as long as Mr. Weigel’s public addresses – from Pennsylvania to Poland – yet I do have a long list of old baseball memorabilia, such as Ken’s baseball jerseys and dirty old cleats displayed in the workout room in our basement. I once did a book presentation at Enoch Pratt Library in Highlandtown, a neighborhood that included many Polish families, and another in Baltimore’s Little Italy … do they count as international?

Besides my writing career, a baseball life is what I have known for 30 years, enough to feel confident writing the book: Married to Baseball: Between innings with Ken Singleton … Mrs. Singy’s stories of baseball life that have nothing – and everything – to do with the game.

I was intimidated even before I researched Mr. Weigel online to write today’s blog. Now, after learning how prestigious of a writer he is? Whoa. (That deserves some kind of award, cross or medal he hasn’t already earned!)

Yet Mr. Weigel was not attending the Orioles event as an author, columnist, Catholic theologian, speaker, one of America’s leading public intellectuals or a papal pal. The native Baltimorean attended as a baseball fan. (Everyone present was a baseball fan – all 950 seated guests in an enormous ballroom – there to honor the 35th anniversary of the Baltimore Orioles 1983 World Series champions, a team on which my husband played.)

Intimidated or not (and knowing my writing is subpar compared to his), in turn I am mailing Mr. Weigel an autographed copy of my baseball book, along with Ken’s autograph on the O’s event laminated VIP credential attached to a lanyard.

Okay, so he shared a friendship with one of the most popular popes in history. As a good little Catholic girl, that literally wows me. 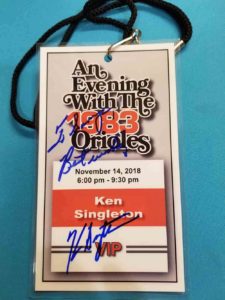 So how about we make a trade, dear George, you know, as they do in baseball? I’ll take some of those wonderful close up and personal JP II papal experiences and trade you for my close up and personal experiences “married to baseball.” I’ll give you Ken Singleton and his good buddies, Eddie, Tippy, Scotty, Dennis, and Al. Maybe even throw in some Boog and Cal. Does that work for you?

No secret I’ve been teasing during this entire blog – everyone realizes that, right? I am a writer and Mr. Weigel is a writer. The only thing to compare side by side is what we write – which are extremely different topics tackled in tremendously different writing styles.

As a devout Catholic, who very much admired Pope John Paul II, I know I will enjoy Mr. Weigel’s book. As well, I trust he will be entertained as a lifelong Orioles fan while reading my 193 pages filled with human-interest, amusing and emotional stories about baseball life, its fans and legends.

Suzanna and George were both featured on the Catholic Baltimore radio program on two separate occasions. Listen to George talk about his most recent work on St. John Paul II here. And listen to Suzanna discuss her Little Italy book here.