Schools in the Archdiocese of Baltimore had plenty to celebrate during Catholic Schools Week, including winning artists, coaches and teams.

Amount of the Knott Foundation grant to Calvert Hall College High School in Towson, which is using the money to upgrade the lighting system that was installed in 1989 at the Marion Burk Knott Center for the Performing Arts. The new system includes stage lighting, wash lights and a digital light board. The grant will cover the installation, setup and training of staff on the lighting system and console. 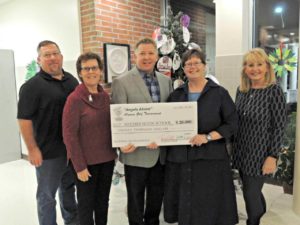 Amount raised by the Jack and Shirley Little Scholarship Fund at Mother Seton School at the Angels Above Golf Tournament Oct. 6. The Littles’ six children, who attended Mother Seton School in the 1970s and ’80s, created the fundraiser to honor the sacrifice of their parents. Over the years, the tournament has raised more than $116,000 in support of the Emmitsburg school. 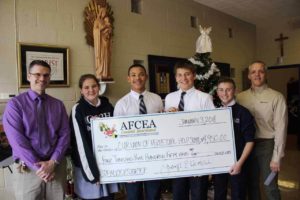 Amount of a grant Our Lady of Perpetual Help School in Ellicott City received from the Central Maryland Chapter of the Armed Forces Communications and Electronics Association (AFCEA) as part of the association’s STEM Kickstarter initiative. OLPH, a National Blue Ribbon School of Excellence in 2016, will use the grant to grow its after-school Robotics Club and form grade-level teams to compete in local robotics competitions, including the Catholic Robotics League of Baltimore. 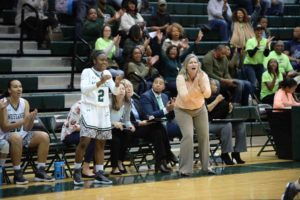 Basketball coaching wins at Stevenson University achieved by Jackie Boswell Jan. 13, when the Mustangs beat Alvernia University, 72-32. In her seventh season at Stevenson, Boswell is a graduate of Archbishop Spalding High School in Severn, and previously coached at the former Seton Keough High School, which she guided to the Interscholastic Athletic Association of Maryland A Conference title in 2009. 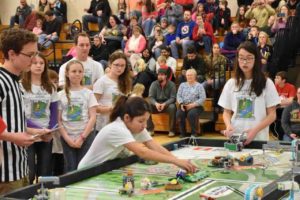 Students on St. Thomas More Academy in Middletown’s winning robotics team. The “Defensores Aquae” (Latin for defenders of the water) included eighth-graders Cecilia Manalo and Laura Neumark, sixth-graders Barbara Butz and Brooke Renninger, and fourth-graders John Fernandez and Mia Matthews. They took home the Champion’s Award of the First Lego League “Roar of the Robots” competition, and moved on to the Maryland State Championship at the University of Maryland, Baltimore Campus Feb. 24. The award is given to the top team across three areas of the competition: robot game, core values and project. The students created a special type of plastic to create a working prototype that solves an agricultural problem. 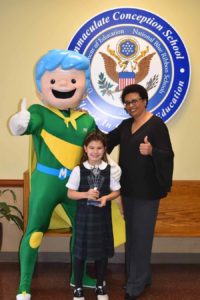 Elementary schools in the archdiocese which won $5,000 in BGE’s Natural Gas Safety Contest. St. Joseph School in Fullerton, St. Stephen School in Kingsville and Immaculate Conception School in Towson (winning artist Joslin Linz, pictured with Ingrid D. Woods,  governmental and external affairs specialist for BGE) earned prizes in the annual competition, which seeks to teach children how to recognize a natural gas leak, and what to do to stay safe. Students participating in the event created illustrations of Captain Mercaptan (named for mercaptan, an additive which many utilities companies use to give natural gas a rotten egg odor, making it easier to detect).

Student from Archbishop Curley High School in Baltimore to be inducted into the National Society of High School Scholars, with the addition of Nicholas Andrews, a member of the class of 2018. According to the school’s administration, Andrews is believed to be the first Curley student accepted into the society, which numbers 1 million members in 160 countries. Andrews previously attended St. Ursula School in Parkville.