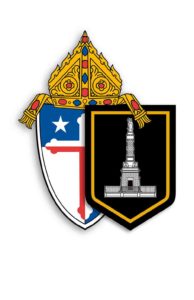 On the second Saturday of the month, the people of St. Peter Claver Parish, under the direction of Greer Dorsey, provide a meal and fellowship for between 150 and 200 people in need, under the banner of Harper’s Helpers.

What did the late Josephite Father Henry Harper do to inspire Dorsey?

“Father Harper always provided food to the community,” Dorsey said. “People would ring his doorbell, he would fix them a sandwich, have them sit down with him and talk. He had a gracious attitude and kind spirit.

“When he passed away (in 2011), that left a hole in the community. I wanted to start the ministry, to continue that aspect of what he provided, food and a listening ear.”

Dorsey launched Harper’s Helpers in 2012, four years after her graduation from Hampton (Va.) University, and three years before the neighborhood became a national flashpoint after the death of Freddie Gray Jr. from injuries sustained while in police custody.

“St. Peter Claver has always been a pillar in the community,” said Dorsey, who works in state government. “We didn’t necessarily shift our ability to serve, we just continued what we were doing. We stayed grounded, and dug our feet in deeper, became even more of a presence.”

In addition to a meal, clothing “and whatever other donations we receive,” according to Dorsey, guests in Father Harper Hall also encounter the presence that was his trademark.

“It was January or February, 2018, and we were serving breakfast,” Dorsey said. “I heard a man say, ‘I haven’t had breakfast in a long time.’ Something like that makes you pause and think about all of the things that you’re privileged to do and partake in, and that you take for granted.”

Dorsey attended John Paul Regional School in Woodlawn and Father Charles Hall, on the campus of St. Peter Claver, for some of her elementary schooling. She was baptized at St. Gregory the Great, but raised at St. Peter Claver.

The parish is ministered by the Josephites, who were founded in Baltimore in the aftermath of the Civil War to serve black Catholics.

Father Harper wasn’t the only member of the order to help form Dorsey’s faith. She was in youth groups led by the late Josephite Father Joseph Del Vecchio to World Youth Day 2002 in Toronto, and on a pilgrimage to Portugal, France and Spain in 2008. In 2006, Father Del Vecchio stepped in to help when Dorsey’s family had trouble paying her first-semester tuition of her sophomore year at Hampton.

“I’ve learned a lot from Father Ray; he is one of the blessings of my life,” Dorsey said. “We can talk about anything. I have learned a lot about patience from him. He deals with a lot of situations that require patience, kindness and grace.”