The Archdiocese of Baltimore makes its presence known every year at the March for Life in Washington, D.C., and 2019 is shaping up to be no exception.

This year’s theme, “Unique from Day One,” highlights the concept that pro-life is pro-science. It has particular resonance in a region that includes some of the world’s premier medical and scientific institutions.

Natasha Wilson, the coordinator of education and outreach for the archdiocesan Office of Respect Life, attended her first March in 2016, the same year she completed her doctorate in chemical and biochemical engineering from the University of Maryland, Baltimore County.

She had entered the Catholic Church during the 2015 Easter Vigil, what she described as a conversion of not only her faith.

“I sensed a shift in priorities for myself,” Wilson said. “I recognized that the problems that we have are not necessarily technical, but theological.”

Her conversion coincided with switching from being pro-choice to pro-life. That led her to ask the Lord how she could serve the cause. Wilson knew she wanted to work in the church, and jumped at the chance to join the Respect Life team.

Wilson, who also earned a bachelor’s degree in chemical engineering from UMBC, worked five years in the chemical industry as a chemical engineer in research and development, and manufacturing. She said that scientists are often pro-choice, but that from a rational standpoint, they should be able to understand the pro-life stance.

“If you’re honest as a scientist and you really open your eyes … then you will know the truth,” Wilson said. “Science is a grace from God allowing us to be able to understand his creation.” 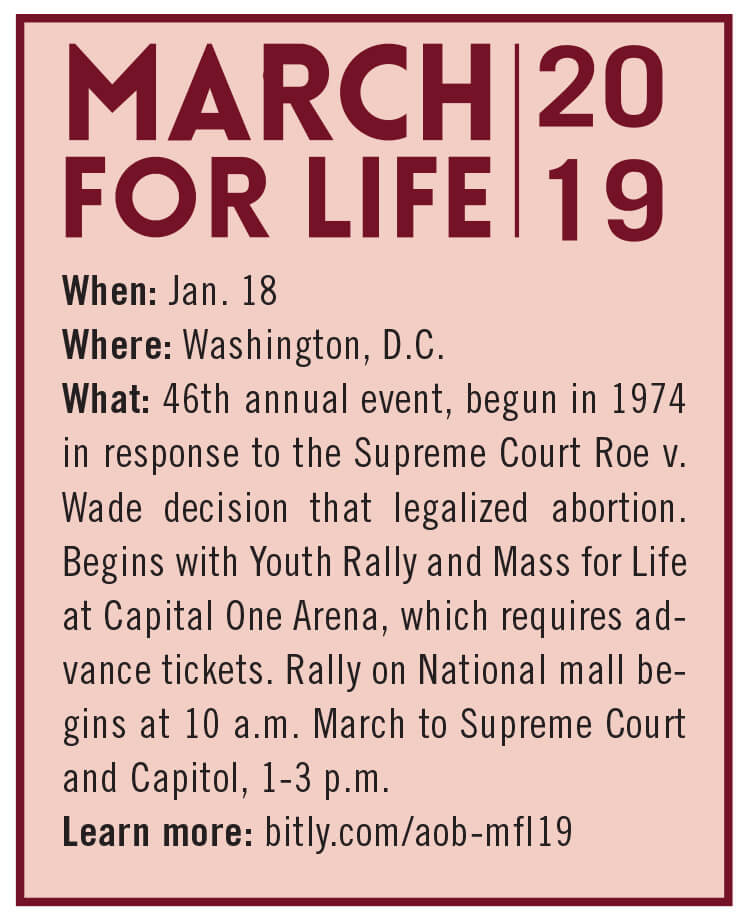 Faith, she said, does not exclude science, which is only one way to view life. That’s among the reasons she takes note of March for Life themes.

“Everyone’s heart is touched by something different,” Wilson said. “Reality is complex. Reality is not one-dimensional. … The different themes are hopefully bringing all the different aspects of life into focus.”

Another scientist committed to the March for Life is Zachary Robinson, 28, a physicist at the Johns Hopkins Applied Physics Laboratory in Laurel and parishioner of Our Lady of Perpetual Help in Ellicott City. He is attending for the seventh time.

“Babies in the womb are human beings,” he said. “All human beings have dignity and have a right to life.

“A theme that focuses on scientific support of life being human in the womb is important because it helps reassure us what can be known by the light of natural reason … and help reaffirm what the church teaches. … It’s something we can know from natural law.”

“The living organism, even though it’s inside of the mother, still is going to be of the same nature as the mother,” he said.

Wilson encouraged those interested in the March for Life to check with their parishes, many of which sponsor buses. For those who can’t make it D.C. – and even for those who can – she also suggested the Jan. 13 Life is Beautiful Mass at the Basilica of the National Shrine of the Assumption of the Blessed Virgin Mary in Baltimore, where pilgrims can receive an episcopal blessing.

“It’s important that we witness to our faith, and part of that faith is that life is to be protected,” she said. “The world is watching – we (can) let the world know that we truly believe what we say we believe.”