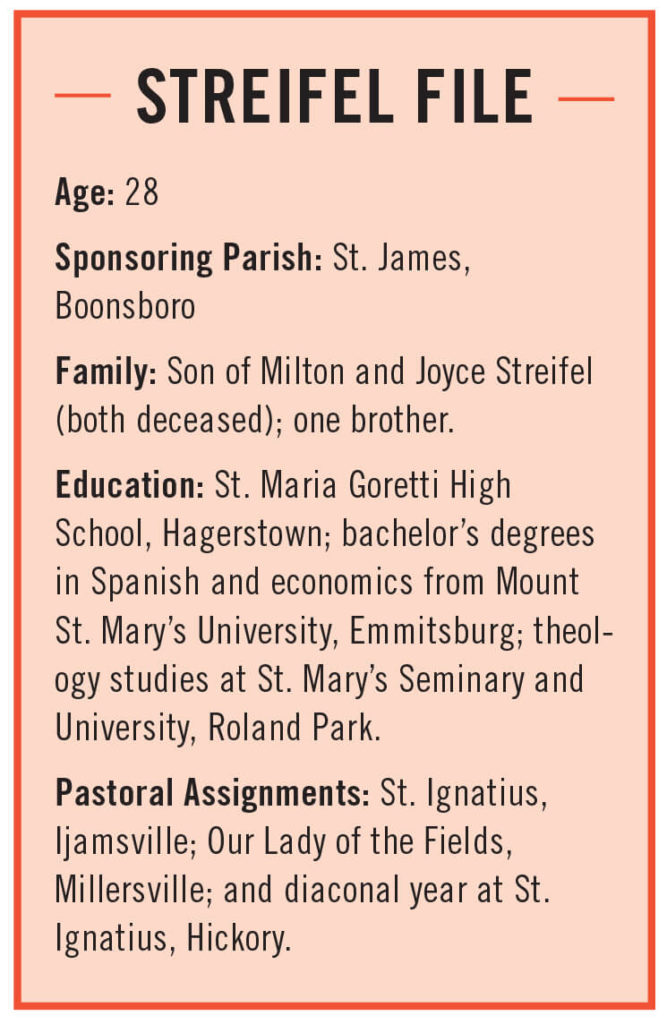 Like many boys growing up in a Catholic family, Deacon John J. Streifel gave some thought to becoming a priest, but it wasn’t until toward the end of his college years at Mount St. Mary’s University in Emmitsburg that he gave more serious, mature thought to it so he could see himself stepping into the role.

After graduation, he spent a year working in administration for a home-improvement company while discerning a call to the priesthood.

Learning more about his faith was an ongoing process in college. Growing up, a lot of the activities of his family involved parish life. Later, when he was on his own, he strayed in and out of the path of following Christ until “this greater discovery the Lord led me on,” Streifel said in an interview a few weeks before his ordination to the priesthood.

There weren’t any “deal-breakers” during his formation – just the normal challenges that are part of the process. He admitted to being “put out of my comfort zone” the first time he went into a hospital to provide ministry.

“All that allowed me to grow and to mature,” he said, noting that nothing caused him to lose hope. He gave credit for that, first to God, and then to the faculty and formators at the seminary who were “helpful, guiding and have helped navigate me through some of those challenges.”

A personal challenge came when his mother Joyce passed away suddenly while he was in the seminary. He said he hesitates to call it a blessing in disguise but that he hopes he processes well and reflects on the sorrows, which result in turning that experience into “greater gifts that hopefully I have to offer in ministering to God’s people,” Deacon Streifel said.

“If anything, these difficulties have allowed me to, I hope, be more of a compassionate minister, someone who’s much more empathetic to what people are experiencing.”

He said the priests he has worked with during his pastoral assignments have provided examples of how to be a faithful priest – “and that’s different for everybody,” he said. That’s been inspiring to see, along with learning the nuts and bolts of daily parish life.

“I really haven’t had what I term a bad pastoral experience; I’ve loved all of them,” Deacon Streifel said. “They’ve taught me so much and I think they’ve prepared me probably as well as I could be prepared at this point, on the cusp of priesthood.”

He loves to study, so he enjoyed all his classes at the seminary, especially Scripture studies. The professors opened up the Scriptures for him and he hopes to take that deeper devotion to God’s word to his parishioners in his preaching.

All of that has brought him to this point where he doesn’t know what to expect from the ordination liturgy itself. He knows he will be filled with hope and gratitude.

“In the end I’ve been able to come to this point, this graced point, where the Lord has made clear to me this is my vocation,” Deacon Streifel said. He knows life as a priest will have difficulties and challenges, ups and downs.

“But there’s great fulfillment in following Christ in this way. I mean, what more could I ask for in life?” he said.

Retired from the Navy, Deacon William Keown is excited about new role as priest