Despite a day of blistering heat, members of St. Bernardine Catholic Church in Baltimore, weren’t dissuaded from celebrating a joyous occasion July 24.

Instead, passionate singing was heard from across the street, people with their phones and cameras snapping pictures here and there, smiles greeted each person who walked in the door, “welcome” as they took the hands of strangers and friends they had seen recently. And welcoming indeed they were.

But why were the members of St. Bernardine so cheerful this past Sunday?

It started five years ago, during the fall of 2017, when St. Bernadine inaugurated a capital campaign, “Destined Under the Dome,” to restore the many needs of the church. With the help of the Archdiocese of Baltimore, the campaign also addressed other needs beyond the parish, including St. Frances Academy, Holy Angels Catholic School, Catholic Charities and clergy retirement.

Fast forward to July 2022, and the church has restored its front steps, stained-glass windows and roofing, along with its heating, ventilation and air-conditioning system – which was a great deal of help to keep cool during this heat wave.

However, the most exciting project was the restoration of the dome for which St. Bernardine is known. A beacon to those far away, lovingly called “the home under the dome” or “domos – Latin for home, our home.” as Monsignor Richard Bozzelli, pastor, pointed out. It was lit brightly thanks to its new paint job that will stand the test of time – or the test of Maryland’s unpredictable weather.

About 150 people came to see the finished dome, and to listen to its bells, which chimed the good news: “Jesus is here!”

The Holy Spirit was felt in the space, moving between the pews as congregants raised their hands in applause and raised voices in song, grateful to be able to participate in the celebration. Children and grandparents eagerly waited for Baltimore Archbishop William E. Lori to sprinkle holy water and bless the tower. He, too, greeted everyone with the same welcoming smile and handshakes the congregation offered him.
“We are so excited to see the finished project, thank you for coming,” said Joel Williams, the parish’s facilities supervisor, as he stood by the door eager to answer any questions. “We hope to see you again.” 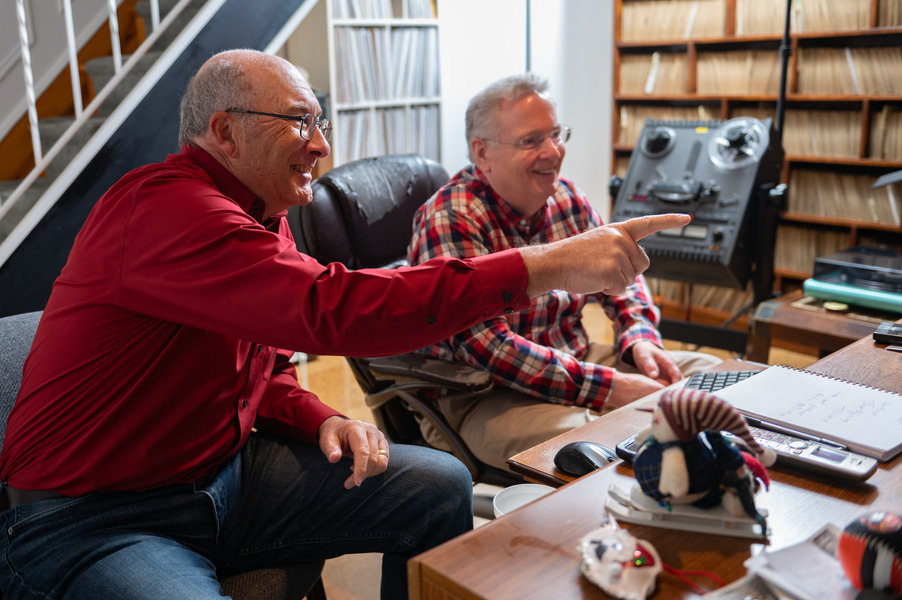 A native of Annapolis, Mitzy has been with the Catholic Review since 2022. As the Social Media Specialist for both the Archdiocese of Baltimore and the Catholic Review, she is usually looking for the next viral click, or trying to convince her cat it’s not dinner time yet.

Mitzy attended Maryland Institute College of Art in Baltimore, and has a bachelor’s degree in fine art.