My husband and I have turned to St. Joseph many times for help with jobs and houses, of course. I’m also inspired by him as a father to a child who’s not his biological child, but who assumes his role with quiet strength.So, when I realized I could fit Mass into my day on St. Joseph’s feast day, I was excited. Working for a Jesuit university has its perks, and being able to go to a weekday Mass now and then is a big one.

The Gospel of Matthew told the story of how Joseph found out Mary was expecting a baby.

“Joseph her husband, since he was a righteous man, yet unwilling to expose her to shame, decided to divorce her quietly.”

How many times have I heard that reading? Many. But the homily introduced a new concept to me. Our priest told us that you might think that Joseph thought Mary had done something wrong and was now pregnant, but that—in fact—there is another way to read that passage.

There is a long and pious tradition, he told us, that Joseph actually knew God was at work in Mary’s life, and that he was scared that something truly wonderful was about to happen. In that approach, it would have been more likely his humility and his sense that he wasn’t up to what God had planned that made him hesitate and want to step away.

That turns the whole story on its head for me. And that seems so like St. Joseph to react that way—much more like him, in fact, than to think he would not have faith in the Blessed Mother.

Ah, St. Joseph. He’s so saintly, but also so human. 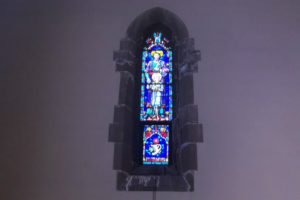 What a natural fear. If you’re not at least a little afraid to become a parent, are you actually ready? And if you think you can easily be the foster father of the Son of God, are you really the right person?

Thinking of the story in this way, perhaps we can also ask ourselves whether there are times we turn away from opportunities not because we think they are not good for us, but when we think perhaps they are too good. Maybe those are the opportunities that seem to ask too much, require a holiness we aren’t capable of, and place us even more directly within a very specific piece of God’s plan.

Yet look at St. Joseph. He wasn’t born without sin. He was a carpenter with what seems to have been a fairly ordinary life. He doesn’t seem to give the resounding yes that Mary gives. In the Gospel, it feels more that he doesn’t quite say no. But his love is powerful—and it’s something we can strive to imitate.

“Joseph’s faith in Jesus was visceral. It was human. It was blessedly uncomplicated. It was life-giving,” said Rev. Steve Spahn, S.J., during his homily. “We could all take a page out of his book when we make our faith more complicated than it needs to be. Joseph loved his boy. Let us love the Lord.”

Love the Lord. It sounds so simple.