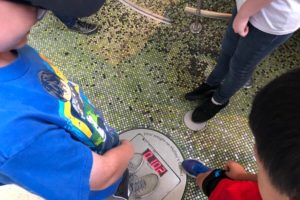 My sister Maureen and her four children live about 40 minutes north of New York City, but when we visit them, we rarely go into the city. Last weekend when we drove up to see them, though, we decided—somewhat spontaneously—to head into Manhattan to go to the American Museum of Natural History.

Our sons have seen Night at the Museum, which is set there, so that added to the fun of the whole experience. My husband was most excited to see a planetarium show called Dark Universe, and we all loved it.

The whole experience was so educational that my head was swimming just trying to process it all. And we barely scratched the surface of the museum. 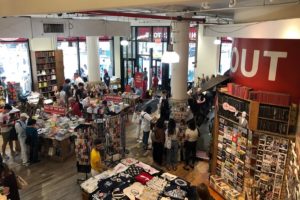 After the children were thirsty and tired of walking, we knew the trip had been a success. We stopped at a food truck to get drinks and a giant pretzel and then drove to the Strand Book Store so the children could walk more. Maureen and I had both been to the Strand at different times, but neither of us had taken our children, and John had never been there.

The Strand is a bit overwhelming in the best possible way, and I could have spent hours there if I hadn’t been so busy counting heads and watching children happily climb ladders to reach books on the higher shelves.

I managed not to buy anything, which was either a great disappointment or a marvelous victory, depending on your perspective.

We started our visit by driving into the city along the Hudson River and drove home along the East River. We loved seeing all the industry and activity and busyness of the city. Driving in New York City is a billion times easier and more pleasant than driving in Washington, D.C., where I invariably get lost. I even found a parking space on the street near the Strand. It makes me wonder why we don’t visit Manhattan more often. 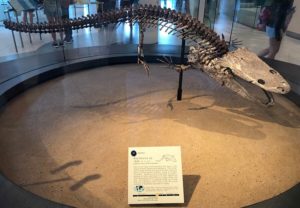 A highlight of our trip to the American Museum of Natural History was seeing the skeleton of the dinosaur that bears our name, Buettneria. Buettner is a common enough name. It’s the German equivalent of Cooper, and it means barrel maker. So, I have no reason to believe that the Buettner who found the bones was related to us.

Still, it’s exciting to see a dinosaur with your name. And I knew the skeleton was there. I had seen it once before about six years ago, but John wasn’t with the boys and me on that trip. So, we took a photo of all of us with the dinosaur, and I announced we were ready to order our Christmas cards.

Speaking of which, our older son insisted on bringing his trumpet with him to visit his cousins, so they could make music together. My 10-year-old nephew had already received his sheet music for a Christmas performance, so three of the children played Christmas music in a special performance in my sister’s living room.

I think it’s somewhat telling that, when we were leaving, we left half of our clothes behind at my sister’s house, but we remembered to bring the trumpet. 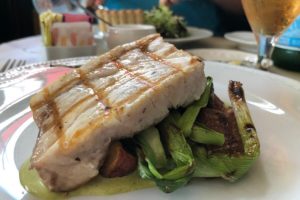 It really has felt like Christmas in July because John and I managed to use our Christmas gift from my parents—a gift certificate to Petit Louis in Baltimore’s Roland Park neighborhood.

It’s one of our favorite spots, and we go together very rarely.

We hired a sitter, so we could go for lunch and talk and enjoy our time and some delicious French food together. I can’t remember the last time we went on a date, and it was such a treat. 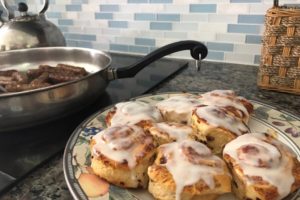 When I’m the only aunt visiting with my nieces and nephews, I try to make an impression. So, I woke up early and cooked turkey sausages and cinnamon buns for breakfast and waited for the children to wake up.

The first children to arrive in the kitchen were mine, and they sprang into action, enjoying every bite. Luckily, one of the cousins managed to make it in time to have a taste. But the others—who are older than our two sons—all slept in.

I’ll have to come up with a different plan if I’m vying for Favorite Aunt of the Day. 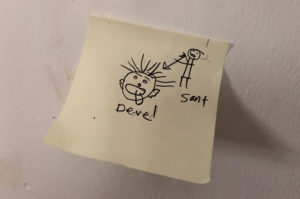 Sometimes I think I’m not doing a great job with faith education—and we could, of course, always do more.

Then our younger son takes a post-it and draws a picture of St. Michael defeating the Devil and sticks it to the wall. He even did a good job sounding out “saint” and “devil,” neither one of which he’s learned in school.

You never know which stories and what information are staying with your children. But something must be sinking in somehow.