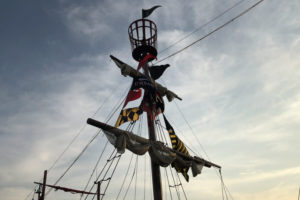 We do plenty of fun activities with our children, but sometimes I forget that there’s a whole world of attractions in downtown Baltimore just waiting to be explored.So the other night when my husband mentioned a colleague had invited us to join a group for an evening ride on a Baltimore pirate ship, I was excited. So were our children.

By the time we reached the dock and checked into Urban Pirates, we were all hungry, and we had about 15 minutes before we were going to board. So we ordered some sushi from Nanami Café and ate it while waiting to board the Fearless. 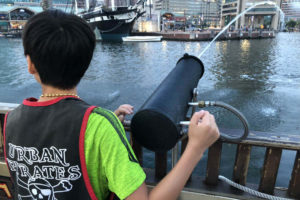 What could be more fun than eating sushi on the water in Fell’s Point on a summer evening?

We were about to find out.

We boarded the ship, where we each received a pirate’s vest and a name. I was “Rotten Rita.” We met the crew and set off on our journey around the harbor.

The sun was sinking in the sky, and the temperature was absolutely perfect. One of the pirates brought out a bottle of rum—since it turned out it was a BYOG (G = Grog) cruise, but we didn’t even need grog to enjoy the evening. 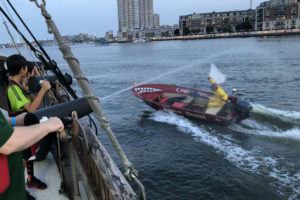 We were too busy talking with our fellow passengers, enjoying the music, playing Hot Potato with a coconut, and trying to limbo under a pole.

From the moment we stepped aboard, our boys couldn’t wait to blast the water cannons, so they were thrilled when the ship was under attack from an enemy pirate. They blasted him with harbor water until he waved a white flag to surrender.

My favorite part of the journey, though, was seeing Baltimore from the ship.

We don’t get out on the water much, much to the chagrin of the 8-year-old fisherman in the family, and downtown Baltimore has really been transformed since the last time we were on the water—which might have been almost 10 years ago now. 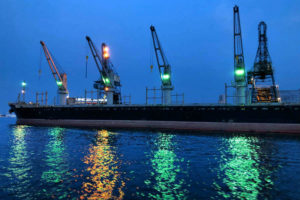 I couldn’t get over how elegant the Pendry looked and how many people were hanging out at the Sandlot—when did that space even open?

I was struck by how enticing Baltimore looked from the ship. I found myself thinking that the music on the ship seemed to match the vibrancy of the city around us. I could have ridden around on that ship all night.

But the enemy pirate had been defeated by our water cannons, and the grog was likely running low. The pirates had to be tired from their day of piracy.

And every good thing—even a trip on a pirate ship—must come to an end.

But we’ll hold onto the memories of a beautiful evening of piracy for quite a while.