One of our sons has eaten almost all of the chocolates in his Advent calendar. My other son keeps forgetting to eat his and falls behind. Still, Christmas comes at the same speed no matter how quickly or slowly you open those doors.

I’m not opening any doors quickly here. We haven’t put our Christmas tree up, I’m not even sure what shopping I have left to do, and my Christmas cards have been ordered but are still on their way. Don’t even ask me how I’m doing with the grandchildren calendar I’m supposed to be creating for my parents.

The good news? I’m not stressed about any of it. Everything will get done. If it doesn’t get done, it didn’t matter.

I’m at peace. In fact, I might be too at peace if I’m ever going to get anything together.

Or maybe it’s just the peace of someone who’s counting on two-day shipping to save the day.

Even without Christmas, December is full around here as we celebrate the anniversary of the day we met our older son in China and then—a few days later—our younger son’s birthday. We’ve just celebrated both of those, and I’m—gasp!—now the mother of a 12-year-old and a 10-year-old.

It’s funny how quickly the children grow when I don’t feel I’m getting older.

During this time of year, I always find myself thinking more than ever about our children’s birthparents—the people who love them on the other side of the world. I am so very blessed to be the mother of our sons, and my heart is just filled with gratitude and awe. 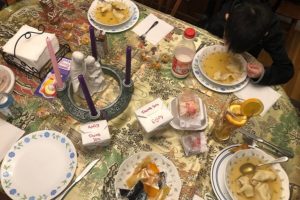 Our older son chose to order Chinese food for his “Gotcha Day” dinner. We had a fun dinner, just the four of us, at home. I wondered whether I had ordered enough food. Then it arrived in a huge box, and there were seven fortune cookies inside. I always figure the fortune cookies are a good gauge of how much we ordered.

The restaurant doesn’t realize each boy wants three servings of won ton soup. But we did have plenty of food left over for the next day.

Earlier this fall our 10-year-old started playing the trumpet. Since he had only had a handful of lessons, I was really unsure what he would play at his concert this week. I had heard him practicing, and I couldn’t figure out what songs he could play.

Then we went to the concert. The band teacher announced that the children had had about six hours of time in the classroom, and that the first hour was spent learning to open the instrument cases. They ended up playing some warm-ups and a few very simple tunes. The most complicated was “Hot Cross Buns,” which we listened to twice on different instruments.

The children were all dressed up in their fancy clothes—our son was in a tuxedo jacket and had a new pleated shirt and pocket square as early birthday gifts. They were so proud and poised on the stage. The whole concert was a little over 30 minutes, and it was magnificent. 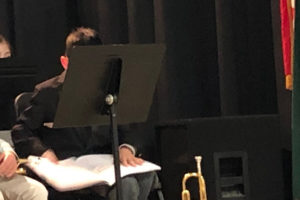 We couldn’t see our son well at all from our seats. He was on the exact opposite side of the stage.

But our friends were sitting in perfect sight of him and captured his performance beautifully. I was able to do the same for her son.

We will strategically sit on opposite sides at all future concerts. 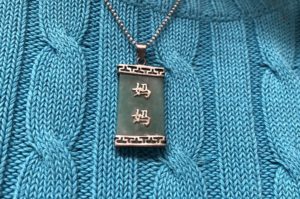 Our sixth grader is taking Chinese at school. We don’t often hear what he is learning. I know the teachers want me to check grades constantly online, but I believe it’s healthier to look less often.

The other day I was wearing a necklace a friend bought for me while she was in China adopting her daughter. He has seen me wearing it, but probably not since he started studying Chinese.

“What does it say?” I asked him—worrying that maybe the Chinese characters don’t say what I have thought they said for years. 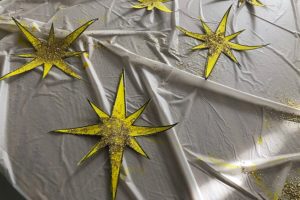 We’re having a live nativity in our parish this weekend. Our fourth grader volunteered to serve on the stage crew. I was happy he wanted to help, especially since I was on the stage crew for plays in high school, and I always enjoyed it.

As it turns out, he’s going to hold the star.

I can’t wait to see him in action. And I hope he brings back lots of fun stories about working with the live animals. Will he get to chase a chicken? Milk a cow? Nudge a donkey onto the stage? Being on the stage crew for a live nativity seems like an incredible stage crew experience.