Jaime Bramble Schell has known Augustine Miceli, Sr., for years as a dear family friend. When he was visiting her parents this past May, he noticed a collage Jaime had made hanging on their wall.The Calvert Hall College High School math teacher couldn’t stop talking about it.

So, Jaime, knowing that Miceli planned to retire at the end of the school year, offered to make him a collage of his own that would celebrate his love for Calvert Hall. Her dad told her there was no need to rush on the project. She would have all summer to work on it.

That weekend, however, Miceli was taken to the hospital with a low blood platelet count. He was diagnosed shortly afterward with leukemia.

Finishing the piece for her friend became a matter of great urgency for Jaime. 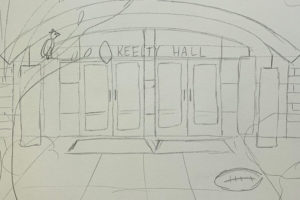 “I’ve never wanted to create something so much,” says Jaime, who is the mother of 5-year-old twins. “I hired an extra babysitter. I stayed up until 3 a.m. I worked in the mornings before drop-off and in the spare few seconds while the kids were finishing dinner and getting ready for bed.”

“Unfortunately, I didn’t get the chance to present it in person, but my parents gave it to him—and much to my happiness he was awake and alert and completely thrilled when he received it,” she says. “He had a mountain of cards and gifts from all the hundreds—if not thousands—of people who had been inspired by him over the years. It meant so much to me that he now knew I was among them, even though I never had him as a teacher.”

Miceli passed away June 29 at age 86. And it means so much to Jaime that she was able to connect with him over this piece of art.

“He left earth knowing that he had changed so very many lives for the better over the course of a 60-year career in teaching and coaching. And that’s what we focus on, because that is truly extraordinary. But he also changed my life, just with the power of a few kind words,” she says. 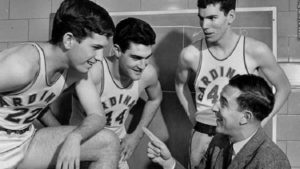 A graduate of St. Pius X in Towson, Md., where we were classmates, as well as Maryvale, Notre Dame of Maryland University, and University of Pennsylvania, Jaime has known Miceli for years. He taught her dad, Frank Bramble (on the left in the picture), algebra and coached his basketball team at Calvert Hall in the ’60s. Over the past 20 years or so, the Brambles and Micelis had become very close, traveling together and having weekly dinner dates.

“It’s funny, I always thought of Augie as one of my dad’s dearest friends. I never thought about him in terms of what he meant to me. I had always admired him—not only was he a teacher and a coach, he was also a Citadel graduate and a veteran,” Jaime says. “But—and this is a little embarrassing to admit—those things that I admired are the very same things that made me especially shocked to learn that he was a fan of my artwork.”

Jaime creates collages out of scraps of paper that might normally be tossed in the recycling bin—leftover children’s artwork, travel souvenirs, wedding ephemera, programs, and ticket stubs. She created the collage for Miceli using watercolors, cardstock, and newsprint paper. She shares her work and insight into her creative process on her Instagram page. 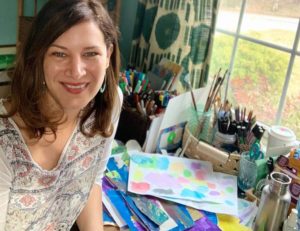 “My pieces are very intuitively made, often whimsical and playful. I’m about as right-brained as they come. And Augie was about as left-brained,” she says. “So, at first it seemed like a disconnect that someone like him would be interested in my work, but I soon realized that that thinking was doing a disservice to both of us. That was the revelation that drove the project and made it so special to me.”

As Jaime reflects on what Miceli meant to her, she is so grateful that she was able to share a piece she created for him.

“The past few weeks have proven to me that seemingly simple words of kindness and encouragement truly do change lives, and that often it’s the people you think you have the least in common with who can totally shift your entire perspective. Also, life is so, so fragile. If someone has touched your heart or inspired you in any way, don’t be shy—and let them know how much you appreciate them as often as you can.”