Father Francis X. Callahan, whose vision ranged from sharing the ideals of Vatican II among his fellow priests to shepherding St. Margaret Parish in Bel Air through its boom decades, died July 6 at Stella Maris in Timonium.

Six weeks after celebrating his 80th birthday, he succumbed to cancer.

Born in Baltimore, Francis Xavier Callahan was raised at St. Bernardine Parish and attended its parish school. He attended St. Charles Minor Seminary and Mount St. Mary’s Seminary in Emmitsburg, where he left an impression on an undergrad who would later be on his staff at St. Margaret.

“He was in the seminary when I went to the Mount,” Deacon Patrick Goles said. “He was a great intramural football player, tough as nails.

“He was a hard-nosed pastor, too. He knew what he wanted. Do the right thing, and let the chips fall where they may. That’s how he lived.” 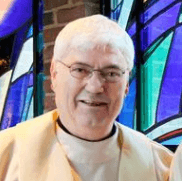 Together with Paul Purta, then a Sulpician priest, Father Callahan led approximately two dozen retreats for priests around the U.S.

“We were among the authors of a small book, ‘The Spiritual Renewal of the American Priesthood,’” Purta said. “The retreats were based on Vatican II. Frank is a masterful leader; he had a way with group dynamics. We were bucking against men who were accustomed to a quiet retreat, and he got them talking.

“The whole collegial thing was in the air.”

When the Jesuits left Corpus Christi Parish in Bolton Hill, he became a co-administrator in 1976 and then its pastor in 1981.

The parish placed women in leadership roles, including Therese Wilson Favors as director of evangelization. She went on to lead, for nearly two decades, the archdiocesan Office of African American Ministries.

“He had a special heart for the vulnerable,” Favors said. “He could engage businessmen and theologians to work for justice for the little guy. I thoroughly enjoyed working for him. He let you grow where you were planted.”

At St. Margaret in Bel Air, Karen Saccenti went from school parent volunteer to parish bookkeeper to the title Father Callahan gave her, assistant pastor, one she still holds under the current pastor, Monsignor Kevin Schenning.

“Father Frank was always concerned about the poor, and about women’s roles in the church,” said Saccenti, a parishioner since 1974. “We didn’t have girl altar servers when he arrived; that changed. He encouraged eucharistic ministers, and was very strong on lay involvement. He started small faith-sharing groups that are still going on here.”

Father Callahan was the longest-serving pastor in the history of St. Margaret, which opened in 1905. He led it from 1986 to 2006, when the population of Harford County grew by 50 percent and the rolls of the Catholic church in the county seat increased from 2,500 families to more than 5,000.

“Harford County, and Bel Air in particular, were seeing loads of new houses, and loads of new Catholics,” said Monsignor G. Michael Schleupner, who succeeded him as pastor. “Father Callahan responded in a way that allowed the parish to keep pace.”

When Father Callahan arrived, the parish school was struggling. A decade later, the archdiocese opened St. Mary Magdalen, a mission to the parish. After students swelled the existing space at St. Margaret School, its middle school moved to the mission campus in 2001.

“That was a great move,” Monsignor Schleupner said, describing others. “On the main property at St. Margaret, he built the parish center, and purchased a neighboring home. We converted it into a youth center, where the kids could just come and hang out.”

Father Callahan made his people look beyond their own faith community.

“He took an ecumenical approach,” Saccenti said. “He worked very hard to establish a homeless shelter in Harford County, and managed to get our neighboring parishes working toward that end.

“We used to rotate that shelter among the churches. It was so much trouble that first year, but when I asked Father Frank if we could keep it going, we housed it as the mission (St. Mary Magdalene), spring, summer and fall.”

Monsignor Schleupner said that the “clear center of his ministry, and his own spirit, was the Eucharist.”

To that end, Deacon Goles said that Father Callahan had “a vision of making St. Margaret a very welcoming place.”

In retirement, he served the community of St. Michael at Aberdeen Proving Grounds, and chapels in the Edgewood area.

Saccenti said that St. Margaret Parish was asking, in lieu of flowers, that “Those who desire may send contributions to your parish for their specific needs.”