The Orchestre d’Harmonie de Saint-Omer will present a concert April 12, 7 p.m., at the Basilica of the National Shrine of the Assumption of the Blessed Virgin Mary in Baltimore to celebrate 300 years of Franco-American cooperation and history.

The orchestra comes from the region of Saint-Omer, in northern France, where Archbishop John Carroll, first bishop of Baltimore and the first Catholic bishop in the United States, attended the School of the English Jesuits when he was a boy.

John’s brother, Daniel, was the first in the family to attend the school, followed by John and their cousin, Charles Carroll of Carrolton.

The Saint-Omer Wind Orchestra’s visit to Baltimore as part of a U.S. tour and continues the ties that have been developed between its namesake town and Maryland. Special guests accompanying the touring orchestra will be Saint-Omer Mayor François Decoster, vice president in charge of culture for Region Hauts-de-France, and Edouard de Lencquesaing, president of the Saint-Omer Foundation for Transatlantic Values.

The orchestra, conducted by Philip Le Meur, is composed of both amateur and professional musicians, mostly coming from the local music academy. The group has received a number of awards in local, national and international venues, including the gold medal at the 2017 International Competition of Orchestras in Kerkrade, Netherlands.

The 72 musicians will play an original and varied repertoire to commemorate the long historical ties through the Jesuits and honor the relationship with the Archdiocese of Baltimore and Saint-Omer County. 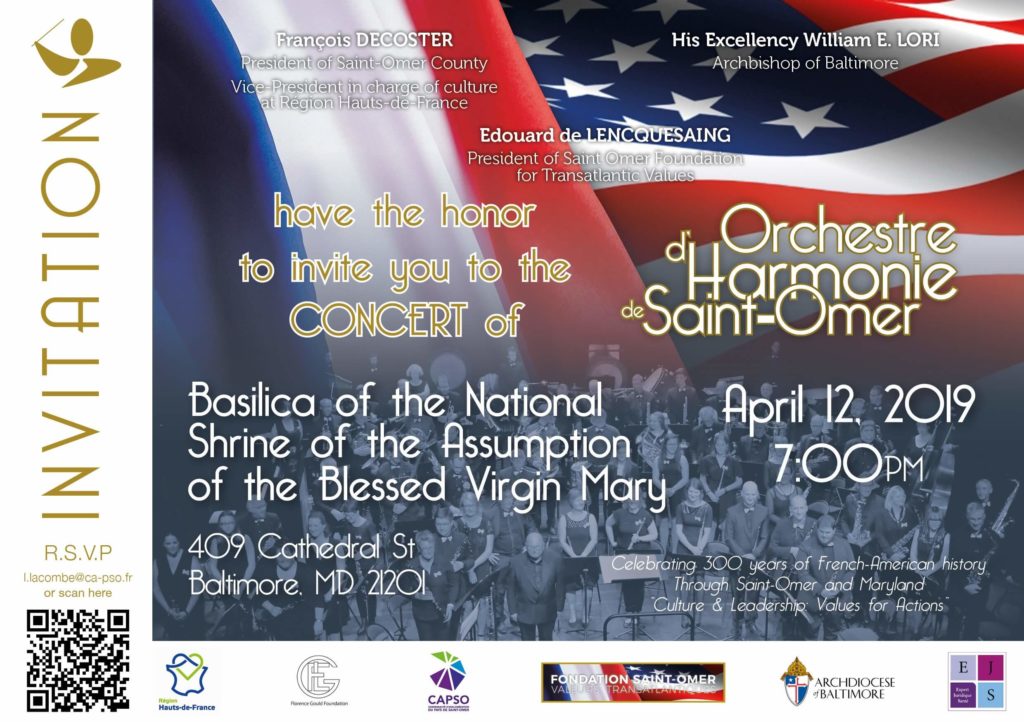 In the 17th and 18th century, affluent American Catholic families sent their children to France, and particularly to Saint-Omer so that they could study in the College of the Jesuits. As in England at the time, Catholic education was not allowed in the colonies. Among them were three children of the Carroll family who attended the school in the mid-1700s and later became prominent figures in American history:

Significant families educated at the College of English Jesuits also included the Calverts and Neales, among others. Today research studies the influence of the education at Saint-Omer in the career of those families and in the American nation.

The cooperation between Saint-Omer and Maryland is largely supported by the Saint-Omer Foundation for Transatlantic Values, founded in 2017, and whose aim is to highlight the cross-cultural heritage and to strengthen the values of culture and leadership in the Franco-American relationship while facing the common challenges of both societies today.

Archbishop William E. Lori visited Saint-Omer in October 2017 for the rededication of the Chapel of the Jesuits and a symposium on religious freedom. Other descendants of the Carrolls also attended the events, as well as Maryland Lt. Gov. Boyd K. Rutherford and Maryland Secretary of State John C. Wobensmith.

Free tickets to the April 12 concert are available at https://sowo-baltimorebasilica.eventbrite.com. The Basilica of the National Shrine of the Assumption of the Blessed Virgin Mary is located at 409 Cathedral St., Baltimore.

Town in France that educated Carrolls reaches out to Baltimore

Masses highlight differences and connections between France and U.S.