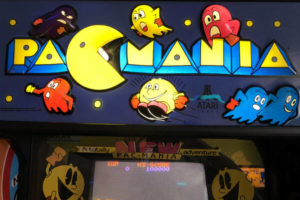 Although I grew up way back in the 1900s, as my children like to say, I often feel I failed to absorb much of the pop culture of the ’70s, ’80s, and ’90s. And arcade games are definitely on that list.But when my husband mentioned that he had heard about an arcade just over the Pennsylvania line where you can play classic arcade games, I was immediately curious.

Our boys love video games. But since they are used to the incredible graphics, speed, and sound effects of today’s video games, how would they like these older games?

So when we found a few free hours on a Sunday afternoon, we climbed into the car and drove up to Hanover, Pa., to Timeline Arcade. 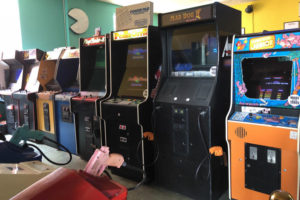 The arcade is on the top floor of an old building just north of the square in Hanover—a town I once called home for about six months and where I worked for about four years as a newspaper reporter.

The boys raced up the steps to get to the games. 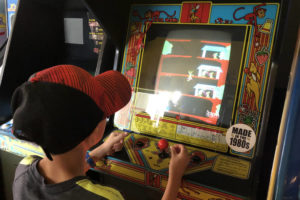 I decided not to play myself, so I could watch everyone else enjoying themselves and take a few pictures. I regretted that only a few times, mainly when I noticed the Tetris game.

But I figured I would be trailing our boys most of the time, and I knew my husband would be playing. Unlike his pop culturally illiterate wife, he remembers growing up back in the 1900s, and he definitely enjoyed his arcade time then.

And he and our sons enjoyed every minute of that hour. The boys raced from game to game, intuitively knowing how to handle the controls at each one, trying to beat high scores, and then running happily off to the next one. 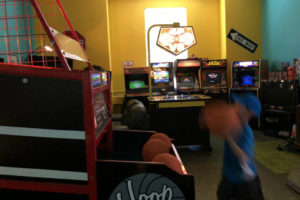 Apparently knowing the best game systems 2018 offers also prepares you for games that were invented when your parents were children. And, as it turned out, the skee ball and basketball game weren’t much different from the ones we play today at the beach arcades.

At the end of our hour, we were on our way.

And it was only on the way home that I realized that one of the best parts of Timeline Arcade was that there were no prizes.

As much fun as it can be to collect yards of cardboard tickets and use them to pick out an inflatable sword and 17 Tootsie Rolls and four multicolor tops, I loved that we just had fun and enjoyed the games.