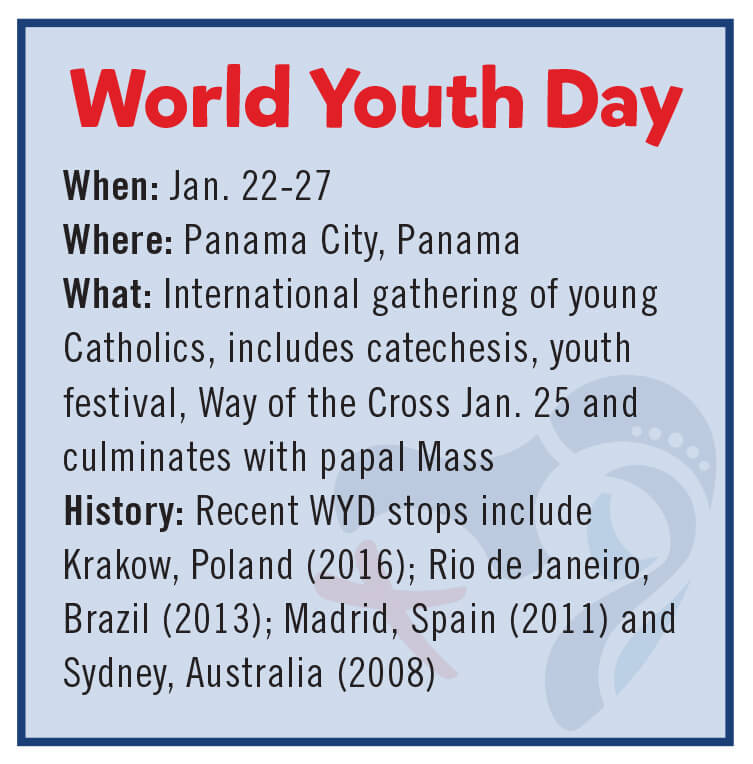 The Archdiocese of Baltimore contingent headed to World Youth Day has a strong Hickory flavor.

Of the 10 people going to Panama in late January for the international gathering of Catholics ages 16-35, four are men in their teens and 20s from St. Ignatius, Hickory, Parish in Forest Hill. All four are traveling thanks to the generosity of fellow parishioners and their pastor, Monsignor James M. Barker.

Held every two or three years, the concept of World Youth Day began in 1984 in Rome, at the direction of St. John Paul II. It captured Monsignor Barker’s attention in 1993, when it went to Denver, the first of only two times it has been held in North America.

At the time he was director of vocations for the archdiocese; the host archbishop was a Baltimore native, now-Cardinal James A. Stafford.

Monsignor Barker “tried to take as many of our seminarians who wanted to go” to Denver, and remains moved by the estimated half-million people who gathered in the Mile High City.

“To see the Holy Father in this country and see the enthusiasm for him was incredible,” Monsignor Barker recalled. “It’s similar to when he came to Baltimore (in 1995). The cheers when he came on stage in Denver … you don’t forget that. It’s something I want our young people to experience.”

With the cost of attending this World Youth Day pilgrimage approximately $2,500 per person, his parish began a fundraising effort in early 2016. All four from St. Ignatius Hickory are former sacristans. Monsignor Barker has been at the parish for 17 years, and figures “he probably gave them all their first Communion.”

The youngest is Jake Burrows, a freshman at the University of Maryland, College Park. The oldest is Ian Longenecker, 26, who’s completing the Associate-to-Bachelor Nursing Program through Harford Community College and Towson University. He will miss the first day of the spring semester, albeit with a very good excuse.

“This is a once-in-a-lifetime opportunity,” Longenecker said. “To be with a bunch of people of the same faith from all around the world, and to enjoy fellowship with them, that’s very exciting. Plus, there’s the opportunity to see the pope.”

The others from St. Ignatius Hickory are Pat Collins, a 2015 graduate of Calvert Hall College High School in Towson who is majoring in theology at Mount St. Mary’s University in Emmitsburg, and Joseph Weber, 21, who was home-schooled and is employed as an electrician.

Weber was adopted at age 9 from the Philippines, which holds a special place in World Youth Day lore, as the 5 million who attended the event there in 1995 was described as the largest religious gathering in history.

While Longenecker has been to Italy and Ireland with family, Burrows and Collins had to get their first passports for the trip.

St. Bernardine in West Baltimore embarked on a similar effort to send one of its young parishioners, Brandon J. Pinkney, who is the principal of Walter P. Carter Elementary/Middle School in Baltimore.