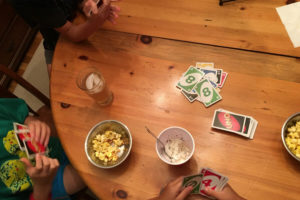 We hosted our first sleepover for one of the boys’ friends last weekend.

I didn’t know how to prepare, so I made sure we had popcorn and chocolate chip cookie dough ice cream on hand. The boys ate loads of snacks and played hard. I hoped they would fall right to sleep.

What is it about sleepovers that are so much more exciting than ordinary play dates? I’m not sure. But lots of nighttime snacks? A few rounds of Uno? No real sleep until late at night? Amazing. You can be sure we’ll be doing this again.

Anyone else in denial about the school year starting? It’s a good thing it’s not starting until after Labor Day here in Maryland because I just want to cling to this vacation for dear life—and it’s not even my vacation. It’s just that our sons have had the best summer vacation I can ever remember.

And most of the reason for that is that our summer sitter has been amazing. She sat for them for a few weeks last summer, so I knew how awesome she was. But this summer was even better because she and our boys just slipped right into their summer days with excitement and an understanding of how to make the most of their time together. This year that meant lots of things, including many games of Pugopoly.

Today was her last day with them, as we prepare for a week of camp, followed by a staycation week with me. So we thanked her with a restaurant gift card and a pug umbrella.

We had no power at our house all day yesterday while the electric company trimmed the trees in our area. When we realized the electricity was going off at 8:30, I started making breakfast and Leo started playing video games. Thank goodness our priorities were in order.

Today I’ve been trying to figure out what in the refrigerator is still edible. I think the answer is not much, and we’d better eat our way through the frozen food in the freezer pretty quickly.

I should probably throw a party tomorrow and cook up all the food. 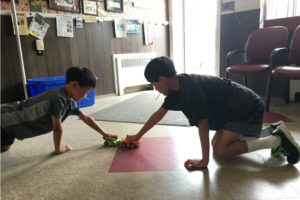 Even though I’m pretending summer might last forever, we did go for back-to-school haircuts last week.

As we were walking down the street together, a man who looked like he was Chinese-American gave us a big smile and made what looked like a check mark with his hand in the air.

All of a sudden I was back in China where words weren’t necessary and people were always beaming at our children.

Next week we’ll celebrate the sixth anniversary of the day we met Daniel. I can’t remember life without him, and yet six years has flown by. It seems as if our sons have been brothers forever.

I know I am so blessed to be a mother to two children who will be playing soccer this fall. I also know there is a certain thrill to running kids to three different soccer practices and two games a week.

But I’m not exactly looking forward to soccer season.

Just to start things off on the right foot, a few weeks ago when the mom organizing things emailed to ask me to send the names of two children my son would like to have on his team, I accidentally hit “reply all” instead of “reply.”

Luckily I didn’t say something like, “Anyone as long as it’s not Rudolph,” or “Forget my son. I just want to know that I won’t be on the sidelines with that mom who drives me up a wall.” I merely listed a whole bunch of children he considers his friends and then said he would probably want two boys in particular.

But I felt awful about it. In good news, this season can only exceed my expectations. 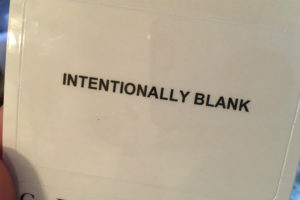 When we opened the mail the other day, I found an insurance card and a space that said, “Intentionally blank.”

But, of course, the card is not blank.

By its very nature, it’s filled with two words. Maybe they should rethink the wording there.

It’s probably bad that I sit and wonder whether there was a whole committee formed to decide how to deal with this issue before they decided on that phrase.

It might even be bad that I make it a quick take. So let’s just consider this quick take is intentionally blank.

After our vacation, I returned to work on Monday and found an envelope in my mailbox. Inside were photos from a trip a team of Loyola faculty and students took in 1954 to do research on the solar eclipse.

I was so impressed that my colleague who works in another part of the university had thought to send this to me at just the right moment. But when I reached out to thank her, she had no idea what I was talking about. After I showed it to her, she remembered getting the envelope from a graduate she had met with three years ago.

We are guessing the envelope was unearthed during a recent office clean-up, but we will never be able to explain why it appeared the week before the 2017 solar eclipse. I posted the story and photos here.

Isn’t that an amazing coincidence? I was over the moon.