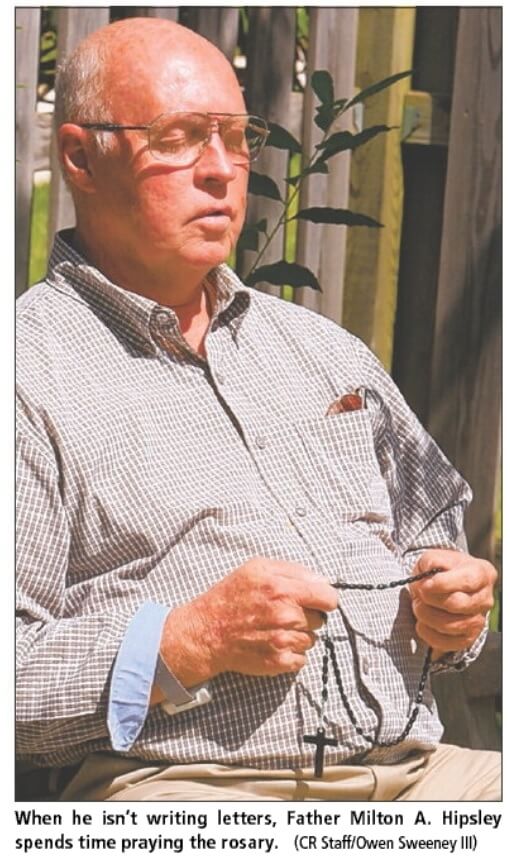 After attempting suicide several years ago at a Cumberland penitentiary, a prisoner spent his days lying alone on the floor of his tiny cell. Staring at the ceiling and speaking few words, the man seemed lost.

Father Milton A. Hipsley, then the pastor of St. Mary in Cumberland and a chaplain for the area’s prisons, was moved by the man’s despair. Wearing his black clerics and white collar, the priest entered the cell and got down on the floor beside the motionless figure. He became a channel of God’s mercy.

“Inmates are good people,” Father Hipsley remembered. “They are lonely and they’re frustrated. If you go in and show kindness to them, it’s like showing attention to the barking dog. If you pet the dog, it starts to lick your hand and become like a friend.”

After 16 years visiting prisoners and ministering to parishioners in Allegany County, Father Hipsley faces his own kind of confinement.

Diagnosed with Alzheimer’s disease in 2008, the 72-year-old priest had to give up his cherished roles as a pastor and chaplain. He now lives at St. Stephen’s Green on the campus of Mercy Ridge Retirement Community in Timonium, wearing a special bracelet so medical staff can monitor his location.

Father Hipsley longs to return to his beloved Cumberland and resume his pastorate and chaplaincy. As that’s not possible, he’s found a new way to minister – a method suggested to him by Archbishop Edwin F. O’Brien – one that lets him reach out to people. Its impact transforms him as much as those it serves.

It’s a ministry of pen and paper.

Father Hipsley’s letters to The Catholic Review, numbering more than 30, are a sample of the hundreds he has written in the last two years.

In capital letters with each word carefully underlined, printed words flow across lined pages in poetic symmetry. The paragraphs seem to form perfect box shapes, with two sentences at a time usually fitted between blue-ruled lines. A few misspelled words dot the texts.

Using black, blue and red pens, the priest tackles the importance of praying the rosary and contemplating nature. He extols the virtues of solitude, and urges prayer and kindness.

Sometimes he asks for stamps, so he can dispatch more letters.

“All of us agree,” Father Hipsley wrote in a Jan. 12 letter, “that there are many hospitals, orphaniges (sic), retirement homes, as well as many who are friendless, with no phone calls, cards of ‘hope you are well’ or ‘thinking of you.’”

Don’t suppress the God-given ability to love, he begged.

“Smile at the neighbor,” he wrote, “wish the enemy a ‘good day.’ Pray for those sick, divorced, incarcerated, homeless and confused.”

In a Jan. 29 letter, Father Hipsley spoke of worries.

“As the small bird chirps high above the tree branch,” he wrote, “so also prayer is a personal advantage for one who chooses to embrace it. Praying by use of the rosary is a quiet personal way of relieving stress and tasting calmness!”

‘An expression of the you’

The son a Baltimore City police officer, Father Hipsley grew up in the West Baltimore parish of St. Edward. He had wanted to be a priest from his youngest days, often setting up his mother’s ironing board as an “altar” to play priest with his five siblings. After serving in the U.S. Army, he was ordained in 1970.

The priest’s assignments included ministering as associate pastor of St. Clare in Essex and St. Charles Borromeo in Pikesville before he was named pastor of St. Thomas Aquinas in Hampden in 1983. He became pastor of St. Mary in Cumberland in 1992.

Father Hipsley talked of his love for letter writing as he relaxed in a library near his room at Mercy Ridge on a hot June day. The stocky priest devotes much of his day to penning short missives, sending them to family, friends, former parishioners, newspaper reporters and strangers.

“It’s an expression of the you – of the self, so to speak,” said Father Hipsley. “When I reflect on my letters, they could get some insights.”

“It’s his only salvation,” she said. “He feels like he’s helping other people. I tell him that the people at his parish haven’t forgotten him.”

Carolee Lucas, secretary of St. Mary, said parishioners look forward to receiving their former pastor’s mail. He meant everything to their faith community, she said, and it has been difficult to see him leave.

“As soon as someone gets a letter, they share it with everyone,” said Lucas, who saves every note. “He was the kind of priest who was always here for the people. His religious vocation was his whole life. He could care less about the outside world.”

Champion of the underdog

Father Hipsley earned a reputation as a champion of the underdog who held a special place in his heart for the incarcerated, Ruppenkamp and Lucas said.

Prisoners were grateful for his frequent visits, which included opportunities for confession. One prisoner confided to the priest that if there were ever a riot, he would throw himself on top of Father Hipsley to protect him. Using threads from his prison uniform, another inmate crafted a cross for the priest as a gift.

Soon after Father Hipsley retired from prison ministry and could no longer visit inmates, he stood outside the prison gates. Wearing a stole, he made the sign of the cross in the air and offered absolution to all the men inside who were truly sorry for their sins but were unable to confess to a priest.

Lucas and Ruppenkamp said parishioners miss their pastor deeply, but understand the reason for his absence.

They first noticed Father Hipsley having some problems with his memory several years ago. Sometimes he would forget that he had put the keys to the tabernacle in his pocket or he would open the church at the wrong time of the day. The two parishioners helped him track his medication.

When he’s not writing letters, Father Hipsley spends time in a garden praying the rosary. Most of his prayers are for others, but he acknowledged that he asks God for help with everyday things.

The priest also prays that more of his fellow clergymen would visit.

“If I’m ever in touch with a priest, it’s usually a situation where there’s an event,” he lamented, “but not like a friend who will come by and spend time with you. If I get near a priest, if he’s free, I’ll lean right next to his shoulder and make a good confession.”

Asked what advice he would have for those confronting major challenges, Father Hipsley said they should “concentrate on serious prayer.”

“If they are devout in their prayer,” he said, “then they have security in facing whatever their situation is that they are going to endure.”

A few minutes later, the priest closed his eyes and clutched his well-worn rosary.