EMMITSBURG – Father John DuBois was hiking in the Catoctin Mountains 210 years ago when he noticed a light flickering in the woods.

Following the rays, the Sulpician priest and founder of Mount St. Mary’s Seminary and University discovered a great oak whose trunk was hollowed out by a stream.

Reminding Father DuBois of a grotto, the recess inspired the future bishop of New York to build a simple cross at the site, followed by a church. He intended the spot as a place of prayer and devotion to the Blessed Virgin Mary.

From those humble origins was born what is today known as the National Shrine Grotto of Lourdes, located on the campus of Mount St. Mary’s.

In Father DuBois’ day, only a few people prayed at the outdoor site. They included St. Elizabeth Ann Seton, who taught children’s catechism classes while seated on a large rock.

Today, the National Shrine Grotto of Lourdes annually attracts more than 400,000 visitors from across the country and around the world.

It became a public, national shrine 60 years ago around the same time Monsignor Hugh Phillips, a former chaplain, oversaw major improvements that included the building of a 95-foot tower that holds a 25-foot, gold-leafed, bronze statue of Mary.

“People come here because they are looking for answers, peace and serenity – and to just get away,” said Lori Stewart, the shrine’s director.

She said there has been a noticeable increase in the number of visitors in the last decade, to the point where an existing chapel and outdoor seating area by the grotto cannot hold all the weekend visitors. The shrine cannot easily accommodate those with physical disabilities, and there are sometimes difficulties with parking.

After getting input from visitors and conducting a study, shrine leaders have come up with a vision for the future that would address some of those challenges while expanding spiritual offerings.

A: Adding new parking, possibly in the form of a garage;

B: Adding cemetery plots and a cremation columbarium to the cemetery;

C: Expanding the picnic space to include a pavilion;

D & E: Making outdoor access to the seminary and university easier with stairs and landings;

F: Building a second floor onto the existing glass chapel and converting it into a spiritual retreat center;

H: Building a new church near the existing visitors’ center;

I: Restoring the amphitheater; and

J & K: Adding outdoor seating and additional space for candles near the grotto. 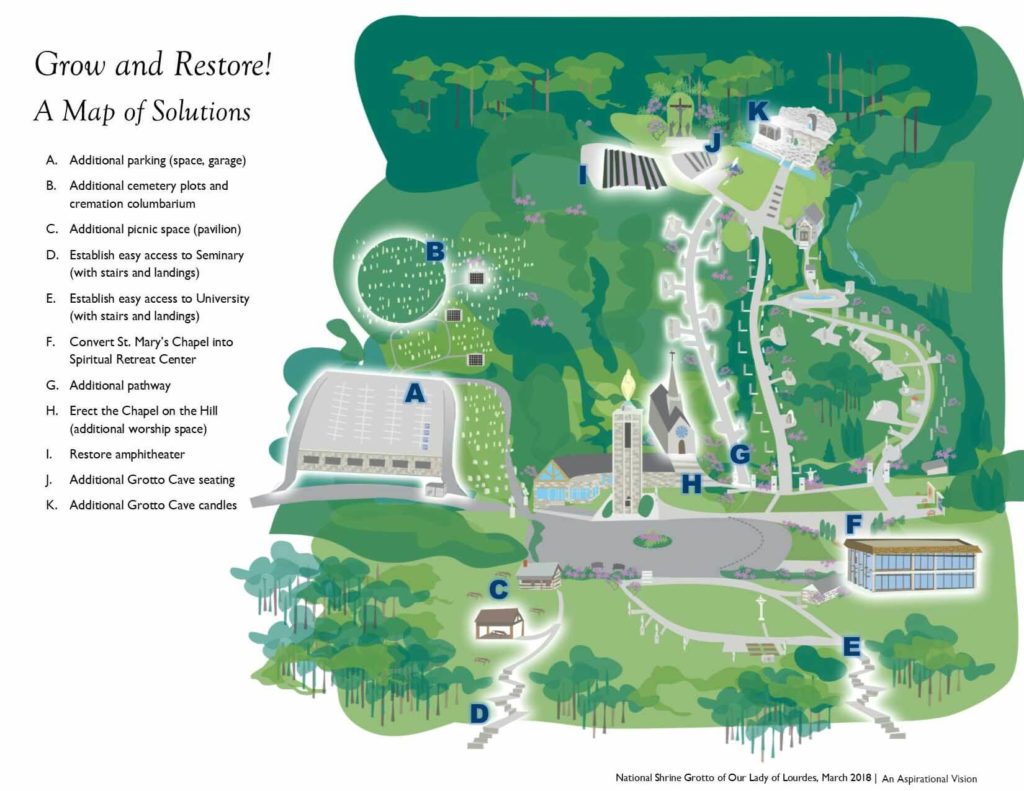 “We’ve put a lot of discernment into this,” Stewart said. “We’ve really listened to our pilgrims.”

The shrine has not conducted a formal capital campaign for its multi-million dollar vision, but has already begun receiving financial support. Some projects, such as adding candles near the grotto cave, have already begun.

Institute of the Incarnate Word Father Daniel Mentesana, chaplain of the National Shrine Grotto of Lourdes and a former architect, has drawn up a design for the new church, which he hopes will also include a dining hall in its basement.

Together, the proposals will allow the shrine to better meet the spiritual needs of visitors, he said.

Converting the existing glass chapel into a conference center will let the shrine’s staff offer multimedia presentations about “the fundamental truths of our faith, methods of prayer according to the great Christian spirituality, reading of the Bible and more,” he said, while a new church will allow more people to attend Mass and other liturgies.

“The main motivation behind all of this is to recognize that Mary is a mother with arms open, who invites her children to come and receive that gift that has been given to us: Jesus Christ,” he said. “It’s for the glory of God and the souls entrusted to our care.”

Listen to a radio interview with Lori Stewart here.