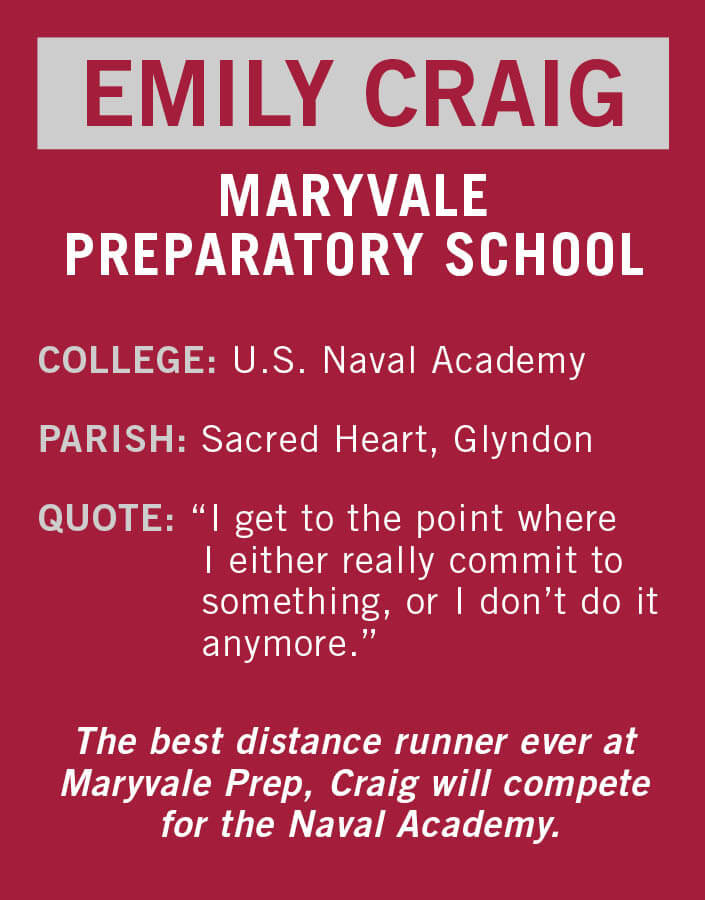 LUTHERVILLE – To the dismay of corporate recruiters, Emily Craig’s  cyber security career will have to wait.

Ready for Plebe Summer at the U.S. Naval Academy, Craig will soon be immersed in the national defense aspect of her favorite course of study. According to the technology coordinator at Maryvale Preparatory School, however, her learning curve will not be steep.

“Emily asked me numerous times to give her code to work on that was more challenging,” said George T. Kapusinki, who taught her AP Computer Science and Engineering through Robotics. “She wanted to code tougher questions, so she could learn faster.”

“(At) a hackathon at the University of Maryland, some prestigious companies tried to hire her. I had to tell them she hadn’t started college yet.”

Craig’s interest in the Naval Academy can be traced to her father, William, a former Marine who is an aviation mechanic, and the swim meets in which she competed there.

“I’ve been wanting to go to the Academy since I was in middle school,” said Craig, who turned to running as a Maryvale eighth-grader. “I get to the point where I either really commit to something, or I don’t do it anymore.”

The best distance runner ever to come out of Maryvale Prep, Craig aced  the Academy’s physical test.

All of 5-feet-2-inches, she was the Interscholastic Athletic Association of Maryland cross country champion as a junior, and runner-up as a sophomore and senior. She capped her scholastic career by taking the 3,200 meters at the IAAM outdoor championships.

Her academic distinctions are just as quantifiable.

Craig helped her school compete for a coding spot on the International Space Station through the NASA/Massachusetts Institute of Technology Zero Robotics Challenge, and was one of five Maryvale Prep students in the state’s SeaPerch Underwater Robotics championship.

Craig looks forward to protecting her country against hackers.

“I’ll be trained to make sure that doesn’t happen again,” she said.